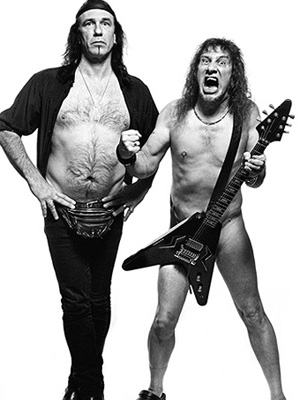 According to the L.A. Times, Canadian metal band Anvil, the subject of the excellent Sacha Gervasi-directed documentary, Anvil! The Story Of Anvil, have recently shot a cameo in Michel Gondry’s The Green Hornet. Michel Gondry, who is a long time Anvil fan, included a concert scene in the film in which the metal band literally explodes .

The cameo is raising a lot of speculation about the time period in which the movie is set. The Green Hornet mainly appeared in the 1930s through the 1960s as a series of radio shows, film serials, and a television show. The Hornet franchise then disappeared; the band’s appearance would indicate that Gondry has set the film in a contemporary era.

The documentary, Anvil! The Story of Anvil, chronicles the band’s brutal 30-year struggle to get even a modicum of recognition.  It seems that 30 years of hard work is finally paying off with the likes of Coldplay, Keanu Reeves, and Conan O’Brien raving about the film, giving the band its first taste of hipster credibility.

Anvil! The Story of Anvil is now available on DVD.