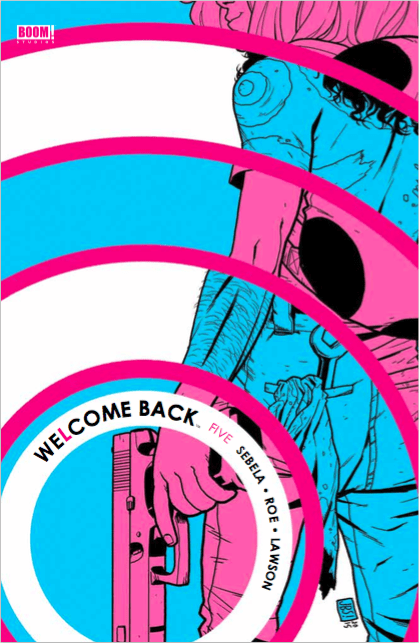 Man, Sebela and Roe really know how to make their audience wait for it with this book.

If you just read the first volume of Welcome Back, you’ll be happy to know that the follow up with #5 is already out. However, you might be thrown off just a bit to hear that the entire issue is about Lorena, the Sequel who was Mali’s serial killer stepdad in a previous life but is currently a ten year old girl in this one. The suspense of the fates of Mali and Tessa lasts the whole issue. Not to worry though, because little Lorena carries this entire issue rather well.

As the result of her actions back in issue two, this issue opens with Lorena learning that she has been demoted to a Grunt. However, her first action as one is to find out where Mali and Tessa went in the first place. With the help of a convenient death of an uncle and the help of two old Grunts named George and Julia Capra, Lorena sets out on her search, taking her to Kansas City, Omaha, Denver, and the Nevada desert, finally ending in Oakland after a week.

It could be very easy to make Lorena into the typical “badass little girl” trope, especially now that she’s remembering her past lives. However, Sebela and Roe do a good job at using that aspect of her past lives to humanize her even more. This especially comes through with the dog Showtime, who is now in her custody, and with a child only known as Kryztof, who she watches in a video on her iPad. While we never learn the context of who Kryztof or why she refers to Showtime as ‘Slyvia,’ it gives the reader more insight into just who Lorena is as a person after all this time. Not content to be a Grunt, but hesitant to turn her past life step-daughter in to whoever is up the food chain. The best scene of the issue comes courtesy of a visit to the grave of Mali’s mother, apologizing for not being able to protect her daughter more. 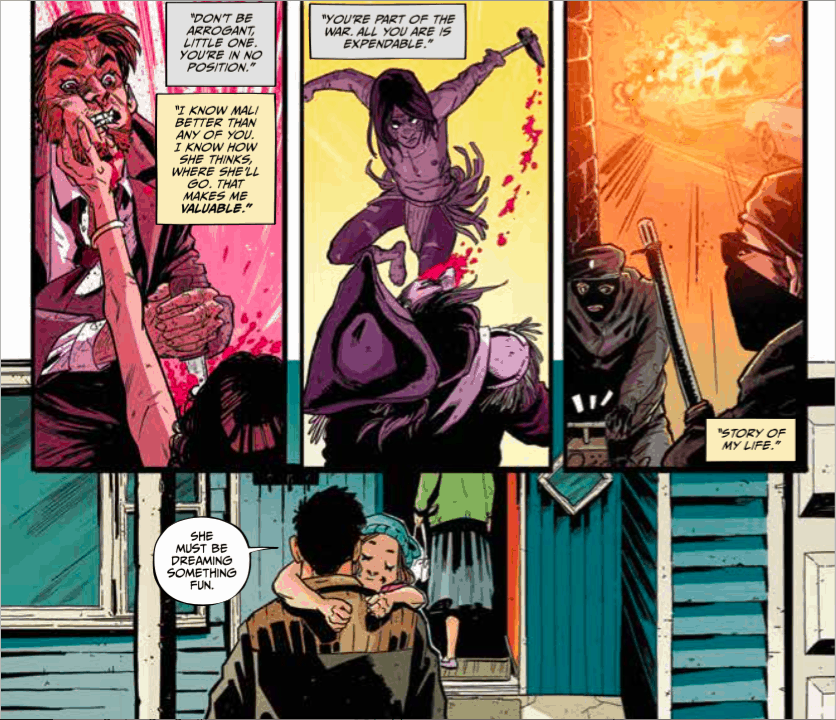 Of course, that softening only goes so far.

Roe is on art in this issue as the regular series artist, but Lawson is on colors instead of Carlos Zamudio, which results in a much brighter scheme than the first volume. It works out for the better though, since Lorena is so far so young in this life and it allows a nice contrast of her seemingly innocent looks compared to the horrors of everything going on in her life. The final scene with the Capras illustrates this contrast in the most perfect and horrific way.

While the return of Welcome Back doesn’t jump right back into the story of Mali and Tessa, it gives us a lot of insight into the mind and soul of Lorena. It scales back some from the route of making her another Hit-Girl and instead paints her as a hardened and tired soldier, looking for a way out and to know that the people she cares about are okay.

Plus, it has a big and adorable black lab in a cape. This book is great.