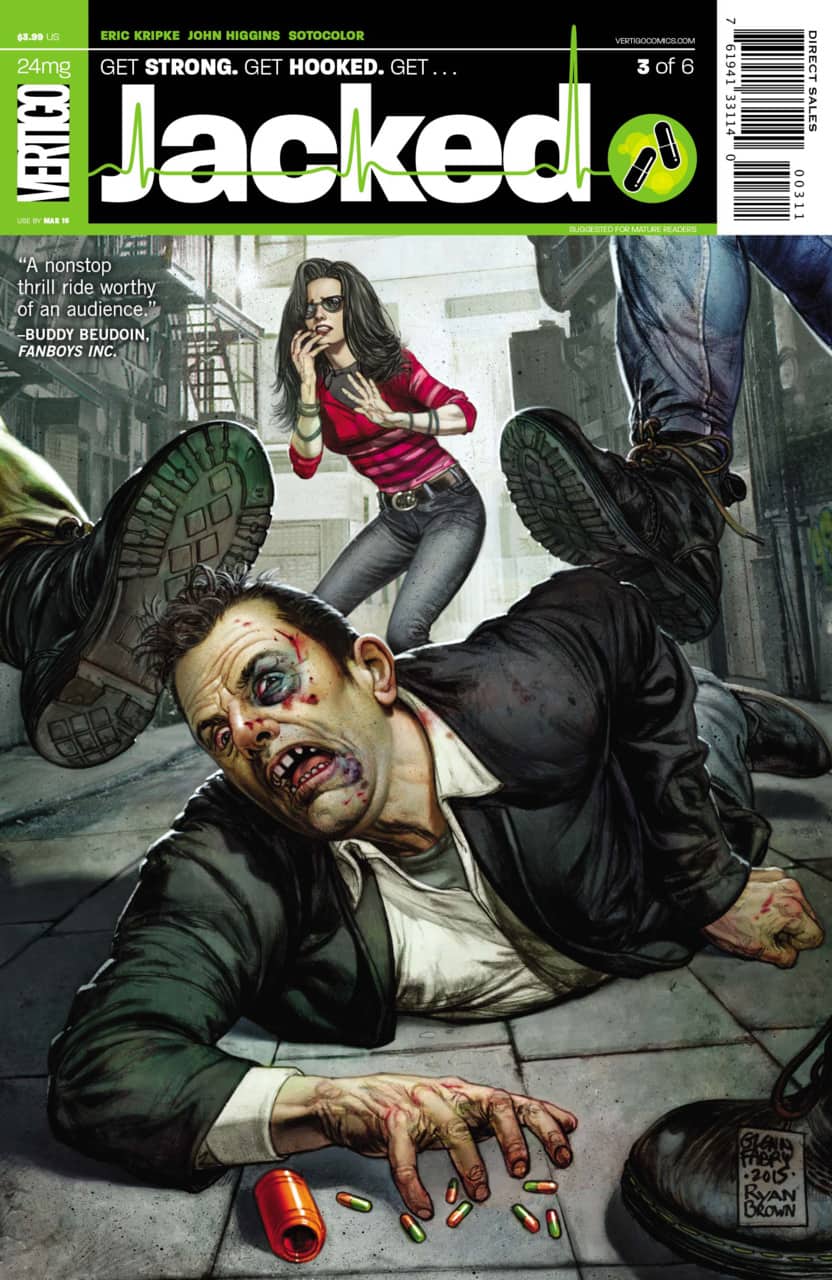 “I was about to search for ‘sloppy rim jobs’ when I decided to search for myself instead. Which, when you think about it, is another kind of jerking off. And you know what I found out? Nothing. Not one goddamn thing… What if this is my one and only chance to do something that actually matters? Something great? Something super.”

In his Hierarchy of Heeds, Maslow relegates Esteem – the label under which he enumerates such attributes as competence and self-confidence, recognition and self-respect – quite low, quaternary to Survival, Safety, and Society. Is it an indictment against the good judgment of Jacked protagonist Joshua Jaffe that his own priorities are so divergent from Maslow’s? After all, it is clear that his desire to make his mark upon the world is a need for Esteem from himself and others which has displaced every one of his more foundational needs.

Such certainly overrides his need for society. Whereas in previous issues Jaffe utilized his newfound strength and stamina to forge filial bonds with his boy or rekindle the romance in his relationship with his wife, here he curses out his child for inquiring who’d win a race between Superman and the Flash (the answer of course is the Flash) and to his wife outright lies, lacking the trust to confide in her concerning his condition.

But the desire to matter – to be super – also proves deeper and more driving than Jaffe’s concern for his own safety and wellbeing. Despite being a self-described “big fat pussy,” he places himself in harm’s way in his eventual confrontation with his kidnappers. Moreover, he goes so far as to endanger his own health, continuing to take unnecessary and non-prescribed nootropics with undocumented side-effects, knowing them to be addiction forming and resulting in periods of painful withdrawal.

Such seems to suggest Jaffe has misplaced priorities, but is his behavior truly all that different than the standard superhero fare? Classic characters continually cite their superheroics as the cause for failed relationships and dive headlong into danger, death daily hounding at their heels. Their alleged motivations might ostensibly seem more noble and altruistic, but Jaffe’s is certainly more honest and accurate. As a matter of personal experience, superheroes aren’t often out to save the world. They may pride themselves on doing the right thing, on service and self-sacrifice, but even in putting others before themselves, they’re putting their ego above all, feeding the narcissistic narrative that they’re the Good Guy, the protagonist of their personal hero’s journey.

Is such where Jaffe finds himself now, somewhere along the Road of Trials? Even three issues in, it’s not entirely clear whether Jaffe’s story will prove one of redemption or tragedy. More so than either of the first two, issue three lays out the fatal flaw that could prove his undoing: Jaffe’s deep-seeded desire to be a great man over and against any efforts to be a good man. Such could yet set the stage for a villainous heel turn, or a climatic self-actualization and atonement – or Jaffe could continue to amble along as an accidental hero, his lack of internality or introspection incidental to his accomplishments.

Of every book on the shelves these days, Jacked portrays a world most closely a mirror of the real, and has a hero which most resembles the reader. The questions it raises – Is Esteem a more fundamental need than Safety? Is greatness of equal import to goodness? – are of direct relevance to the reader, regardless of whether one pops pills like nootropics or not.