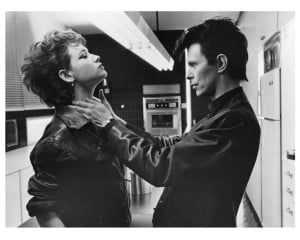 In his feature debut, director Tony Scott casts David Bowie as centuries-old vampire John Blaylock. A clever hook to lure the MTV audience, but the real stars of his film are Catherine Deneuve and Susan Sarandon, who play predator and prey. A Deneuve and Bowie manhunt in a disco as Bauhaus sing ‘Bela Lugosi’s Dead’ and a scene in which Bowie rots away in a hospital waiting room where the 20 minutes wait becomes a subjective century of aging, along with a thrilling climax hearkening back to images from EC Comics, make The Hunger all worth the watch. Shadow of the Vampire is a largely fictionalized but entertaining portrait of F.W. Murnau, whose 1922 picture Nosferatu became the model for all future films on the Dracula theme. Using an unrecognizable Willem Dafoe in the role of the obscure German actor Max Schreck and John Malkovich as Murnau, director Merhige captures a remarkable study of obsessive filmmaking that ranks as one of the best bio-pics ever made. The increasingly diverse French auteur Claire Denis directs a film that is profoundly disturbing, yet hauntingly unforgettable. Trouble Every Day is a modern-day horror story about a man and a woman, living thousands of miles apart, who are afflicted with the same self-destructive brain damage that affects their sexual appetites. Cinematically astonishing, looking, sounding and simply feeling like no other film in recent history, Trouble can be viewed as more of an oddity than a true horror film but many cinephiles will be thrilled at its strange and ambitious take on the horror genre. The score, provided as usual by the Tindersticks, carries the film along with a slow, menacing, edgy sense of unease, building up to a gruesome, bloody and unforgettable finale. Abel Ferrara’s 1995 horror/suspense experiment blends the urban vampire adventure with philosophical analysis. Scripted by Ferrara’s longtime collaborator Nicholas St. John, the film is really only superficially about vampires. The Holocaust, the My Lai massacre, and the philosophy of Heidegger and Nietzsche are just some of the themes and ideas Ferrara claims inspired him. Ferrara converts the old vampire mythology into a modern psychological horror story. Although unintentionally funny at times, the films is always entertaining and beautiful to look at. David Cronenberg’s underrated second film continues to develop his theme of bodily manipulation. After undergoing radical surgery for injuries from a motorcycle accident, a young woman (former adult film star Marilyn Chambers) develops a strange phallic growth on her body and a thirst for human blood. Vampire-like, she prowls the city of Montreal, using her sexual powers to attract victims. David Cronenberg’s film explores the relationships between sex and violence, and the slow corrosion of modern society. A slightly scary teen comedy on the horrors of adolescence. The Lost Boys is an exhilarating hybrid of horror and suburban comedy and perhaps Joel Schumacher’s finest film. Starring both Corey Feldman and Corey Haim, The Lost Boys will forever be a cultural touchstone of ’80s cinema. A film that documents all that was bad and good about the decade. The “epic” of epic vampire films, Interview with A Vampire broke weekend box-office records when it premiered and has since earned a spot in the pantheon of great vampire films. The gothic settings, superlative makeup by Stan Winston, stunning cinematography, murky tone, and good dialogue make for a compelling and engrossing a piece of entertainment. George Romero is famous for his trilogy of zombie movies, but Martin is his only vampire film. Gruesome, gory and one of the best vampire movies ever made, Martin is not for the weak at heart but if you think you can stomach its graphic violence, it is a must-see. This grim horror tale is a shocking, thoughtful reworking of the vampire myth whose protagonist just so happens to be a shy, alienated 17-year-old who thinks he may be a vampire.

What Near Dark does better than so many other movies of its kind is keep us off-balance and surprised. It is an amalgam of tropes and motifs from familiar genres, mixing in the likes of vampire legends, westerns and biker movies but reconstructed in such a way that the finished product is smart, creepy, violent, funny, and benefits from some wonderful performances, stunning visual texture, and music by Tangerine Dream.

A seductive retelling of the legendary tale, Bram Stoker’s Dracula is Francis Ford Coppola’s erotic, blood-filled blockbuster feast. Here Count Dracula is played masterfully by an irresistible and intense Gary Oldman and the eccentric Professor Van Helsing played by none other than Anthony Hopkins. The casting alone is worth the price of admission but we are still treated with some of the best art direction, cinematography and effects in any horror film. In fact Coppola opted to do all the eye-pleasing visual effects in-camera, utilizing shadow puppets, smoke, miniatures, and other time-honoured tricks of the trade. The result is a a visual style much like a storybook come to life. The earliest surviving film based on Dracula is Nosferatu, an unauthorized adaptation of Bram Stoker’s novel. One of the first vampire movies, it is perhaps on one of the best vampire movies ever made. Generally creepy from beginning to the last frame. Based on the novel of the same name by John Ajvide Lindqvist, who also wrote the screenplay, Sweden’s Let The Right One in is hypnotic, horrific, and it groundbreaking. It follows the classical rules of vampire mythology but takes those very same rules we are accustomed to and updates each of them in new and startling ways. Perfectly paced, and patient in building its atmosphere to set us up for some horrific moments. It has its moments of restrained fright, but never shies away from the gore when it’s called for.An instant classic of modern horror cinema and easily the most fascinating on this list.