If “Fast Lane” takes a firm stance on anything, it’s that family comes first. For the characters in The Flash, there is very little that won’t be done for the sake of family. A father betrays his friends for his captive daughter. A sister puts herself in the line of fire to get through to her brother. The emotional bonds that are inherent to being part of a family can, like romantic love, cloud judgment and make people say and do things they might otherwise not. It can be frustrating if those decisions veer too far off-character, but in the case of “Fast Lane,” the conflict presented by characters struggling with family matters is as believable as it is engaging.

Joe—not just the father figure to the show’s main character, but really the father figure of the show entirely—gets to let off some steam in “Fast Lane,” in which he punches not one, but two people who have endangered his children. One is somewhat of an afterthought: “Fast Lane” includes the villain Tar Pit, but, really, you could remove every scene in which he’s featured without the episode losing anything in the process. That said, Tar Pit is partially responsible for sending Iris to the hospital with a piece of glass in her shoulder, and Joe repays him in kind after Barry neutralizes his powers (again, the episode doesn’t really care about this story at all, despite using it as the cold open as if it would be the center of attention).

The more important moment for Joe is punching Harry, who confesses to betraying Barry and the team and owns the rest of the responsibility for Iris, since Barry could have caught the glass at full speed. This betrayal is obviously huge for the entire group, but Joe gets special attention in an episode that challenges his role as father. Iris pointing out that he’s treating Wally like a friend and not a son certainly resonates with Joe, who has to take a step back and analyze the way he’s going about things. It makes the instinctual punch to Harry all the more satisfying, but those instincts are the father instincts kicking in—the ones that Joe has been somewhat ignoring in an attempt to win over Wally. It’s exactly what we want to see Joe doing, because Joe is supposed to protect these people, even if he doesn’t have superpowers. His side comments about getting Harry into a cell so that he doesn’t kill him are those somewhat predictable scripting choices that can’t be taken seriously, but the sentiment is still interesting in light of Barry’s speech to Joe, Caitlin and Cisco after they’ve locked up Harry. To what extent would these characters go—characters who have already shown at various points in this series that their love of certain people gives them blind spots? 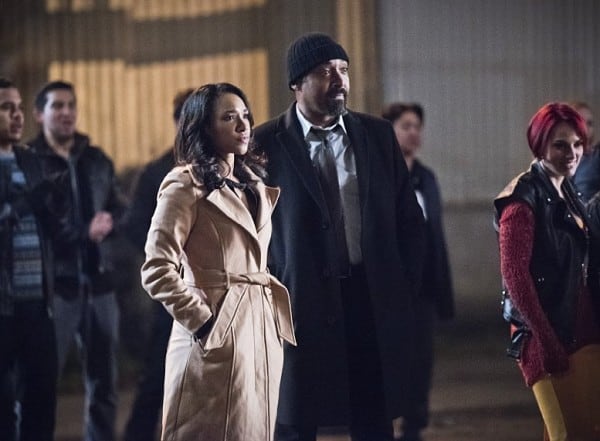 Harry, obviously, has to deal most directly with that line of questioning in “Fast Lane,” and it’s his story that is really the heart of the hour. After agreeing to help Zoom steal Barry’s speed, we finally see Harry go through with the betrayal. But each step is much more gut-wrenching than I would have expected, considering how effectively Harry has kept everyone at emotional arm’s-length distance. Harry calls Barry’s ability to read through texts “annoying,” but what he’s actually seeing in those moments in someone like a son trying to follow the footsteps of someone like a father. Even though this Harry has never been a mentor to this Barry—and even though The Flash hasn’t made any claim about what links characters to their doppelgangers—it just feels like any Harrison Wells (Earth-2, Earth-200, etc.) is always going to be drawn to Barry in a way that makes him want to help. Earth-2 Wells, thankfully, happens to make the right decisions for the audience: He shows that he’s willing to go through with his plan to save his daughter, but seeing the effects of that decision forces him to come forward and confess, leaving his fate in the hands of the people who let him into their lives perhaps too easily and too quickly.

“Fast Lane” presents all of that in a way that makes it easy to still like Harry in spite of the betrayal. Harry doesn’t want to kill Barry. He just wants his daughter back. And now that he’s found himself another form of family in Team Flash, he’s going to realize just how powerful the family unit can be when working at full capacity. On the smaller level, we see that in the hospital hallway scene between Joe and Wally, when Joe finally acts like a father, telling Wally he’s genuinely angry with him. That’s what the West family needs to get back on track and make Wally feel wanted and safe all at once. Undoubtedly, a scene like that is coming between Harry and the team—one that shows that their willingness to go along with him isn’t an act of insanity, but one of well-placed trust. Earth-2 awaits, and with it the chance for Harry’s redemption and full integration into the arms of people who do care about him.