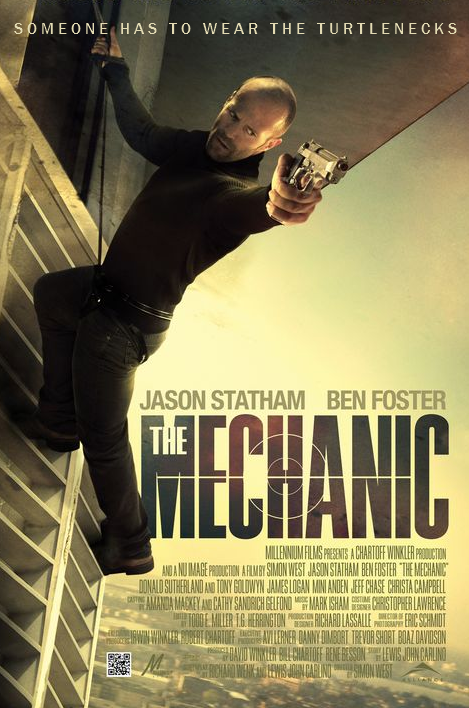 Jason Statham is the closest thing Hollywood has to an undiluted action star. Stallone’s grown too old, The Rock is struggling to leave Disney-flick purgatory, Gerard Butler seems to fare better in romantic comedies, and Vin Diesel is nowhere to be found. Beyond his early appearance in Mean Machine, Statham has never branched out into full-on comedic or dramatic territory, preferring to stick to what he does best: largely-stoic asskicking turns in largely-mediocre action films. As such, Simon West’s The Mechanic, a remake of the Charles Bronson vehicle of the same name, is an ideal property for Statham: it’s a no-frills, no-bullshit, ultraviolent affair with little in the way of comic relief, love interests, supporting turns or elaborate CGI to distract from its primary objective – blowing shit up.

Statham stars as Arthur Bishop, a “mechanic” (hitman) who specializes in jobs that are made to look like accidents, at the behest of a shadowy corporation overseen by soft-spoken suit Dean (character actor and occasional director Tony Goldwyn). When Bishop gets the order to execute his wheelchair-bound mentor Harry (Donald Sutherland), he is powerless to do anything except follow orders – leaving Harry’s ne’er-do-well son Steve (Ben Foster) devastated. Guilt-ridden, Bishop looks after Steve by way of training him to get back at Bishop’s employers and avenge Harry’s death. The casting of Foster as the perpetually lost Steve is key to the film’s relative success, lending the movie a weight it desperately needs in the face of its largely rote script. The role of the hard-drinking, vengeful son could have so easily devolved into whiny theatrics or one-note badassery, but Foster exudes a wounded toughness that plays nicely off of Statham’s stony confidence. The “training” portion of the film is its most engaging, with Foster finding himself the bait in an elaborate gay honeypot operation and getting the 101 on how to fake a death-by-autoerotic-asphyxiation. The film’s climax is aptly ridiculous, culminating in vehicular destruction of the highest order and a twenty-one-gun salute that will have haters of Goldwyn’s directorial efforts (The Last Kiss, Conviction) frothing at the mouth. In fact, The Mechanic is most disappointing when it tries to be tasteful, as in a kitchen-set showdown that doesn’t turn out to be quite as grotesque as it appears, and a climactic scene that thwarts what might have been a refreshingly nihilistic ending.

West (Con Air) keeps the action sequences relatively coherent, eschewing both Bourne-style hyperactivity and Michael Bay’s effects-laden mayhem, and thankfully amps the film’s violence to unexpected levels, particularly in the many one-on-one skirmishes. (Top prize goes for gruesome resourcefulness goes to Statham for his use of a fire extinguisher’s pin.) Foster’s nuanced turn, along with West’s pleasantly workmanlike direction and a distinct lack of flabby indulgence, help make The Mechanic a consistent, if hardly revelatory, addition to Statham’s long line of no-thinking-man’s entertainment.