This week, on Fringe: Even with Peter out of the equation, Olivia doesn’t like Fauxlivia, Walter is worried about Walternate, and Lincoln Lee finds his way to Fringe Division. Peter chills in mirrors and TVs, messing with Walter’s head and trying to be noticed.

The events of the season three finale left many questions unanswered. How would the Universes change without Peter’s impact upon them? Would Walter have even crossed over to the Other Universe in the first place, putting all of these events into motion, without the motivation of saving Walternate’s dying son? Pinkner, Wyman, and Goldsman answer these questions succinctly and well. Yes, Peter existed, but both versions died in childhood. Yes, Walter crossed over, creating the first cracks between the Universes, but he wasn’t able to save Walternate’s Peter anyways. Olivia was still detained in the Other Universe, but Fauxlivia took her there, now that Olivia didn’t a reason to go herself. Many questions remain unanswered, but they are ones that, honestly, don’t really matter. The brief catch-up we’re given is enough for now, and if more backstory needs to be filled in/rewritten for future episodes to work, we’ll find out about it then. 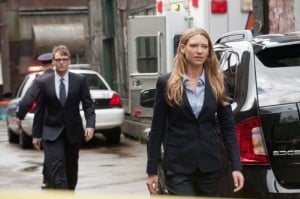 With Peter out of the picture, Fringe, both the show and the division, needs another member, someone for Olivia in particular, as well as Walter and Astrid, to play off of. The PTB wisely choose Lincoln Lee for this role. Not only is Seth Gabel a welcome addition as Lincoln, but it promises more appearances of Other Lincoln, who’s always fun. (He doesn’t seem to have an accepted nickname yet- thoughts on Clincoln, for “Cool Lincoln”?) Our Lincoln is in very much the same position as Olivia was in the pilot, and the writers wisely reference this. “Neither Here Nor There” is very much a reboot for the series, a perfect jumping on point for those who haven’t caught up with the previous seasons.

It’s fun to see Joe Flanigan here briefly as Lincoln’s partner. Though the two only share a few scenes together, their relationship is set up well and provides appropriate impetus for Lincoln’s need for answers. Flanigan, who was one of the highlights of Stargate: Atlantis, is good here, and it’s a shame that his shape-shifter avatar is assumedly dropped so quickly. The reintroduction of the shapeshifter element to the show is a strange choice that, at this point, could go either way. It feels repetitious and derivative, but if spun correctly, could end up feeling like more of an homage and part of a progression. For now, it feels like a retread, but the jury’s still out. 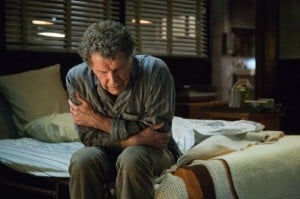 John Noble is fantastic as this slightly different version of Walter.  He is at the same time directly tied to the Walter we’ve seen when he’s at his lowest (after Peter’s rejection, in particular) and yet filled with a sadness that feels completely different and makes the viewer long for the happier Walter of previous seasons. In that way, he feels similar to season one Olivia, the character so empty after the loss of her fiancé that even a smile seemed painful. Astrid seems to be the only main character mostly unaffected. While this does make sense, as she had by far the weakest tie to Peter, it would be nice if there was some change, however small, in her life due to his absence, if only because it seems she’s been juggling Walter by herself over the past several years, rather than in conjunction with Peter.

The Observer’s decision to not erase Peter completely (and thank goodness that was left as scientifically vague as possible!) is an interesting one. It is obviously a necessary choice for the show to continue, but hopefully greater time will be spent on it in the future. The Observers are tricky- they are very effective in the series, and are certainly intriguing, but they feel like characters that can only be diminished by explanation. Putting an Observer’s choice, and that choice’s motivation, so clearly at the center of major mythology moments is risky, but the writers and producers have pulled those characters off so far, so hopefully they know what they’re doing and where they’re going. 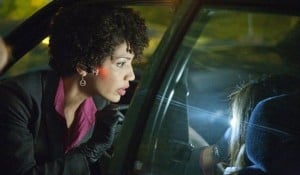 Fringe has grown tremendously since its first season. What started out as an iffy X-Files knockoff has become a worthy successor with the potential to surpass its predecessor. It is one of the strongest shows on network television and has provided what should be a star-making vehicle for Anna Torv, though the critical and fan community somehow doesn’t seem to recognize the fantastic, nuanced work she’s been doing for years now. Fringe has struggled for viewers for most of its run, and, though this argument will be lost on many ears, Fox’s early renewal of the series last year has eliminated any lingering frustration this viewer had with the network and its treatment of its genre programming (specifically Firefly). With its ratings continuing to decline, this is very likely the final season for Fringe, but if so, it looks poised to go out well, with interesting stories, compelling characters, and a penchant for narrative risk-taking that makes it one of the most fun series on the air.

What did you think of Fringe’s season premiere? Is “Clincoln” a legit nickname, or do you have a better one? Post your thoughts in the comments below! 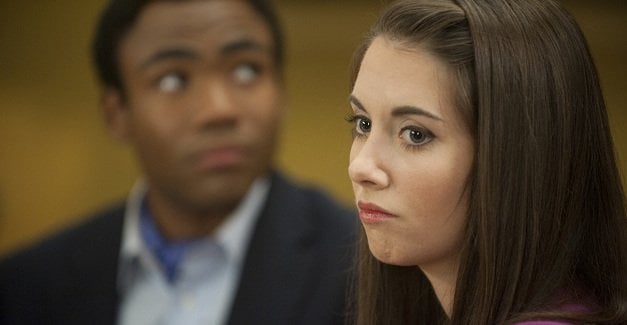 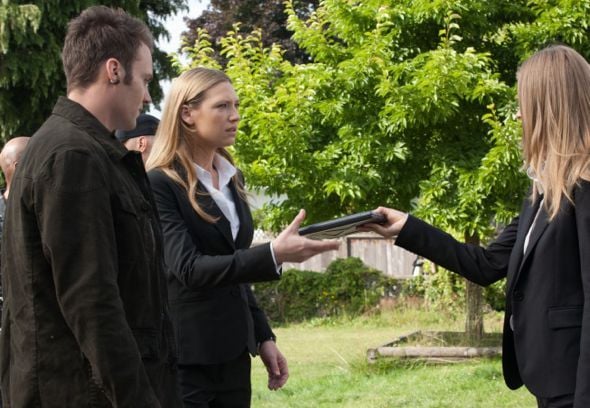