Galavant is somewhat of an enigma, like many hybrid genre shows are. It’s a musical-comedy-romance, and television is not always kind to shows with more than one descriptor. Shows with three word summaries, like “unlikely cop duo” or “firefighters in Chicago,” tend to be easier to describe. Easier descriptions led to easier marketing campaigns, which then led to more viewers. Trying to describe Galavant to someone is occasionally like trying to describe the color purple to an alien life form: “It’s a send-up of Disney musicals with a bunch of people from Downton Abbey as guest stars, and also there are hot guys with beards?”

Despite Galavant’s sometimes hard-to-describe premise, it’s one of the most inventive shows to air on network TV in recent years. It deftly combines catchy music with well-crafted characters, smartly subverting fantasy genre tropes as it tells the story of a hero named Galavant and the friends and foes he meets along the way. The show’s first season was little-watched but well-loved, and it beat cancellation odds to come back for a triumphant second season. ABC, the network which airs the show, made interesting choices about the airing schedule, doubling up episodes and putting them on Sunday night opposite big award shows and CBS procedural juggernauts. Yet despite its miniscule audience and strange promotional campaign, Galavant’s second season has grown in leaps and bounds over its first. This time around, the series located the character dynamics and humor that worked in the first season, and expanded on those in spectacular fashion as the season progressed.

The biggest revelation of the second season is Timothy Omundson’s Richard, a character that had his moments in the first season but almost seemed a completely different character in the second. Taken out of the antagonist role and reimagined as an overeager sidekick to Joshua Sasse’s smooth-talking Galavant, Omundson grows even more into his role as Richard. The first season forced Richard to be too dastardly, too conniving, an awkward contrast to Omundson’s natural sweetness, and the second season wisely let Richard be a bit kinder, a bit sillier. Although the show is called Galavant, the second season really was all about Richard, as he grew as a character, realized the mistakes he had made as king, and vowed to do things differently if he ever got the chance. The introduction of Clare Foster as Roberta, Richard’s childhood companion and love interest, made for not only a welcome female character, but also a way to continue to expand Richard beyond just simply an insecure former king. Omundson and Sasse also had excellent rapport, and the show replaced Galavant and Isabella’s romantically-charged banter with Galavant and Richard’s brotherly bickering. 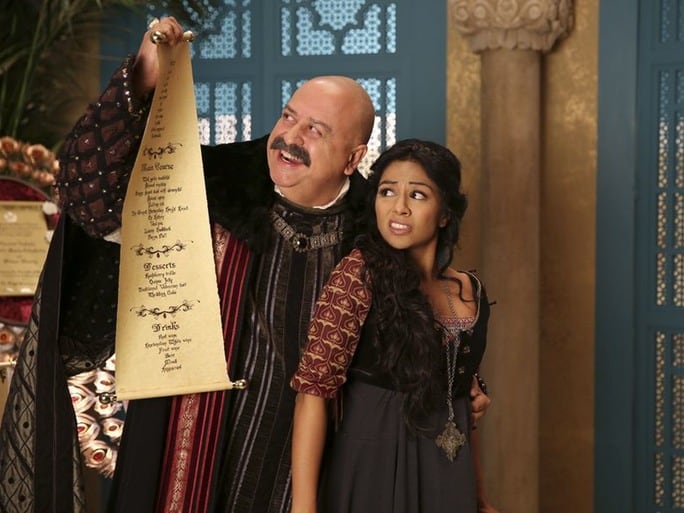 The second season overall sees all the characters deepen, as the show splits its stories between Isabella and her impending marriage to her 11-year-old cousin in Hortensia, Galavant and Richard’s quest, and Madalena and Gareth’s evil reign of Valencia. People fall in and out of love, guest stars come and go, and the show finds a balance between stand-alone stories and big season-long conflicts. The season comes sharply into focus when Isabella’s wedding planner Chester Wormwood, who had been trying to take over Hortensia by using magic and mind control to manipulate Isabella, is discovered and banished from the kingdom. Still thirsty for power, he teams up with Madalena and Gareth to start a war between the two kingdoms, joining together the main characters of the season for an all-out brawl. Galavant is a show that has more fun with character dynamics than anything else, but the war is the best staging ground for characters to face off against one another with some real stakes, playing on relationships and romances in the biggest way possible. The finale sees Richard claim his rightful place as the one true king to unite the kingdoms, complete with an Arthurian sword, a victory over the big villain, and a surprisingly swoon-worthy scene with Roberta. It’s a tidy finale, tying things up with weddings and new quests while still hinting at what a third season could look like. Also, there was a zombie army; that was a thing Galavant made happen.

Galavant wouldn’t be what it is without Alan Menken and Christopher Lennertz’s songs, and the second season is chock-full of earworms. The show plays with different musical genres so effortlessly that a West Side Story-infused song about giants and dwarves fighting each other is delightful rather than cringe worthy.  Everyone, even Gareth, gets a chance to sing, and the show boasts big romantic duets (“World’s Best Kiss”), Les Miserables anthems (“Today We Rise”), and explores what would happen if Miracle Max from The Princess Bride got a solo (“Time is of the Essence”). The triumphant, meta season opener, “A New Season” is Galavant in a nutshell: cheeky, self-referencing, impeccably crafted with everyone getting the chance to participate. Galavant’s jokes don’t always land, but there hasn’t been one bad song this season, and that’s something for a show that is about fifty percent music.

From music to characters to stories, Galavant is endearingly messy, somehow tying all of its opposing parts together each week to create 22 minutes of something endlessly entertaining. Not everything the show does is great: the entire enchanted forest story in the season opener played on tired and lazily offensive stereotypes, even if Kylie Minogue’s “Off With His Shirt” solo was a blast. Harping on Richard’s virginity and sexual inexperience feel lifted right out of 2005 in the worst way, and some of the story detours peppering Galavant and Richard’s quest felt expendable. These are minor details, though, in comparison to the entire season. There aren’t a lot of musical-comedy hybrids on television, and for a good reason: they are challenging to pull off, especially one that’s set in a fictional fantasy world. And yet Galavant makes it all work because of its sense of joy and wonder and fun. This is a show that explores the boundaries of what television can be, breaking fourth walls with reckless, wacky abandon, never taking itself or the medium too seriously. Every week it attempts something new, and while it’s not always the crowning achievement of comedy in our time, it is never, ever boring. In a television landscape of serial killers and brooding superheroes and enough legal dramas to last two hundred years, thank goodness for Galavant and its bright, peppy existence. Television is better off for its existence.