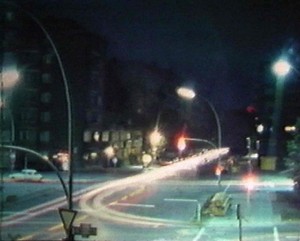 As the 20th anniversary of the fall of the Berlin Wall approaches on November 9th, many events are planned to mark the occasion and assess the changes Germany has undergone since reunification. In such moments, artistic considerations often take a back seat, but the Goethe Institut in London, whose remit is to promote German culture, is presenting a film series at several locations across the city, looking at underground cinema in East Germany and West Berlin, a first for the UK.

Of the two, West Berlin’s thriving Super 8 scene of the 1980s is much better known outside of Germany, spawning collections such as Berlin Super 80. Even at the time of their making, some of the films were shown in New York and London, receiving a better reception in the avant-garde circles of those metropoli than they did in West Germany. If the West Berlin underground filmmakers styled themselves as radical and transgressive, their east German counterparts took many more risks, as unlicenced film-making was prohibited in the GDR and they risked arrest. Even the act of picking up a Super 8 camera was circumscribed: it was the only technology available to amateurs, as only the Stasi, the ubiquitous security police, had video. Shooting in secret, they used the limitations to their advantage, creating their own worlds within their flats and then screening the results in private, word-of-mouth gatherings, known only to kindred spirits.

Generation Berlin Wall gathers a selection from two programmes that have screened separately in Germany — Gegenbilder, GDR Film in the Underground, and Who says concrete does not burn, have you tried? West Berlin Film in the ’80s. It seems appropriate the two should be united. Comparisons are inevitable. For a start, the West Berliners had access to a range of technology, and the films on show include not just Super 8, but 16 mm and video films, as well. The West Berliners, encircled as they were by East Germany, display a restless energy, tearing around the island city by foot and in cars, as if testing the limits of their boundaries. Narrative is largely absent, and experimentation with form is very much to the fore. Brigitte Bühler and Dieter Hormel’s a-b-city looks like an MTV video, with its quick cutting and time-lapse photography. Music is a prominent feature in these films, as they are largely asynchronous. The West Berlin band Einstürzende Neubauten appears numerous times on the soundtracks, their brand of industrial mayhem fitting the mood, apparently. But, the US group Pere Ubu is another popular choice. The East German films also employ music as the primary soundtrack, but seem to favour experimental jazz, the improvised quality of the music adding to the discordant visuals on show. How to describe the iconography? Skulls, reclining women and falling apples are recurring images that seem to symbolise death, sexuality and, perhaps, fertility. The gender politics of the comrades leave something to be desired: many of the male filmmakers only seem to cast women as passive, silent sex objects, quite odd considering the active role women played in GDR society. A pity none of the films of the Exterra XX group in Erfurt was included, as they feature quite bold statements from women behind and in front of the camera. One female GDR filmmaker who is included is the artist Cornelia Schleime, notable as an East Germany who emigrated to West Berlin before the fall of the wall. Her film Unter Weissen Tüchern includes shots of morose-looking young people gathered by the Spree, the river that served, at some points in Berlin, as a border. Perhaps these protagonists were prescient in seeing a future across the way.