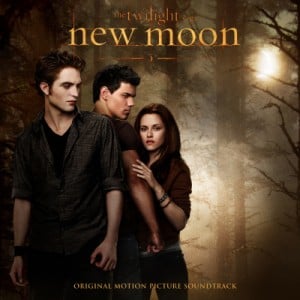 New Moon, as anyone frequenting any type of mass media would probably know, is the second part of the filmings of Stephanie Meyers’ Twilight Saga. This part, directed by Chris Weitz, has its release on November 20, and apparently the soundtrack sizzled as it hit the audience. The New Moon soundtrack is more expansive in styles than its predecessor. Again responsible for the song choices is musical supervisor Alexandra Patsavas, and it seems she has been destined to lift several bands out of obscurity and into the mainstream. Acts such as Grizzly Bear and Lykke Li are present, having previously been cult status performers. Carter Burwell composed the score for the previous movie, but this time the Oscar nominated Alexandre Desplat of The Curious Case of Benjamin Button and The Queen fame is in charge.

One has to admit that Patsavas has compiled a pleasing combination of styles. None of its moping and/or trendiness is overbearing. However, the extent to which the whole thing is premeditated is a bit sickening. There is nothing particularly exciting about the material, as the target audience has been addressed sufficiently. Much of the material is brooding in different shades; the one piece present from the score, the closing track New Moon (The Meadow) seems to underline this in its melancholic simplicity. The pensive, slow tracks overshadow the more uptempo ones, giving the album an overall sleepy mood. In the midst of it all, Muse, one of the biggest bands around at the moment, get to shine. Their groovy I Belong to You stands out on the album despite not being one of the band’s strongest efforts, and seems uncannily like a stylistic continuation to Supermassive Black Hole, which made an appearance on the Twilight soundtrack. A major disappointment arrives as the Death Cab for Cutie song written for the movie and released as a single. Meet Me on the Equinox is a real slump for the band who have had a run of successful hipster-quirky ditties.

No hit like Paramore’s Decode pops out on this volume, but it is guaranteed that the collection will be etched in many people’s minds as the legitimate soundtrack to fall 2009. Mood-wise it serves the purpose well. It is to be hoped that it will also have the benefit of getting its listeners interested in the artists present, for many of them belong in the most interesting groups active in this day and age.