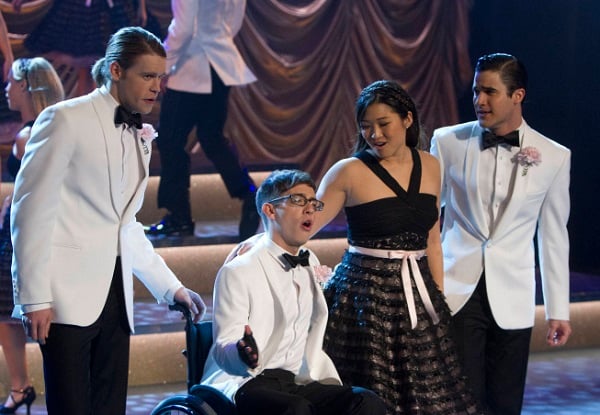 Glee‘s “City of Angels” is a sweet, sad end to the New Directions. What could be an underdog’s story of triumph is stripped away, leaving sadness and a sense of lost potential. Their loss at nationals is a pretty severe blow to fans and characters alike.

The continuity of the Finn story arc is refreshing. Many fans were concerned there would be little mention of the clumsy quarterback after the tribute episode, but the writers have proven the doubters wrong, providing a bread crumb trail as we are allowed to watch all these characters, especially Carole, navigate a life cut too short and the joy of having known him at all. Even though I have no idea how Carole and Burt qualify as chaperones (maybe they are Sam’s guardians?) or how Burt gets so much time off from Congress, it is easy to overlook these issues when it means more screen time for the pair.

The interaction between Sam and Will is a reminiscent hybrid of Sam’s relationships with Finn and Finn’s own relationship with Will. These moments being threaded through the rest of the episode, in conjunction with Sam’s fumbling attempt to rally the troops, is good story telling. It fits. It’s a passing of the torch which was  falsely handed to Blaine when he was named the new Rachel.

Tina just keeps putting her foot in her mouth, but at least she’s likeable and remorseful. Being chided finally quells her, instead of evoking the weird honey attack response it has in the past.  The creators must have decided she couldn’t go out as an the outlandish diva that they have turned her into this season.

Outside of the weird burlesque, beach ball Amazonian stage show, all the musical numbers are very satisfying. Skylar Astin shines as bad guy and Throat Explosion leader with a heart Jean-Baptiste. He’s funny in a way that treads the line of  over the top without crossing it and that boy has pipes- here’s hoping he pops up in New York. Perhaps we’ll see him fighting Blaine for an off-Broadway role?

I may be biased, but no matter how much I enjoyed the sci-fic vocal stylings of Throat Explosions, New Directions should have won and that fact makes the ultimate demise seem like a cruel ploy to officially move the show to New York. Not even Sue’s mean yet nice speech with Will can change that. Somehow Sue manages to seem like a human being as she slowly and almost kindly smashes the glee club into the ground with a final, calculated blow. On a related note, what kind of school cancels programs that get second place on a national level?

Despite my misgivings, this issue is sad and sweet and honest in a way rarely seen on TV shows aimed at teenagers and young adults. Now let’s see more glee, better jokes, and more comedy. 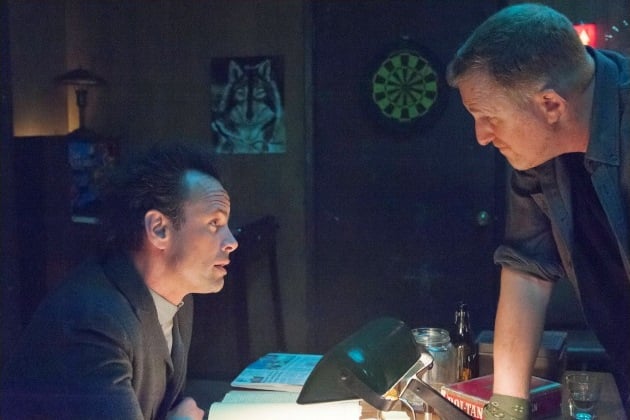