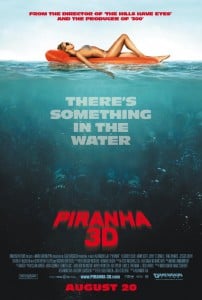 There is nothing particularly funny or poetic about the carnage in Piranha 3D. Even “disturbing” seems a bit too strong a word to describe the excessive, but still somehow palatably cartoonish bloodshed on display – can a film about pre-historic. bloodthirsty piranha really be disturbing? Tonally, this film is nearly impossible to pin down, and that is part of its appeal. It lends the film an air of unpredictably, while also aiding Aja’s apparent commentary on American exploitation films. While most of the film is played for laughs, the presentation of the human body as a sexual object as well as a source of food is purposefully conflated in an intelligent and engaging way.

This association, however, works with mixed effects. Purposefully or not, this film is not sexy: it presents very sexualized images which happen to also be very bland. Though this tends to work as there is little differentiating of the human body as a piece of meat (in the figurative and literal sense), the lack of genuinely arousing sexuality tends to underscore the strength of the prospective romance between the teenaged leads. Though Kelly (Jessica Szohr) certainly puts herself into sexualized situations and is never judged or punished for it, her chemistry with Jake (Steven R. McQueen) is nothing short of chaste. This development pushes for unnecessary moralism in a film that otherwise does quite a good job at deconstructing the tropes of the genre.

Piranha 3D quite successfully attempts to equalize the presentation of the female form. Though it very obviously has it both ways, the clever jabs at the false integrity of promoting sexploitation films as tributes to the female form make it worthwhile. This is explored during an early sequence where an adult film director shoots two of his actresses swimming and caressing underwater with Delibes’ “Flower Duet” as the soundtrack. This kind of “artistic” scene is not unusual in skin flicks posing as horror films, and they are as wonderfully out of

place here as they are there. The use of fading from one shot to the next, plus the overriding and consistently contradictory commentary from the director about both its artistic value and wanting to get just the right shot of his model’s ass is a brilliant summation of a lot of the ideas Aja is working with.

Elizabeth Shue is cast as the sheriff, and she fleshes out what is without a doubt the strongest role of the film. Though she could have easily been fetishized, or her strength diminished due to her being a woman, she remains one of the few characters in the film who is completely self-possessed. It also strengthens the film’s take on female sexuality and due to the strength of her performance without never feels like a token ‘empowered’ woman role. 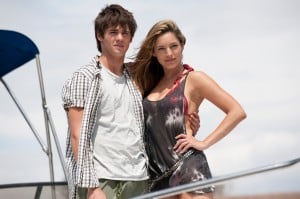 The film similarly uses its violence to literally turn people into meat. Not in recent memory has there been a film that is quite as bloody and gore-filled as this. The particularity of the piranha’s violence is that it rarely obliterates the entire human body, rather people are left half eaten or a little chewed up. Even for a monster film, the reduction of the body to food is rather extreme. There is really no real point of comparison in this regard, and the film drives home the images of half eaten bodies time and time again. They never become any less shocking, perhaps in part, because they often look like something you’d see in a slaughterhouse or a butcher shop.

Outside of the visual excess of the film’s violence and sex, the film’s humor is really hit or miss. The dialogue in particular just seems off; many of the one-liners feel tacked on or suffer from bad timing, and inevitably fall flat. It is only Christopher Lloyd (who channels himself circa 1985 with aplomb) who is consistently hilarious. However, to the rest of the cast’s credit, if everyone had channeled his energy level, the result would be slightly overwhelming.

This is a film to be experienced, though it is not for the faint of heart. It is brash, numbing, shocking and laugh-out-loud hilarious. Its 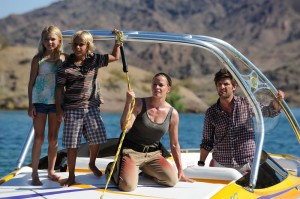 underscoring commentary on films of its type is equally engaging, however hypocritical some of it may be. Though Aja’s consistency as a filmmaker can certainly be put into question, he remains an interesting figure in the contemporary horror scene. It will be interesting if after this venture if he will return to his more independent roots or continue to produce deceptively mainstream Hollywood horrors.