The identity of the man who killed Bruce Wayne’s parents is revealed on “This Ball of Mud and Meanness,” which serves as a character defining moment for Bruce when he is brought face to face with his pending revenge. Gotham has been hinting at the possibility of Bruce facing his parent’s murderer for some time, and his energy has been mainly focused on avenging them by committing murder himself. But as shown in this episode, revenge isn’t always a satisfying venture.

The course of the season seemed to be headed towards Bruce getting in touch with his dark side, and for his Hero’s Journey to remain true, he needs to be tested and set on a new path of discovery. The balance of walking the righteous path and the one of corruption is a consistent theme for Gotham and continues here with Bruce staying the course, while we’ve seen in previous episode how the city could and attempts to corrupt him. What “This Ball of Mud and Meanness” does well is present the different ways a corrupted person can come back from the dark and back into the light again. Here we have Bruce, a person who is pure, being tempted by the dark side of vengeance, believing it to be justice, but learns it’s not satisfying because doing something morally wrong as a response to something morally wrong doesn’t make it right. Instead, he decides to combat evils by better understanding how the corrupting system works and trying to figure out how to cure it. One of the best aspects of this episode is Bruce discovering the side of Gotham City he has seen very little of, the world that Cat has been living in her whole life. From the Mutants’ lair where they meet a man named “Cupcake,” to the punk nightclub where Jeri dwells with a group of Jerome worshipers, these are the avenues of Gotham where the corruption creates the cesspool of villainy that make the city so reviled.

See also  Gotham, Ep. 1.12, “What The Little Bird Told Him” is charged with shocks & chilling development

Meanwhile, there is another turn towards the righteous path presented in The Penguin’s rehabilitation by the hand of Professor Strange. Strange has designed a program that will condition The Penguin to be non-violent and perhaps coax him into becoming a contributing member to society. Strange’s methods to cure him, by torturing him with virtual dreams that will teach him about remorse, are fittingly horrifying. These sequences are somewhat reminiscent of A Clockwork Orange and its ideas of ironic rehabilitation treatments, and whether it is humane to treat violent people to such conditioning. The end result is somewhat surprising, as The Penguin appears to have successfully passed the program and has been granted a certificate of Sanity and his freedom. Professor Strange has deeper plans for The Penguin, certainly, as he mentions to his assistant Ms. Peabody that he is part of a bigger picture that he would rather not reveal to her. As far as a big bad goes, Professor Strange is a mystery  worth the time he’ll take to unravel, and is one aspect to look forward to each week.

“This Ball of Mud and Meanness” is another landmark episode in the Bruce chronicle towards becoming Batman, delivering a story that is both revealing of Bruce’s character and a smart trajectory for his journey. The story is well-integrated with other developing plots. all of which seem to be building with remarkable momentum. 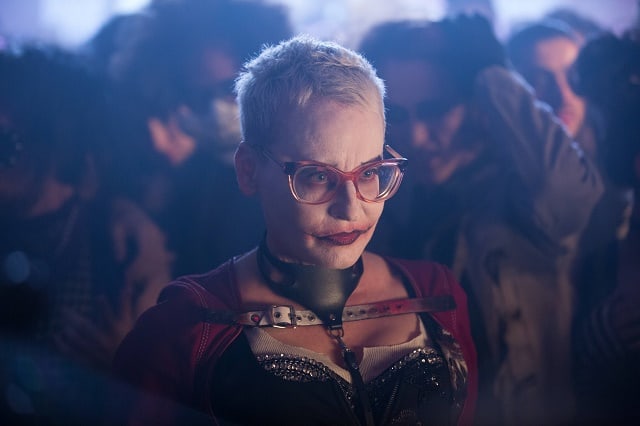 There has been some development with Ed Nygma coming to the forefront of late. With his recent display of repressed anger towards Bullock in “Mr. Freeze”, and his newfound self-imposed conflict with Gordon, it appears that Nygma will be clashing with Gordon sooner rather than later, which is promising. Nygma has displayed misplaced paranoia before, but in the past he also suffered from impulsive riddle-making when he would get nervous, which has not been entirely followed up with, except for when Nygma squeezed out a riddle while he was questioned by Gordon about Kristen Kringle. The fact that Kristen Kringle’s whereabouts are still being questioned is interesting to learn, as it appears that the revelation of the truth may be something of a ticking time bomb for Nygma. This new wrinkle that Nygma is now actively out to get Gordon is sure to deliver some curious development that may result in Nygma’s exposure. As it is, Cory Michael Smith continues to present Nygma’s paranoia and increasing menace with an entertaining demeanor that makes him fun to watch.

The reveal that the details of Professor Strange’s larger plans are being held secret from his assistant Ms. Peabody is noteworthy, as it gives new insight into their relationship and how invested Ms. Peabody is in Professor Strange’s ultimate goals. The skirmish they have about letting The Penguin go free is particularly interesting, as Ms. Peabody is against it despite believing the rehabilitation program does work. She appears to have a sense of moral responsibility for her patients while Professor Strange is more interested in seeing how experiments turn out or figuring out how to manipulate his patients to do his twisted bidding. It is also fun to see the different layers of Professor Strange as he presents himself to his patients and how he acts away from them, such as when he is alone coldly tape recording his analysis of The Penguin at the end of ‘Mr. Freeze‘ to his frank conversation with Ms. Peabody on his larger plans for the Penguin. Both of these characters are interesting and fun and BD Wong and Tanya Pinkins are bringing them to life splendidly.

Bruce encounters some compelling characters during his investigation of Matches Malone, including the formidable Jeri (played delightfully by Lori Petty), whom he meets at the night club. Jeri is particularly interesting because of the club scene that she’s a part of, which includes a punk band that model their style after Jerome’s Maniax! gang. Gotham has done well to establish Jerome’s influence on Gotham City in “The Last Laugh,” and continues to feed into that mythology with hints of his legacy shown on graffiti walls and now here at the night club where we find Gothamites dressed in Maniax! apparel and displaying images of Jerome as a kind of legendary figure. Jeri herself appears to show her embrace of Jerome’s chaos philosophy, given her talk with Bruce about playing God (which may be emblematic of the Joker influence) and the creepy clown make-up intended to look like she had scarred the side of her mouth to force a smile, reminiscent of Heath Ledger’s take on the Joker in The Dark Knight. Gotham is building to something here and it’s always fascinating to see how they continue to explore the Joker spirit on this series. 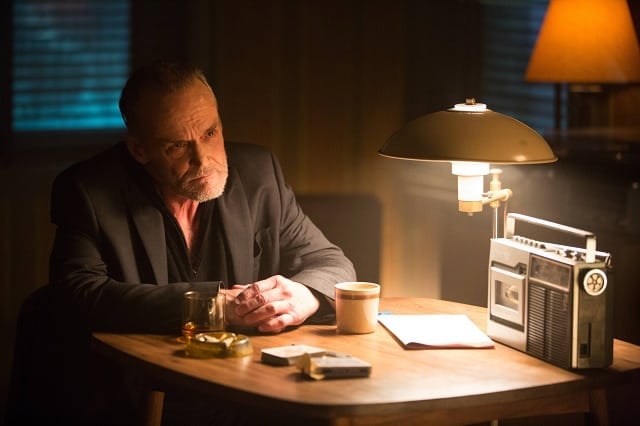 Doing the investigating this week is not Gordon or the GCPD, but Bruce Wayne himself, in uncovering the whereabouts of the man who pulled the trigger on his parents: Matches Malone. The investigation begins with one goal in mind and that is to kill Malone with of a gun he acquired from Cat. Showing Bruce with a gun is a powerful image, considering how much of the source material has characterized Batman as someone who loathes guns, due to their part in his parents’ murder. The Bruce of Gotham hasn’t obtained that scorn for that weaponry yet, though Bruce does hesitate to use it. Bruce is very timid when handling the gun, especially as he tries to maintain his honest philosophy while threatening people with it. When trying to learn of Malone’s location from his contact Jeri, he informs rather than threatens that he has a gun, which she taunts him to put to use. Jeri is more interested in corrupting Bruce than in her own life, which falls in line with the Joker philosophy. Though Bruce isn’t the type of person that would kill anyone, his anger is pushing him to believe that he could. This is made clear by David Mazouz’s excellent performance, which is heavy with emotion.

The showdown with him and Malone has Bruce discover that his parent’s murderer is just a man and not the monster that he imagined him to be, a beat that hits home very strongly as it is a very significant moment in the series. The reaction on Mazouz’s face sells how disappointed he is that Malone doesn’t even remember murdering his parents and how unsatisfying killing Malone would be for him, because he would be losing a part of himself while Malone gets the death that he knows has been a long time coming. That isn’t Justice, it’s just something that will pull him into Gotham City’s corruption wheel. Much like the lesson that Bruce learns in Christopher Nolan’s Batman Begins, Gotham’s Bruce learns that it wasn’t this man that killed his parents, but the corrupt system that was a breeding ground for this type of killer. Michael Bowen portrays Malone as a truly gritty, beaten-down soul, one that has seen enough horrors and done enough of them himself that he has reached the end of his tether and just may be ready to cash in on all of his sins on Earth, so he can finally rest in peace.

Malone’s suicide saves Bruce from crossing that line and gives some closure to his parent’s murder for the time being. Although there are no current indications of who hired Malone to commit the murders, that particular whodunit can wait, especially while Bruce takes on his exciting new venture discovering the shadier side of Gotham with his tour guide Cat, which is sure to be fun.

This episode is credited to writer Jordan Harper, whose previous contributions have been “The Anvil or The Hammer” and “Scarification”. Harper tends to be assigned to the younger-character focused episodes, as this Bruce heavy episode mostly deals with his moral dilemma. John Behring’s direction does well in bringing Harper’s script to life by drawing fine performances from the cast and staging some great set-pieces and strong sequences such as Alfred’s fight with Cupcake and Bruce’s talks with both Jeri and Malone. The encounter between Malone and Bruce is beautifully staged and paced, helping to make the scene as effective as it is.