On January 15, a teaser for 10 Cloverfield Lane played in front of 13 Hours: The Secret Soldiers of Benghazi. Like Michael Bay’s latest slice of explosion pie, the idea of another J.J. Abrams production felt like old hat. We’d been down Bad Robot’s road one too many times already. In the early days, there was the “Lost Experience”; later, Abrams would try to curtail Star Trek fans from rejecting his action-first, guy-fi reboots by flip-flopping on character reveals. Cloverfield was the epitome of the hype machine, with a cryptic teaser, interactive marketing campaign, and rumor mongering on iMDb and Wiki pages. Like with all of Abrams’ “mystery boxes,” the hype for Cloverfield was real, and disappointment in its found footage alien attack would vary depending on whether you coughed up for midnight tickets.

Eight years later, 10 Cloverfield Lane‘s relationship to its predecessor seemed dubious by design, and the expected litany of questions followed: What is this? Is the ARG tie-in worth losing sleep over? Did someone cut Greg Grunberg a paycheck? The difference is time. It’s no longer 2008. Space fantasies notwithstanding, the anticipation of JJ Abrams productions had become the events themselves, where the run-up to the product was more exciting than finding out if we had a Khan Noonien Singh or a John Harrison waiting for us. 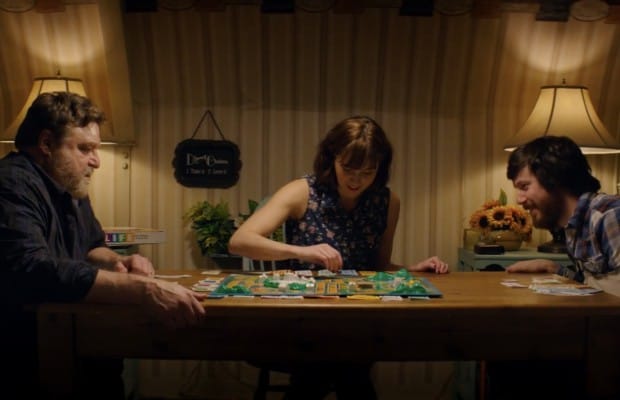 10 Cloverfield Lane is good. On face value, Abrams has little to do with that, with a small stable of dextrous actors, Y: The Last Man would-be director Dan Trachtenberg and composer Bear McCreary. Selecting McCreary for scoring duties shouldn’t come as a shock. As with Trachtenberg’s Portal: No Escape, McCreary shot to message board stardom with his revolutionary work on Battlestar Galactica, which gained him a fan in Trachtenberg along with countless countless others. Since then, McCreary’s been the best part of numerous television projects, from Marvel’s Agents of S.H.I.E.L.D. to The Walking Dead.

Given his TV track record (and that The Boy and The Forest are terrible), this marks McCreary’s first major studio effort. He begins in noteworthy fashion, providing a glissando of a main motive for Mary Elizabeth Winstead’s Michelle with a squeaky yaylı tambur. In the bunker of John Goodman’s gruff, probably crazy survivalist, Michelle will go through the ringer. McCreary is telling us this is her story with confidence and grace; at the very least, we can stop panicking at the Paramount logo.

But things do get tense, and white-knuckled sequences are amplified in cues like “Hazmat Suit.” McCreary doesn’t have to prove himself, despite his ambitious orchestration. A metric ton of cellos and improvised percussion in barrels and broken cinderblocks standout on paper, but like Michelle’s DIY survivalism, these foreign elements are melded into a slick tapestry.

Despite admitted influences in Elmer Bernstein and Jerry Goldsmith, “The Burn” and “Valencia” bring with them the classical braggadocio of John Williams. Garnishes of woodwinds call to mind Raiders of the Lost Ark, opening up the claustrophobic setting with an adventurous spirit, essential given where Michelle’s story goes. Despite the dark stuff, there’s plenty of pure, Spielberg-inspired awe, but is that any surprise from a producer behind a two-hour love letter to E.T.?

15 years after Alias, the J.J. Abrams hype machine still sputters, but its gears are rusty. It’s been replaced by a slicker means of production: substance. The fallout of Cloverfield‘s invasion is beside the point. Immersive, shaky cam is no match for characterization and music that feeds off of audience enthusiasm. By doing what he does best, Bear McCreary has broken a streak of intrigue and diminishing returns. 10 Cloverfield Lane is exciting and for once, we don’t need a trailer to tell us that.