Gotham returns from its Winter break by reanimating one of Batman’s coldest villains, Mr. Freeze, in order to raise the bar of misdeeds that Gotham criminals are capable of. The season began with the subheading of Rise of the Villains and opens up the second half of the season with a new one: Wrath of the Villains, establishing that the super-powered villains are now here and ready to discharge their wrath onto the city; they’ll have to do so at a glacial pace, though, considering that the spring premiere spends most of its time setting things up for much more interesting villainous escapades to come.

The main concern of “Mr. Freeze” is not so much the titular character, but reminding the audience of the midseason finale’s events and also establishing Gordon’s reinstatement back into the GCPD. This episode could serve as a jumping-on point if needed, because it spends so much time bringing the audience up to date on things that Gotham viewers already know concerning Gordon’s court hearing that restate his involvement in Galavan’s murder and his lies on the subject. Within the hour, Gordon gets cleared of any wrongdoing, regains the trust of Captain Barnes, and gets back on his detective beat all without fully addressing the outcome of Gordon’s marriage proposal to Lee or explaining why he would go back to work at the GCPD when he has a baby on the way. Gordon is driven by the job, and that could be enough to dissuade this line of questioning but if Gotham isn’t interested in answering them too deeply, it really should be, considering how Gordon is actively lying about things he’s done to both his superiors and Lee. Surely there’s story to be mined from the fallout of their learning the truth about Gordon.

The Penguin narrative is a bit thinner, as his entire arc entails his being on the run for the murder of Galavan and getting caught by the police only, to be sent off to Arkham Asylum for “rehabilitation.” All of this feels very rushed to get Penguin to be under the thumb of Gotham’s other new villain, Professor Hugo Strange (not to be confused with the Benedict Cumberbatch Marvel Cinematic Universe character of similar name). The Professor’s inclusion in this season appears to have the most promise of escalating the momentum of the season with his experiments to give superpowers to his criminal test subjects. The story is on the precipice of great movement especially as the news of Mr. Freeze’s scientific innovative discovery on the reanimation process will surely advance the prowess of his experiments.

While “Mr. Freeze” takes a great deal of time setting up this new arc rather than thoughtfully exploring the title character’s predicament, it’s still able able to quickly establish Mr. Freeze’s situation, present his motivation, and display the extent of his powers to a satisfying degree. If this episode feels a little cold, it’s probably because there is just that much ground to cover and characters to give their due, but there is enough signs that this second half of the season is just starting to warm up. 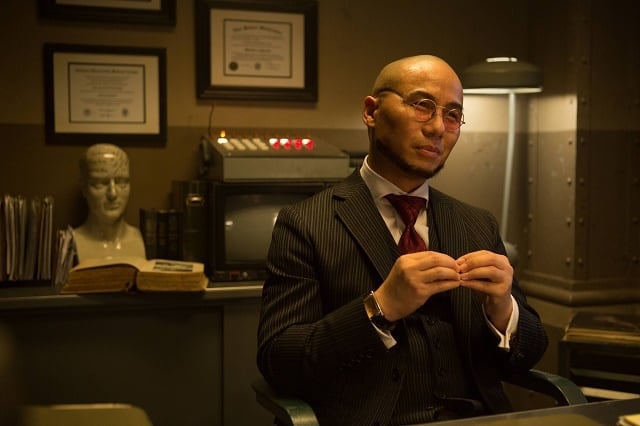 One of Batman’s more notable non-super-powered villains from the source material, Professor Hugo Strange, is brought to live action television for the first time here and is already an interesting addition to the cast. Hugo Strange is portrayed by BD Wong, whose hand gestures and gentle, deliberate tone come off as a mix of mystery and mild menace when talking to his patients, such as in the scene where he talks to the Penguin about “treatments” and “rehabilitation.” There are certainly more layers to be uncovered regarding his true motivations, as he is the one behind Indian Hill experiments and his “rehabilitation treatments” turn out some horrific results. Case in point: Nigel, who scooped out both of his eyeballs to the mantra given to him by Hugo Strange: “See no evil. Do no Evil.” Things do not dbode well for The Penguin’s own rehabilitation at Arkham Asylum.

Although The Penguin’s arc does seem a bit rushed just to get him to Arkham Asylum and with Hugo Strange, the short beats that got him there are effective. The Penguin has been through a lot, and it makes sense that he would be floundering around unsure what to do with himself after having gotten his revenge on Galavan for killing his mother. It seems more likely for him to decide he want his crown back from Butch to rule Gotham again rather than to have him succumb to imprisonment. Perhaps Gotham would get there at some point but they seem more inclined to have Penguin be the audience surrogate to explore Arkham Asylum, which is a smart choice and a worthy venture.

It appears that after Penguin’s fall from being King of Gotham, the duties of the position fall on its Gangland Goon, Butch, who has taken to it with a weighty glumness. Butch is a malleable villain that seems better when taking orders rather than giving them. He’s often been under the control of the influence of another and his greatest quality is his loyalty. Now given his freedom, he appears to be in the market for a helping hand and here to answer that call is Tabitha. The return of Tabitha brings up some questions, such as: where is her ward Silver? And if she despised Gotham City so much in previous episodes, why decide to take residence there now? The answer to these could be resolved later or can be simply that she genuinely likes Butch and wants to partner with him because she knows she can control him. Either way, Tabitha seems to be better paired with Butch here and seeing their partnership bloom will surely be fun to see. 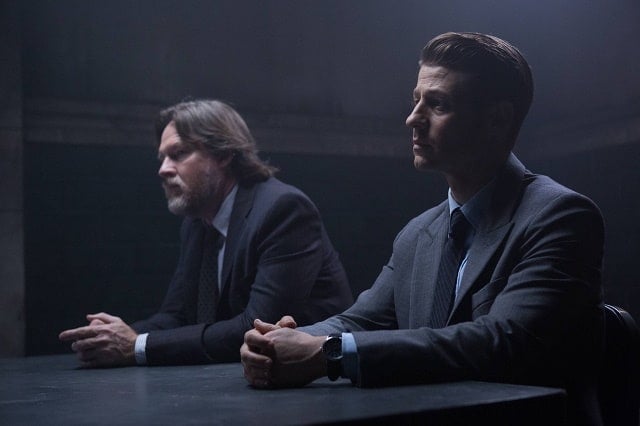 Gordon’s first assignment back after the Galavan debacle is a weird one. They find a beat cop frozen to death which, it must be said, is pretty reckless on the part of the villain. As clumsy as that is,  it does serve Gordon and Bullock as far as getting them on board with investigating the case goes. What little time we spend with Mr. Freeze does what most would expect from the storyline, taking the tragic story of the character trying to find a cure from his ailing wife and presents it fairly generically, save for the odd choice of really accentuating the goriness and agony of her illness. (If she’s under such great duress, why keep her alive at all?) The single pill that he gives her seems to solve the problem, but it doesn’t seem logical that it would help her recover from the fit that we have just seen her experience, though it at least makes clear that Mr. Freeze’s obsession to save his wife is his ultimate motivator, as she appears to be at the near end of her life.

The experimentation that Mr. Freeze embarks on also follows the general pattern one could expect from this storyline, as his first attempt fails to hold water and melts before him, and then when all seems lost and he’s about to turn himself in, he discovers that his last experiment was, in fact, a success. While the beats feel predictable, the sequences are utterly worthwhile as the special effects and other visual elements are top-notch, including Mr. Freeze’s frankly very cool costume. Nathan Darrow plays Mr. Freeze, and fine work in his scenes with with wife Nora (Kristen Hager), but more time needs to be given to them for them to display any real chemistry.

Writing the entry episode of a new arc can sometimes be an unrewarding job, because all you are assigned to do is table set for more exciting things to come, and for the most part “Mr. Freeze” does that well. It’s only fair that Ken Woodruff would be tasked to do this here, as his last episode, “Knock, Knock” had so much strong material to work with and was one of the best episodes of Gotham to air last year. Woodruff is efficient with the writing here, giving each storyline enough attention without ever being tedious. Working again with Woodruff is returning director Nick Copus, who worked on the Scarecrow two-parter. Copus is excellent at finding distinctive ways to establish space and distance in scenes. There’s an amazing, circling shot of a person being pelted with the ice gun that really communicates the chilling magnitude of being frozen alive; moreover, the contrast of lighting and inky darks are often well utilized on Gotham, and this episode is no different.

As fun as the Galavan arc was, there is no telling to what new heights the show can reach now with Indian Hill activated, and here’s looking forward to finding out.