The last couple of episodes have been building up to a showdown between Gordon and Nygma, and on this week’s Gotham they deliver a satisfying conclusion to the frame up of Gordon arc, as well as introduce more threads that will be coming into play as the season begins to wind up into its end.

In the last few episodes Gordon has lost so much at the hands of Nygma, but mostly he’s been paying for his own sins of deceit for having crossed the line by killing Galavan. Gordon is forced to look at himself as he faces off against Nygma, who shines a light at the actions of a psychopath. Gordon has been going down the darker path due to his time in Gotham City and was taken to task for it. There is something inherent in Gordon that brings him to fight, but the question that Gotham poses is, Should Gordon take it upon himself to clean up the city?

There is a very interesting scene where Gordon is walking past a robbery in process and he decides to intervene by fending off the criminals, but ends up frightening the victim and then getting caught by a law enforcer. This entire sequence begs the question, if Gordon had not engaged in fighting the criminals, wouldn’t they have been stopped by the police officer anyway? Gordon appears to have lost his faith in the law system and therefore feels that he needs to act outside of it, in order to effect change in the city. But with this mentality he ends up fighting both the law and the criminals instead. Gotham is showing that Gordon needs to be believe in the system again and have presented a way for him to regain that faith and that is by him keeping the promise he made to Bruce in the pilot. Finding who killed the Waynes and bring them to justice. Although, Gordon is not yet fully redeemed from his actions but now that he has cleared his name, he may be well on his way as he now has a mission that he needs to complete before he can find his home again with Lee. 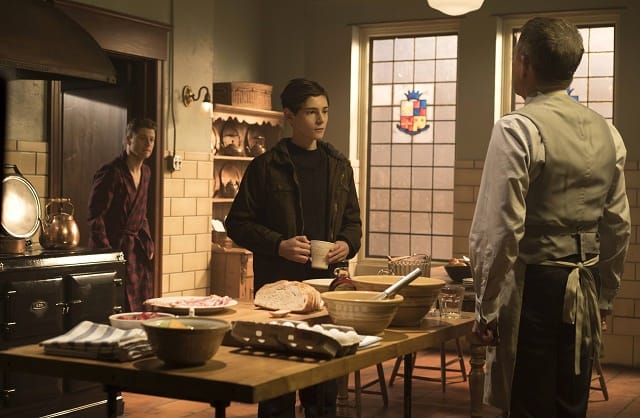 The Penguin’s arc has had him rehabilitated by Professor Strange and then sent off to fend for himself in a world where he is neutered with no place to call home. As this is Gotham, it was only a matter of time before he made his way back to his evil ways and it turns out that his time with his step-family has him cured alright. Although the arc had Paul Reubens as the Penguin’s father, the time spent with him felt almost too short, which makes it the more relieving that Penguin is back to his old self by episodes end. It’s interesting to see how in the Penguin’s background he had come from wealth and high society, which may be subconsciously what fueled his need for power. He had been demoted from his position of wealth to that of servitude again by his step-family, which is an interesting return for the character, also considering how his mother was also a servant. Perhaps the most interesting thing about this arc in the episode is how The Penguin regains his ability to murder. It’s been said that a sociopath can be detected if at a young age they are able to kill animals without remorse and that is on display here as The Penguin poisons the dog and then to show he has regained his homicidal freedom he laughs without remorse. This brings The Penguin back to kill his step-family and delivers some darkly funny moments with Penguin presenting Grace Van Dahl a roast of her dead children. The sequence is wonderfully performed by Robin Lord Taylor and Melinda Clarke, who does a great job looking horrified.

One of the things that I was hoping to see was more of Bruce and Cat on the streets of Gotham and learning lessons on the way. As it turns out all we’ll get is just the one episode with Sonny Gilzen beating up Bruce, as this episode closes off that arc. The opening of this episode did do a good job at showing what their dynamic was, with Bruce throwing money off the side of the building while Cat is upset with him about it. Unfortunately for Cat, Bruce is presented with the discovery that Luscious Fox had fixed the secret Wayne Computer and has to make a choice whether or not to let Cat in on his mission. Alfred explains to Bruce that what they may embark upon will be dangerous and that if he should not include Cat as to protect her from what they will find. Typically, Bruce is smarter than this and would understand that Cat is beyond capable for what dangers may lie ahead but the contrivance of Gotham needs them to have a rift and so this is it. Although, it is not ideal to keep Cat out of the team, this does bring more dilemma for Bruce and it will be cool to see where the Wayne computer thread will lead.

We’ve had to wait an episode before seeing Barbara Gordon after she awoke from her coma sleep and now we learn that she seems to be not crazy now. This turn of events is interesting in that now that Gordon and Lee are now separated and the question of Gordon’s child with Lee has been extinguished this leaves it open for Gordon and Barbara to return to the course of what is expected of their characters in the Batman mythology. The question is: Do we want them to get back together? The show knows that Gordon is better with Lee, but this may be another way to drag out his journey before he gets back to her. We’ll have to wait and see the results of Barbara’s return at Gordon’s door. 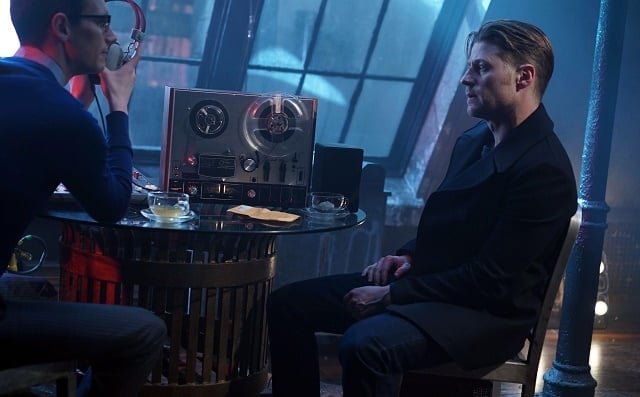 The case file for the past couple of episodes have essentially been about clearing Gordon’s name and now that the team of Gordon and Bullock are together, there is real headway given to their progress. Their investigative conversation serves well to give a fair exposition to their mission that led them to their mission of retrieving the tape with the voice of the person who is framing Gordon. There’s some fun early on with Bullock distracting his Internal Affair contact (with a excellently funny performance by Donal Logue) while Gordon breaks into the offices, but the investigation reaches its highest point when Gordon turns to Nygma to help him encrypt the tape.

This entire sequence is outstanding as they show Gordon unaware that he has just walked into the dragon’s lair of his framer. The arc has been building to this and it is great how Gotham handles the tension in the scene as well as the point of reveal. Cory Michael Smith does excellent work in his portrayal of Nygma in this sequence as he presents his subtle menace with his poses and knowing tone in his voice. Smith’s delivery of the line “Guess what? I knew that you knew that I knew” is powerful and is perfectly followed by the shock of seeing Gordon get electrified by a current setup in Gordon’s chair. Those who were wondering when Nygma was going to get the chance to play into his villainous role are getting it here and then some.

Although seeing Nygma get the upper hand on Gordon is a highlight of the episode, it is not the end we want for Gordon. The episode concludes with Nygma’s downfall after revealing to Gordon that he killed Kristen Kringle, something Gotham had setup to see how long Nygma would get away with it. The final sequence with Nygma and Gordon talking it out is excellent with Smith’s continually grandiose performance against Ben McKenzie’s more subtle but equally powerful and expressive facial acting.

The episode is written by Rebecca Perry Cutter, whose last entry was the darkly fun “By Fire” which featured the murder of Kristen Kringle. It makes sense that the writer’s room would assign Cutter this script to handle as that was a significant episode in the evolution of Nygma and this episode addresses and closes off many of the threads that had begun there. “Into the Woods” is darkly fun, with fun dialogue and subtle black comical moments that are elevated with excellently executed performances. Oz Scott directs this episode with great skill that pays close attention to the retrograde aesthetics of Gotham. Along with the well-staged sequences of Nygma and Gordons confrontation, the gritty realism in how Gordon being shot in the leg is presented, there is an interesting and sharply shot effect in the Nygma mirror scene that is particularly visually compelling.

See also  'We Are Robin' #6 proves Robins are for kids