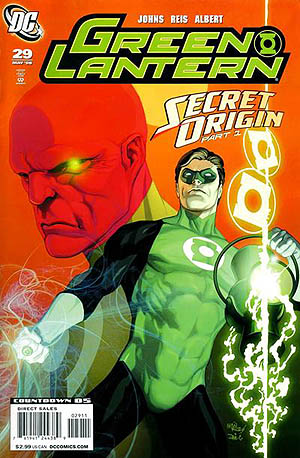 Despite beginning in issue #29, Green Lantern: Secret Origin serves as the perfect jumping-on point for readers interested in what Geoff Johns has to offer.  This is the story that made me love Green Lantern because of how accessible it was, while at the same time, furthering the overall plot that Johns had been brewing over the past few years.  It’s a smart retelling of Hal Jordan’s origin, yet it’s sprinkled with new features that shed further light on Johns future plans.  It’s in Secret Origin that the real cause of Abin Sur’s demise is revealed and how it ties into the creation of the Red Lanterns.  Readers also get a glimpse of the blossoming friendship between Sinestro and Hal Jordan that is more like an older brother-young brother relationship that the teacher-student bond displayed in Emerald Dawn II.  But most importantly, what distinguishes Secret Origins is just how much heart the story has.

Geoff Johns was born to write Green Lantern; although he’s had major success with other titles, Green Lantern will always be his magnum opus.  Being told as a flashback, Secret Origin is naturally a sentimental story, a fact that only heightens its success.  Despite his failures as a son and a brother, readers see the impact that Sinestro has on the fledgling Green Lantern in becoming a better man by helping him to let go of the anger that plagued him for his entire adult life.  Readers are also introduced to a Carol Ferris who’s much less sure of herself, but one who still sacrifices personal happiness for others around her.

Even Atrocitus, the villain of Secret Origin is able to be sympathized with because of Johns’ masterful storytelling.  One of five survivors of a genocide perpetuated by The Manhunters, Atrocitus sees the Guardians of the Universe, and by extension, the Green Lantern Corps as terrorists, responsible for the death of trillions of beings.  He is a being of rage, but he’s not the reckless monster that he appears to be.  His rage is righteous indignation; his hatred is understandable, and his vengeance is justifiable.  In essence, Atrocitus is what Hal Jordan would have been, had he never let go of the anger festering within him after his father’s death.

The Hal Jordan presented in Secret Origin is also much different then the present Hal Jordan.  During his early days as a Green Lantern, Jordan was brash, way more reckless, and dismissive of the Green Lantern Corps.  It’s only when comparing the Hal Jordan in Secret Origin to the Hal Jordan during the rest of Johns’ run that the similarities between Sinestro and Jordan make themselves evident.  Once Hal Jordan expels Parallax and rejoins the GLC, he becomes a much more by-the-book Green Lantern, but still retains his “individualist thinker” attitude.  Right after Blackest Night, Jordan becomes as obsessed with his duties as a Green Lantern as Sinestro once was.   The brashness that he exudes as a rookie is later replaced by a loyal skepticism towards the Guardians, paralleling the relationship that Sinestro once had with them.  Despite facing off as opponents, Geoff Johns shows that because of their similarities, Sinestro and Hal Jordan could never actually be enemies.

It’s Sinestro who becomes the most intriguing character in Secret Origin because the story sheds more light on his days as a Green Lantern, than ever before.  Whereas Jordan became more refined during his years as a Green Lantern, Sinestro became more obsessed, more absolute, over the years.  His need for order and security eventual led to him enslaving his own planet, just as his belief in fear supplanted his belief that willpower could breed obedience and lawfulness.  He became more extreme in his pursuit of law and order; yet in Secret Origin, Johns’ introduces a more understanding and compassionate Sinestro than readers were accustomed to. 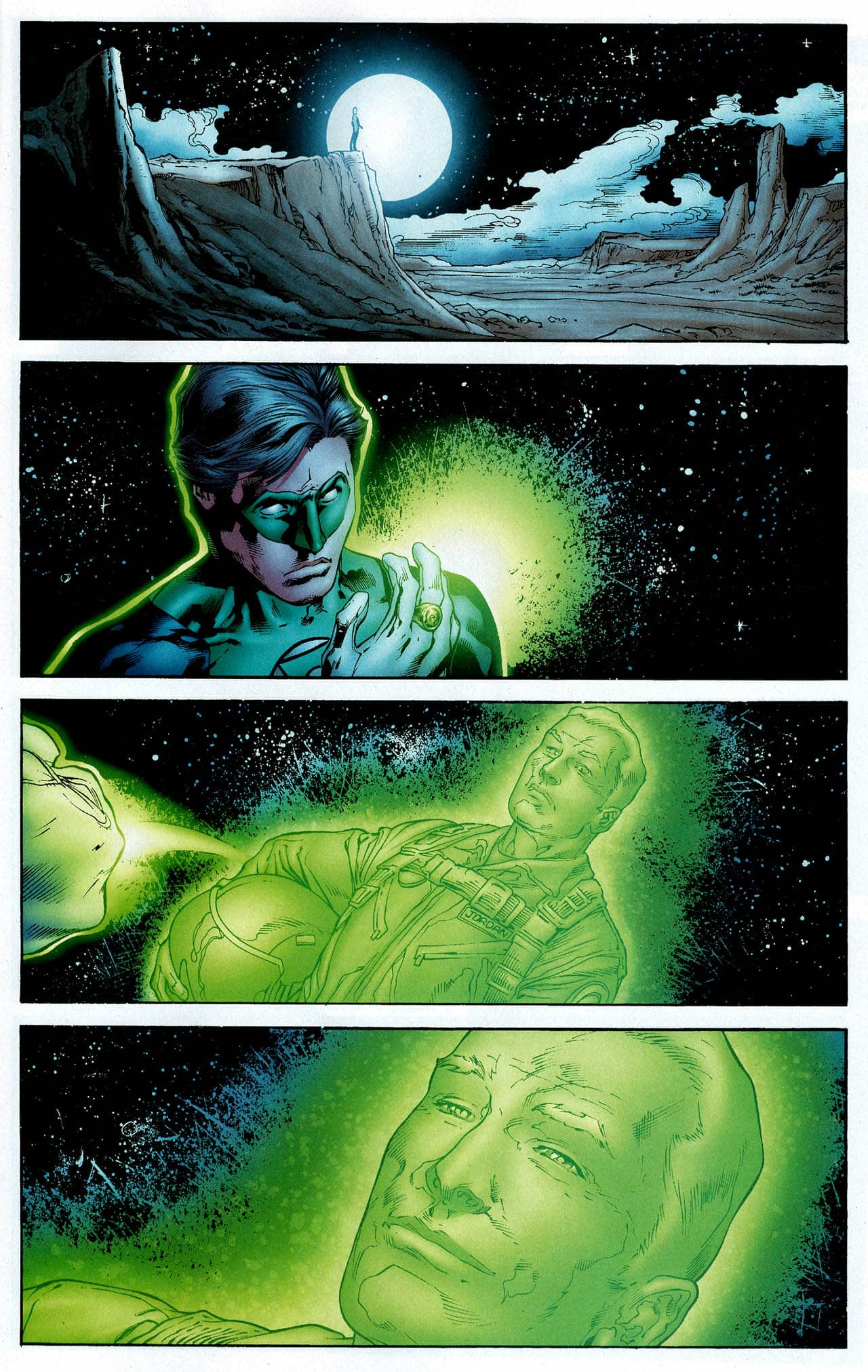 Despite his mentoring of Hal Jordan and his friendship with Abin Sur, Sinestro still possesses the same arrogance and egotism that would eventually lead to his own demise.  He is referred to and later introduces himself as “The Greatest Green Lantern”, a title that no doubt leads him to believe he is infallible.  He also seems to be beyond the Guardians reproach as he lays his neck on the line for Hal Jordan when they both go up against the Guardians for breaking protocol.  It’s in these ways and more that Johns’, whether intentionally or not, makes Sinestro analogous to Lucifer in Paradise Lost.  Both were once the most favored until they became victims of their own arrogance who constantly blame others for their eventual fall from grace.  In order to get back at their superiors, both characters then decide to tarnish the reputation of the new favorite.  For Lucifer it involved tempting Adam and Eve; for Sinestro it involved turning Hal Jordan against the Green Lanterns by exposing him to Parallax.  Any time Geoff Johns’ writes Sinestro, there’s a classical element that no other writer is able to imbue in the character.  Secret Origin is just the finest example of Johns’ unparalleled ability to write Sinestro.

What’s even more powerful about Secret Origin are all the tidbits and minor revelations that it offers.  It takes the Alan Moore classic “Tygers” and greatly expands on it by further explaining the history of The Five Inversions, illustrating the full impact they had on the demise of Abin Sur, and even features artwork from the story.  Beyond this, Secret Origin is all about self-fulfilling prophecies, as multiple characters facilitate their own demise.  Hal Jordan’s mother is so overcome with fear for her son’s safety that she worries herself to death.  In trying to kill William Hand before he brings about the Blackest Night, Atrocitus helps to transform him into the Black Hand.  Abin Sur relies too much on the prophecies of The Five Inversions, which leads directly to his death.  Even Sinestro is not immune to the machinations of fate as it is implied the seeds of his fall from grace are sown by Atrocitus who tells him of Korugar’s impending doom.  Did this action lead to Sinestro tightening his grip on Korugar to prevent Atrocitus’ prophecy, or did Atrocitus merely lie to Sinestro to goad him into becoming a tyrant?  This ambiguity hangs over readers wondering how culpable Atrocitus was in Sinestro’s downfall.

Hal Jordan’s origin story is simple enough that it never needed an update or retelling.  But because Geoff Johns had something new to add to it, he necessitated a corollary to Jordan’s origin.  He tethered the story he was telling to the very fiber of the Green Lantern mythos.  The secrets of the future were now buried in Jordan’s past.  Not only did the past hold the key to the future of the Green Lantern Corps, readers also saw how the past influenced the future.  In a roundabout way, Sinestro was responsible for Hal Jordan being able to save Kyle Rayner from the clutches of Parallax.  Despite being long dead, Abin Sur’s massive role in the War of Light was first hinted at in Secret Origin.  Readers also see that Hector Hammond’s jealousy towards Jordan has been brewing since they first met and that Ganthet has long been acting on Hal Jordan’s behest.  Not only does Secret Origin lay the ground work for future stories, but it also fills in the blanks to previous stories, thus retroactively making them fuller and much more interconnecting.

Geoff Johns’ run on Green Lantern produced the seminal take on Green Lantern.  Johns took a struggling and insipid franchise and turned it into a consistent top seller.  He made Green Lantern matter again by crafting an entire universe based solely on the power of emotions.  His run never lacked heart, as the biggest theme was the complex relationship of Hal Jordan and Sinestro.  This was never more evident than in Secret Origin one of the most compelling and insightful stories ever conceived by the legendary Geoff Johns.