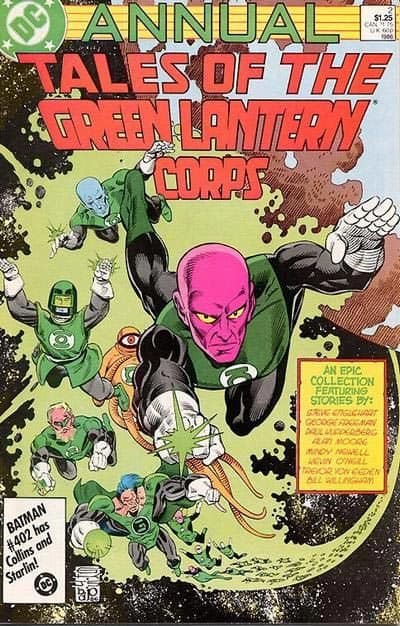 No matter what title he writes, Alan Moore manages to leave an indelible mark on any comic book fortunate enough to be penned by his hand.  Whether it be ongoing series like Swamp Thing and Miracleman, or condensed stories like The Killing Joke and “Whatever Happened to the Man of Tomorrow”, his influence is still felt by these franchises some 30 years later.  What makes Moore such a seminal figure in comics is not only the stories themselves, but the inspiration these stories trigger in subsequent creators.  Moore created the definitive Swamp Thing, and he produced the greatest Joker story ever told, a story that inspired the animated TV show of the 90s, the original Tim Burton Batman movie, and The Dark Knight, as well as countless other retellings.

However, it was one of Moore’s shortest stories that proved to be one of his most impactful works.  Being just 12 pages long, “Tygers”, found in the pages of Tales of the Green Lantern Corps. Annual #2, depicts the inciting action for Abin Sur’s eventual demise.  It is a terrifyingly haunting portrayal of Abin’s descent into a hellish world rife with disturbingly dreadful demons and torturous landscapes.  If you combined The Twilight Zone, Star Trek, and Dante’s Inferno, you’d get “Tygers”.  For all intents and purposes, Alan Moore somehow crafted a horror story from a Green Lantern comic book.  As it stands, the results have never been more grotesquely enjoyable.

See also  Steven Soderbergh Month: 'Solaris' is the director at his most sentimental

Being only 12 pages in length, the main plot is actually pretty rudimentary inasmuch as Abin Sur, predecessor to Hal Jordan, is looking for the lone survivor of a spaceship crash.  While pursuing the child, he runs into an ancient, yet all-but-forgotten foe of the Guardians of the Universe.  However, this is where a layer of psychology depth is added to the story, in a way that only Alan Moore can infuse into a comic.  Instead of his destruction however, these enemies, The Five Inversions, the last remnants of the fabled Empire of Tears, seek Abin Sur’s ruination.  They don’t want to defeat him or kill him, they would rather fill him with self-doubt and and beset him on the path to his own self-destruction. 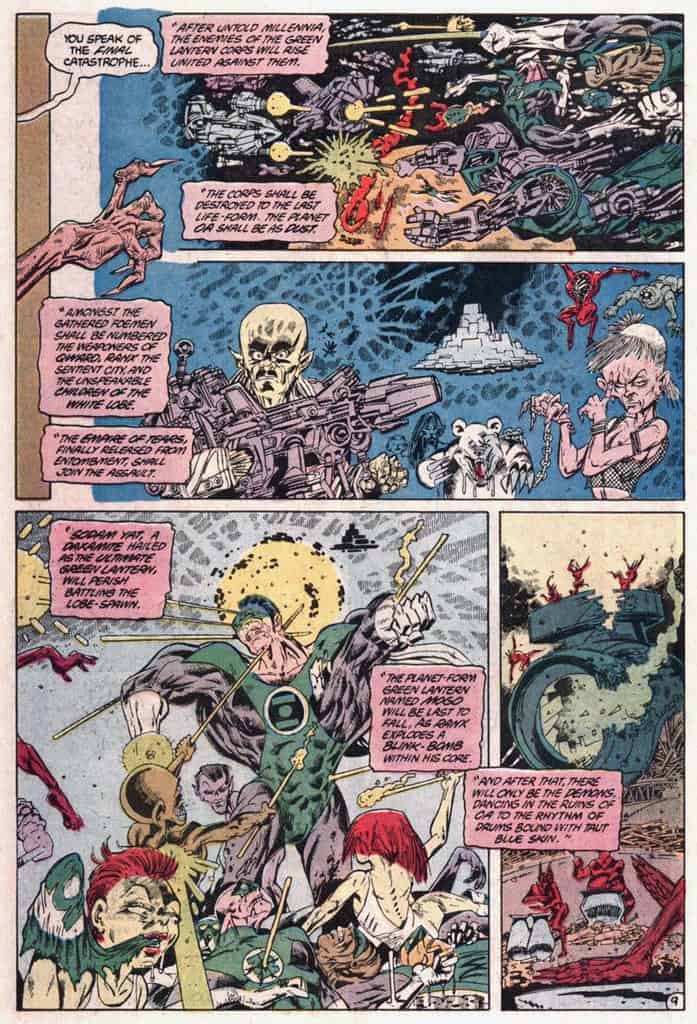 Qull’s prophecy serves as the basis for The Sinestro Corp War.

The mark of a great comic book writer lays in their ability to masterfully characterize the villains who antagonize our heroes.  For such a writer as Alan Moore, who perfectly rendered Ozymandias, Joker, and Kid Miracleman, it should come as no surprise then that the real star of “Tygers” is Qull of The Five Inversions, the being who acts as the architect of Abin Sur’s demise.  Like some sinister genie who spikes the wishes of his master with malice, Qull offers Abin Sur the chance to ask any three questions of him.  Despite offering his assistance in locating the missing child, Qull, who his crucified along with his companions on the forbidden planet Ysmault, soon turns his agenda to planting the seeds of self-doubt in Abin Sur’s mind.  Although in Qull’s defense, he does only speak the truth when asked a question; it’s just that Abin Sur asks him innately morbid questions, like what’s the greatest upcoming catastrophe that the Green Lantern Corps will ever face.  “Tygers” is something else entirely as it’s concern isn’t with humans, or aliens, or even monsters for that matter; “Tygers” is a tale about evil.  Qull of The Five Inversions is the evil that festers in the crevices of self-doubt; he is the evil that leeches of sorrow and deception; he is the evil that thrives off the agony of good men.

Being a master of subterfuge and manipulation, Qull offers the truth, but one colored the yellow shade of fear in order to make his prophecy of Abin Sur’s demise a self-fulfilling one.  For all of his willpower, Sur feigns disbelief at Qull’s prophecies, but beneath his confident and dismissive demeanor, readers are shown just how shaken Abin has become because of Qull’s machinations.  Moore enlightens readers as to the real reason why Abin Sur was traveling in a spaceship when Hal Jordan first ran into him, and the short answer is Qull.  In fact, these demons were so pleased with themselves for sowing so much fear within Abin Sur, that once he left their midst they were fraught with laughter for 19 weeks straight.  Subtle nuances like this are what makes “Tygers” such a haunting yet delicious read.  Despite knowing how the tale of Abin Sur ends, readers are treated to a front row seat to watch the spectacular beginning of Abin Sur’s end.

Artist Kevin O’Neill’s skills are perfectly suited to draw the hellish Ysmault and the distorted demons of The Five Inversions.  Ysmault is rendered more akin to one of Dante’s circles of Hell than to an alien planet.  The best way to describe O’Neill’s pencils are as apocalyptic, since his chaotic and warped style conveys a very inhumane and destructive atmosphere.  This makes O’Neill the perfect candidate to draw both the apocalyptic Ysmault, and the prophecy of cosmic revelation.  Qull, a twisted demon, is drawn exactly as such, Ysmault is the Hell on Earth that Moore originally intended, and Qull’s final prophecy is as horrifying to readers as it is to Abin Sur. 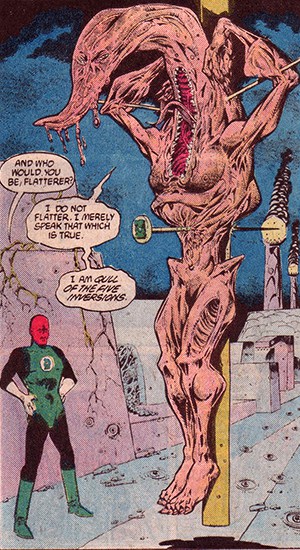 One of the most grotesque, yet intriguing characters Alan Moore ever created, Qull is the architect of Abin Sur’s destruction.

Despite simply being a great read in a negligible issue of a throwaway series, “Tygers”, served as the foundation for Geoff Johns’ immaculate run on Green Lantern.  The final catastrophe prophesized by Qull served as the basis for The Sinestro Corps. Wars, Sodam Yat, a character first mentioned in “Tygers” made his next appearance 20 years later in conjunction with The Sinestro Corps. War, and Atrocitus, the creator of the Red Lanterns, was actually one of The Five Inversions along with Qull, despite not being shown in “Tygers”.  The singular root of Johns’ run is “Tygers”, proving just how influential Alan Moore could make a 12-page story.  What could have very easily been considered just a filler story in a nonessential issue of a second tier title, instead became the basis for the greatest run in Green Lantern history.  The fact that “Tygers” was able to do this is a testament to Moore’s skill as a writer and how he can connect to his readers and inspire other creators by infusing a new literary genre (in this case horror) into a preexisting continuity with a mere short story.  For anyone who has enjoyed Green Lantern over the past 11 years, the genesis of their joy lays in the horrific fate of Abin Sur, courtesy of the one and only, Alan Moore.