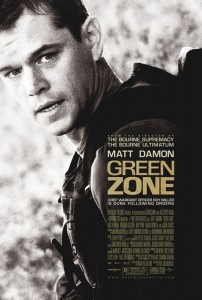 “an adequate addition to the Iraq War films sub-genre, but unfortunately not a particularly memorable one”

The combat film has a tradition in American cinema almost as storied as the Western. Like many genres of the time, the war film transformed in the 1970’s to compensate for the negative attitude the majority of American people felt towards the conflict in Vietnam. No longer was it acceptable to glamorize the violent acts of soldiers (as had been done in the past), but rather filmmakers began dealing more with the ramifications of the war than the war itself. The current conflict in Iraq has shared a similar impact on filmic culture; one major difference being that filmmakers began analyzing the war’s effects even as it was being fought. Due to the cynicism the American people experienced in the 1960’s and 1970’s towards the Vietnam War and the impeachment of President Richard Nixon, US citizens began questioning motives in military activity. As a result, Liberal minded Americans have been quick to question every war since. Perhaps no conflict has come under more scrutiny than the present military presence in Iraq; a war that’s motivations seemed skewed from the start. Because of this, it has become a near impossibility to make a film that glorifies it’s existence. Kathryn Bigelow’s recent Oscar winner The Hurt Locker has been praised for it’s lack of partisanship, but in reality, simply by showing realistic violence on screen the film presents an interpretation of a war that has negatively impacted the lives of countless people worldwide. The very idea of attempting to romanticize the fighting in Iraq would come off as pastiche to a modern, media literate audience. Paul Greengrass’ Green Zone seems to be the next step in the evolution of the war film. An action movie with anti-war leanings set during the early years of the Iraq war. The message is quite obviously leaning to the left, yet the film’s first ambition is to entertain. Some might find this to be trivializing the conflict; in reality it’s simply the next logical progression in a genre trying to stay relevant. Green Zone fits into an odd niche in the lexicon of popular culture. The film has a political edge, but its aesthetic and plot structure are similar to those of an action film. In addition to this it stars Matt Damon, himself an actor known for straddling the line between Hollywood blockbuster and small indie film.

“We have made a genuine attempt to make a mainstream action thriller set in the real (Iraq) world. And that’s what makes it really different … it’s a big movie,” Damon told Reuters. The idea is certainly an intriguing one and perhaps it is this objective that ultimately makes Green Zone something of a disappointment. It’s not to say that the film is bad, but given its ambitions, it’s not very memorable.

Paul Greengrass has dealt with the United States’ involvement in the Middle East before, albeit in a different context. The first Hollywood film to dramatize the events of September 11th, 2001, United 93 was a success both commercially and critically. The film’s significance even led to a Best Director nomination for Greengrass at the 2006 Academy Awards. United 93 was a film that presented its story without having an overt political agenda. After all it was the first film to narratively deal with the terrorist attacks of 9/11 and because of this, Greengrass truly had to walk a fine line. Green Zone is obviously a very different cinematic experience.

Inspired by Imperial Life in the Emerald City by Rajiv Chandrasekaran, Green Zone tells the story of Roy Miller (Damon), a warrant officer posted in Baghdad. Upset with the lack of reliability in the intelligence regarding locations of WMD’s, Miller takes matters into his own hands and begins that classic of Hollywood motivations: a search for the truth. Oddly enough, for such a complex war, the characters’ intentions are quite black and white (at least on the American side). Greg Kinnear plays Clark Poundstone, a Pentagon Intelligence officer and essentially the film’s villain. He is a slimy character whose motivations are so skewed that he comes off as something of a parody. Of course, one could view Poundstone as a representation of the United States Government; hiding the dark truths behind the motivation for America’s involvement in Iraq with the idea of sacrificing one’s morals for the “greater good”. Contrastly, one could analyze Damon’s Miller as a representation of the American public, suddenly wary of a war seemingly motivated by greed and intent on seeking the truth. Miller continues to walk down a path that he knows will lead to the loss of his faith in the American Dream, yet his commitment to his country forces him to do so. Ultimately, Miller has more violent encounters with American soldiers than Iraqis which seems to be a comment about the opposing ideals facing the American people on the homefront.

Greengrass’ portrayal of Baghdad is one of the more interesting and accomplished aspects of Green Zone. The only idea most people in the Western World have of what the Capital city looked like during the invasion comes from photographs and video footage from various media outlets. Greengrass’ Baghdad, certainly feels authentic both in its representation of a society crumbling on the fringes of war and in its demonstration of the Americanization of a foreign culture. We see iconic landmarks such as the Hands of Victory Arches and As-Salam Palace (Saddam Husein’s former residence), surrounded by US troops, a testament to a conquered civilization. One of Greengrass’ better demonstrations of the American impact on Baghdad comes when Miller and his troops stop by As-Salam Palace and come across a group of Americans partaking in a pool party. The stark contrast between what the ground troops in Iraq experience in comparison to what the high brass, American organizational forces experience is never more startling. Several of the party-goers are drinking beer and eating pizza, American comfort transplanted to the Middle East. Whether this is accurate as to the real situation in Baghdad or not is tough to say, but it certainly gets the point across. In addition, Greengrass presents the Americanization of Baghdad, throughout the film, whether it be through the constant appearance of the US flag or through simple scenes such as a soldier watching a college basketball game on television.

A lot of critics have referred to Green Zone as a Bourne film set in Iraq. There certainly are similarities, but to refer to it as such, dismisses some of the film’s redeeming qualities. Thematic analysis aside, an action film lives and dies by its thrills and Green Zone’s begin to fall flat near the end. A climax featuring Miller being chased for what seems like twenty minutes is both unnecessary and somewhat boring. Like many cineastes, I am a fan of the work of Paul Greengrass. His use of gritty, hand-held camera work and quick violent montage lends itself perfectly to the action genre. At points, however it seems that he gets lost as to whether he wants to be a director of simple entertainment or of political films. Green Zone is a perfect example of this confusion, but certainly not without its redeeming qualities. It’s an adequate addition to the Iraq War films sub-genre, but unfortunately not a particularly memorable one.