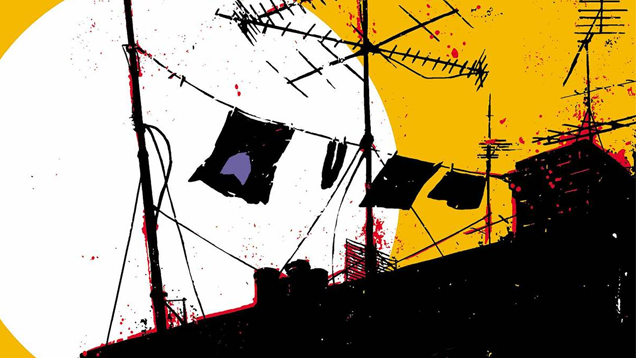 Five months after Clint Barton’s faithful dog Lucky showed up with an arrow in his mouth in Hawkeye #21, Hawkeye #22 is finally out and ties up the series’ arc in a violent, emotional bow. (Pun fully intended.) Storytellers Matt Fraction and David Aja bring back both Hawkeyes  and show how much Kate Bishop has progressed as a character throughout series, and how much Clint hasn’t progressed in the best of ways. Like last issue, Hawkeye #22 is mainly action, but artists Aja and Hollingsworth raise the stakes with a variety of artistic tricks, including Aja’s trademark multi-panel grids, making Chris Eliopoulos’ lettering look like panels Will Eisner or Frank Miller style, and the use of silhouettes.

Aja’s vivisection of the comics page in Hawkeye #22 makes for smooth, coherent reading and  his bigger panels that much more meaningful, like when Kate Bishop comes rolling into town sporting a Russian t-shirt, some badass sunglasses, and  destruction in her wake. Aja has a knack for symmetry, but not in a formalist way like in Watchmen #5. For example, there’s the page where Kate returns to Bed-Stuy with Lucky, a page between of Tracksuit Vampire chattering, and another page where Kate is walking in the same pose and panel size with yellow and black coloring instead. The symmetry reveals that she is definitely a more competent hero than Clint. Fraction and Aja also like  object to object transitions using things like guns and bows to accentuate the danger in each moment and keep the comic fresh. The gun also represents the temptation for Kate and Clint to just mow down their enemies, who have been seemingly (and literally in publication time) annoying them for years , instead of doing the right thing. 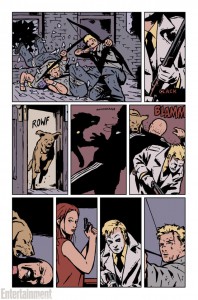 heart of this issue, and he really brings Clint and Kate back together as friends and equals after their arguments early in the series and three time zone separation more recently. His early injury (after being the MVP of the fight against the Tracksuit Vampires) really gets them to bring the anger John Wick style as a wounded Clint starts to beat the crap out of the Clown, who has been his mysterious nemesis throughout the series. Aja uses flurries of panels to show the desperation in Clint’s punches, and Hollingsworth cuts to black each time a climactic moment happens. The three creators make this final battle the opposite of a third act Marvel Cinematic Universe slugfest as these incredibly mortal characters scrap tooth and nail for primal things, like survival and family, not the end of the world or multiverse. (Sorry, Secret Wars.)

Hawkeye #22 is the end punctuation on a series, which made both Kate Bishop and Clint Barton equals for the name Hawkeye from the get-go as well as being the vanguard of superhero stories that aren’t afraid to be adventurous artistically. Its scope is pretty small, but Fraction’s distinctive dialogue and Aja’s masterful panel transitions and rough hewn cartooning have turned into a fan favorite title. And Hawkeye #22 is a feast for the fans as the residents of Clint’s tenement take a stand against their ridiculous invaders, and the series ends on a quiet, yet colorful archery scene that cements Clint and Kate as the true heroes of the people. It does have one dangling thread that would have made for a great continuation of Fraction and Aja’s storyline, but it looks like All-New Hawkeye won’t go in this direction.

Hawkeye #22 manages to be the action movie of the summer (thanks to David Aja’s layouts and Hollingsworth’s punchy colors) while also rounding off the series’ emotional arc. Prepare to cheer, laugh, cry, and fall in love with Clint and Kate all over again as Matt Fraction and (hopefully not) David Aja take their final bows in the Marvel Universe. Hawkeye is truly the gold standard for regular dude superheroes, and Hawkeye #22 brings this simple theme to an exciting, relatable conclusion.