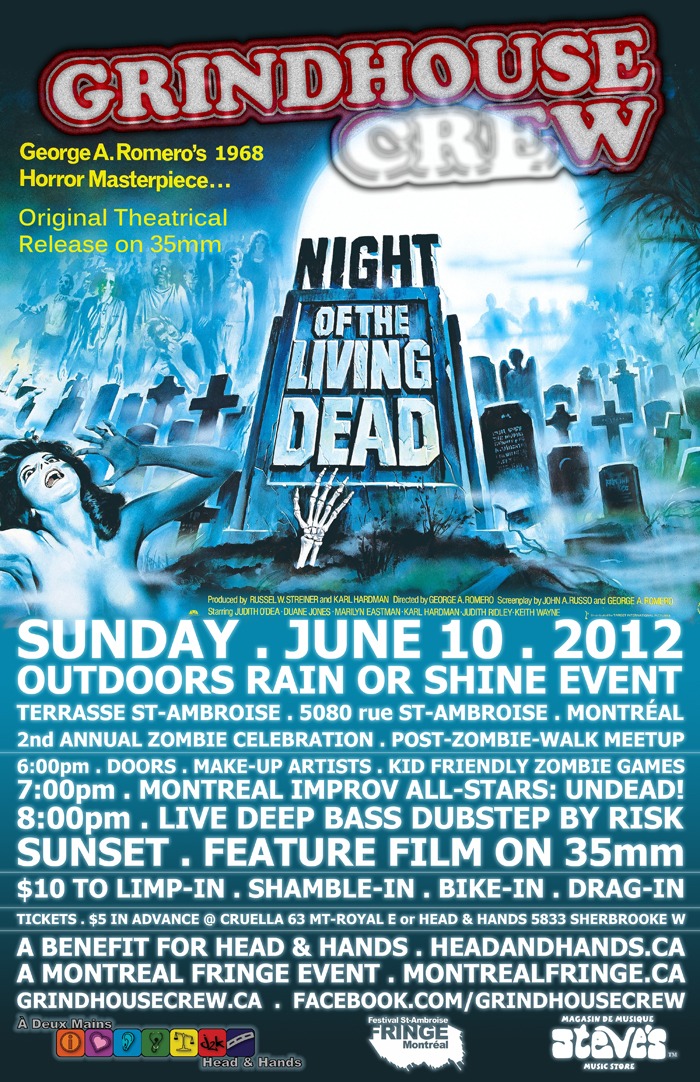 Almost universally panned by critics when released, the film eventually developed a cult following, playing on the midnight movie circuit for more than a decade and becoming one of the most influential horror films since Psycho. The film spawned five sequels, and innumerable remakes and clones. Often imitated, but never duplicated, Night of the Living Dead launched director George A. Romero on the path to become the king of Zombiedom.

More than just a film screening, join the crew by the Lachine canal for the 2nd annual Montreal Fringe event at Terrasse St-Ambroise. Doors open with make-up artists & kid-friendly zombie games at 6pm, a special performance by Montreal’s improv all-stars at 7pm, and a live dubstep performance by Risk at 8pm. Once the sun sets, settle in with a beer and some popcorn for an outdoor screening of the feature film!

LISTEN TO THE INAUGURAL PODCAST FOR OUR SORDID CINEMA SERIES IN WHICH WE DISCUSS THE FILM AND INTERVIEW GEORGE A. ROMERO HIMSELF.

In 1968, director George A. Romero transformed cinematic zombies from a bunch of brain-damaged Haitians working on farms to a cannibalistic apocalyptic plague with Night of the Living Dead. The influential film was also helped solidify horror as a genre which filmmakers could experiment with fantasy as social allegory, draping metaphor in flayed skin and decorative loops of intestine. Following Night of the Living Dead, Romero has re-visited the well of the living dead five times and counting, with Dawn of the Dead, Day of the Dead, Land of the Dead, diary of the Dead, and this year’s Survival of the Dead. In the inaugural podcast from Sound on Sight’s spinoff show, your hosts Ricky D, Detroit Burns, and Al Kratina discuss George A. Romero’s influential zombie series starting with the original trilogy.

This is a fund-raiser for Head & Hands
www.headandhands.ca


Prev Article Next Article
Tags:Night of the Living Dead