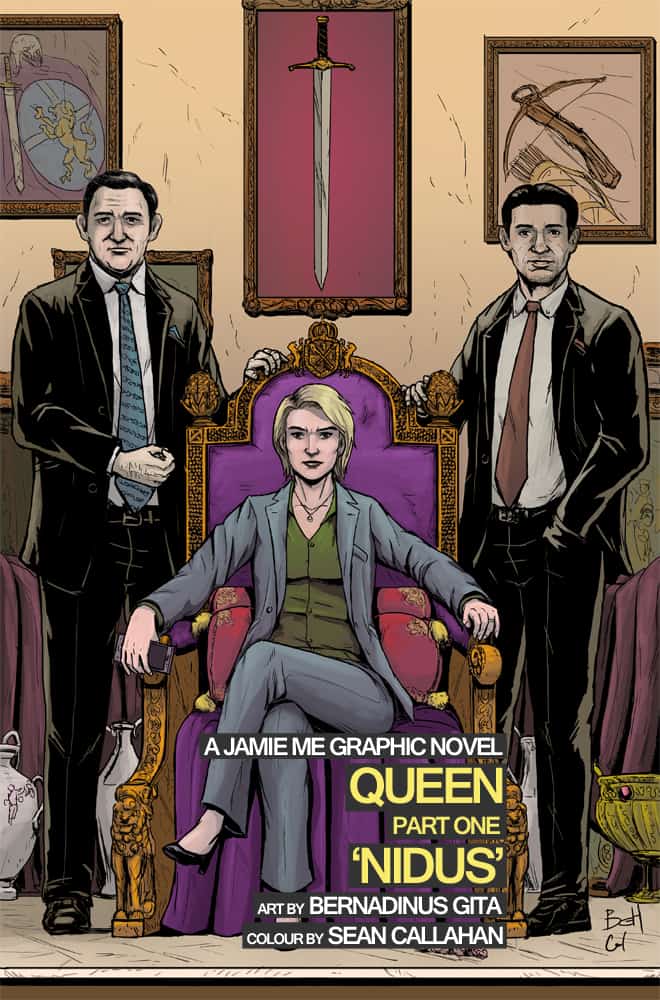 Emily Green is not happy. As the Deputy Prime Minister of England, she suspects that her boss, PM Daniel Camden, is guilty of trying to privatize the National Health Service. The Unity party is ready for a massive lawsuit, and Emily’s head will be on the chopping block. But then Emily receives a mysterious phone call. The caller claims to be part of the clandestine hacker group, Nidus. They want to stop the corrupt Camden and put Emily in charge, but for a horrible cost. Queen is a tense and relevant political thriller that asks the hard question: Do you trust your government?

Welcome, scumbags, to the very first Hive of Scum review! This puppy comes from a couple penny pinchers looking to be all political and thrillery (ie?). I’m gonna let them know what I really think of this trash rag.

The cover is very artistic. The stylized throne, bodyguards, vases on the floor, and paintings above all represent two types of political power: wealth and military. The positioning of Emily surrounded by all these objects suggests her possession of them. She’s got royal balls, a queen you could say. The coloring is somber and fits the thriller aspect of making the reader feel there is a dark secret beneath the surface. I don’t like the bodyguards though. They’re too casual. However, I do like how their hands rest on the throne above Emily. It suggests that they will do whatever she wants: kill, lie, give her a foot massage.  They’re her loyal servants.

Gita is a good artist. His environments and characters are detailed, and Callahan’s coloring fleshes them out to appear more realistic. Although sometimes they look stiff, characters stand out from one another. My favorite example of this is Page 2 in the court scene: 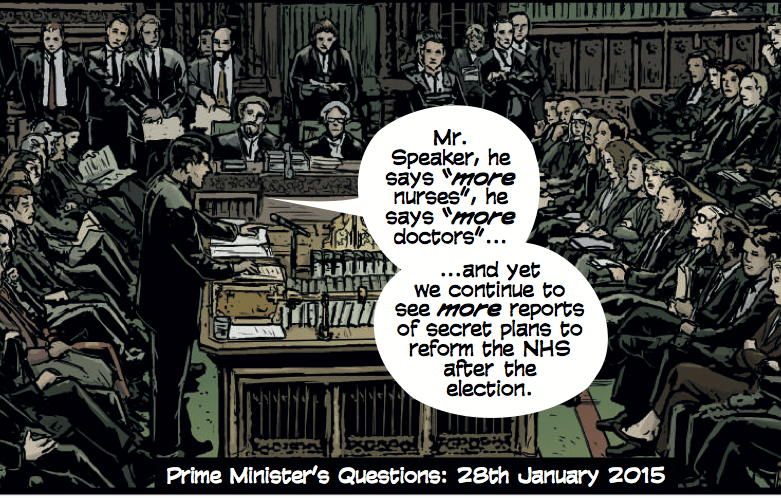 None of the characters meld together in an indistinguishable blob. This is a problem that even professionals have, and they get paid more! Go back to art school, you hacks! Uh, anyway, Gita and Callahan seem to have a good sense of space and give the reader a clear view of the scene.

Another pitfall he manages to avoid is “generic pretty face.” This is when female characters, no matter their age, all have beautiful, flawless features. Gita actually takes time to distinguish them. Emily, for example, is noticeably middle-aged. It doesn’t seem like much, but I can tell the difference between her and a younger woman. I really like how she has an exhausted look. Being a politician is hard. I mean have you seen how Obama has aged into a wizard? Gita shows how the stress affects Emily emotionally and physically, yet she also maintains a sense of personal strength.

Another aspect of the art that I like is panel composition. In sequential art, like comics, the narrative depends on the effectiveness of the transition between images. Most of the time, Gita nails it like a stud. You’re never confused about what is happening nor are there moments where you feel like a transition is random. It flows naturally and logically, like a golden sho………You know what? Never mind.

Sometimes, Gita even takes the opportunity for more artistic uses of panel composition. 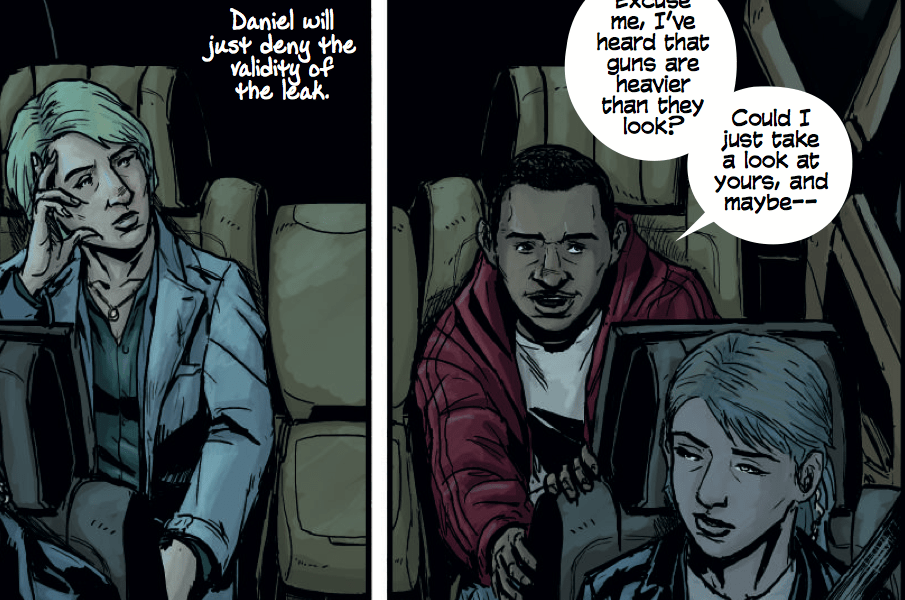 The gutter space between Emily and her son, James, has a lot of meaning to it. Emily is consumed by stress while James is being playful. Emily’s stress has created a barrier that separates their worlds. James tries to crossover to the other side and Emily snaps, but is it because she’s angry or to protect James from knowing her dark secret? It’s a very dramatic moment amplified by this simple yet smart use of panels.

Now, as much as I’ve praised panel composition, it’s got problems. The biggest is the no man’s land of white space that appears. 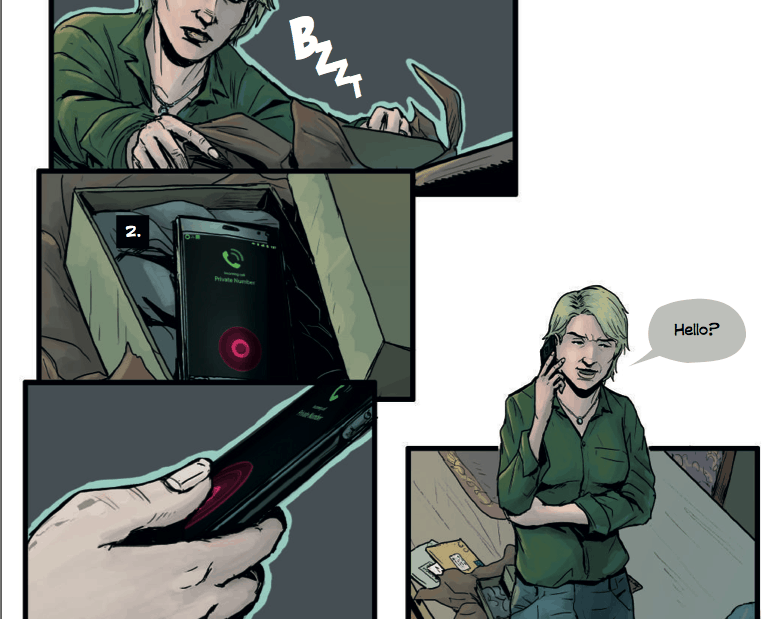 I’m thinking this was meant for dramatic tension, but instead it feels like something is missing. Not to mention it’s distracting. It’s a huge contrast to the dark house Emily is in and takes the reader out of the scene. Personally, I would suggest either bringing the panels closer together or add a few more. You don’t want to look naked (unless you’re a nudist, I suppose).

Jamie Me writes a very engaging political thriller. Most of the issue is story set up, but there are really tense moments. It helps that he keeps the dialogue minimal and has pauses between panels. These help build tension, so that when something important happens, it’s dramatic. A thriller is always best when the scene speaks for itself.

The political aspect is a bit of a mixed bag. On one hand, Jamie is keeping it firmly rooted in modern issues of trust. He expresses a lot of the suspicion many people have now that social media has exposed more shady government activities. Also, Jamie makes sure not to be one sided. The hacker group, NIDUS, is shown to be just as manipulative, if not more so, than the government. People like to think hacker groups are heroes, but looking into their history reveals how unruly and, ironically, fascist they can be toward people they don’t like while endangering innocent bystanders. Gee, they sound like <gasp> government! Jamie maintains this unbiased stance and further complicates the issue of trust by pondering which side is worse.

Unfortunately, some of the political aspects were confusing. The story is based on current English politics, of which I know very little of. I had to do some research, and while I don’t mind, it helps when you explain the more complex elements so readers get an idea of what is going on.

Not many of the characters are interesting, but Emily Green more than makes up for it. From the start, she’s morally complex. She tries to be a dutiful politician while coping with the guilt of the PM’s corruption; she wants to save England while knowing she has made a deal with the devil; all this plus dealing with divorce and being a single parent. She’s fascinating to read. However, I’m disappointed that I didn’t get to see her in action as the Deputy PM. I only know she is because a text caption labeled her as such. I rather see her in action to understand how good she is and why NIDUS would want her as the PM. Perhaps it’s because they think she’s weak-willed and easy to manipulate. It would be a treat to see how she caves into or resists that notion. In upcoming issues, I suggest Jamie demonstrate Emily’s political power. Have her pass a law, bark orders, or declare off with their heads! Emily’s a strong character, so let’s see her in action.

A few other things I noticed were some shading issues with Emily where it wasn’t done and left awkward looking halos around her. Also, some of the lettering was spaced too far apart from characters and needs to be brought closer. Other than, I gotta say Jerky Jamie and Bernardinus did a good job. Queen #1 is a strong, flawed start to an interesting new series. With improved art, more political nuance, and more action from the main character, this could be a breakout for the creative team’s careers. Or not. In that case, I’ll see ya’ll in the alley with a bottle of rotgut.

That’s it for now, scumbags. Join me next time when I’ll be taking a look at Bwilett’s Midnight Menagerie, a comic about a young horror fan and his vampire friend who might just be a little more than his friend.

Donate to the Kickstarter: https://www.kickstarter.com/projects/jamieme/queen-part-one-nidus/description