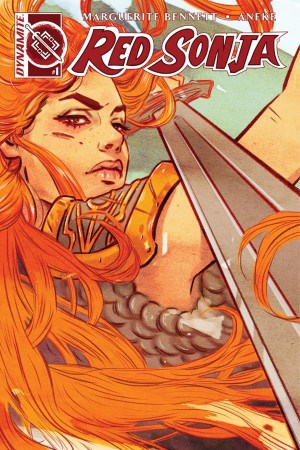 Marguerite Bennett takes over as the writer of Red Sonja after an impressive run by Gail Simone, which included the spectacular Swords of Sorrow crossover and even a team-up with Conan. Sonja’s core personality of loving fighting, brawling, and a good roll in the hay with a beautiful man or woman is intact, but Bennett and artist Aneke put their mark upon the She Devil Sword immediately by changing the environment around her. The aging king of Hyrkania has died, and Red Sonja, who is afraid she would not make a good king because she was spend all day fighting and having a good time, refuses to succeed him as queen and rides off to have her usual adventures. Then, a year later she returns to Hyrkania and finds out it no longer needs saving. Bennett gives Red Sonja a little bit of an existential crisis as she wonders what purpose she has in a world that seems to be bereft of violence, oppression, or just plain adventures. (Seems being the key word.)

Red Sonja #1 has a rich political background narrative that comes to the foreground towards the end of the issue. In the first few pages, the aged king of Hyrkania worries that his fragmented country will be torn apart by invaders from the east and west, and it looks like this is going to be a type of civil war narrative a la the historical War of the Roses or the current fantasy television shows Games of Thrones and Reign. However, Bennett subverts the trope that’s been frankly overused in fantasy stories to tell the story of an empire’s expansion, but not in some “glory of the Roman/British/American Empire” way. In fact, Red Sonja #1 is one big critique of imperialism throughout the ages as it seems throughout history that civilizations from Akkad to the United States of America as countries quell their internal strife to find some kind of prosperity and then go on the warpath to become even more prosperous no matter the cost in lives. Hyrkania no longer has any kind of in-fighting or crime or even monster attacks because of compulsive military service through conscription. Conscription is a technique often used by powerful countries, who want to be more powerful like the Roman Republic, who originally drafted troops to protect the provinces they were station, but then used these troops in wars against Carthage (North Africa), Gaul (France), and various kingdoms in Asia Minor (Turkey).

More recently, the United States instituted a draft of young men beginning during the Civil War to defend the Union from the Confederacy, but over the years, these men were sent abroad to places like Korea and Vietnam to stop the spread of Communism, and this led to many protests. In Red Sonja, Bennett shows both the upsides and downsides of conscription with Hyrkania being a more secure country, but its people lack freedom of choice even if soldiers have benefits for the Hyborian Age, like decent pay and three square meals. It is nice to have some meaty historical and political commentary in what could be a simple straightforward pulp adventure, and the conflict in Red Sonja will come from the fiercely free Red Sonja battling this establishment, which stifles choices and forces young people to be cannon fodder in an endless war that makes the rich richer while keeping the middle and working class in stasis. With the exception of the draft, this sounds like the contemporary United States, but with more swashbuckling, less electricity, and chainmail tanktops as acceptable outerwear.

Aneke’s art for Red Sonja #1 is pretty solid. Some of the faces of the non-Red Sonja characters lack detail, but her backgrounds are lush, vibrant, and immerse the reader into a world that used to be filled with peril and adventure. Her best work comes when things get either sexy or violent. The sexy comes early on as Sonja daydreams for a second about being queen and imagines a kind of bisexual paradise where both beefcake and cheesecake peacefully co-exist. And there’s plenty of wine, beer, and alcoholic refreshments, of course. Bennett and Aneke use future “sexy” dream sequences to not only establish Red Sonja’s queerness without a shadow of the doubt, but to establish her as a sex-positive character, who is interested in a variety of relationships from a quick one night stand with a strong warrior or to be pleasured by the mouth and tongue of a scholarly young woman or take it slow with an artistic young man, who’s good with his hands. Aneke uses different panel layouts for each fantasy sequence from quick, wide panels for the bear-slaying warrior to more intricate ones for the artisan. And Bennett is always there to add the right amount of cheekiness with her dialogue. 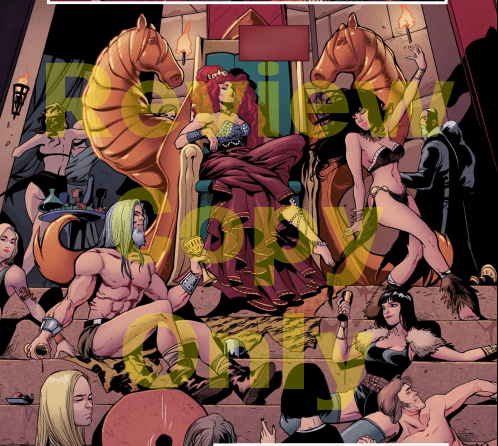 Red Sonja #1 has anything a fan of female fronted sword and sorcery comics could want from political intrigue and commentary to sweeping landscapes from Aneke and colorist Jorge Sutil, who gives Hyrkania the bluest skies and greenest woods as a facade for the corruption that infects this land that seems semi-utopian on the surface. (Namely, random settlers give Red Sonja sass when she offers to protect them for food, drink, and shelter.) And there also plenty of earthy humor and wit in writer Marguerite Bennett’s script, who continues to keep Red Sonja stinky from the moment she pulls the heart out of a bull monster. Bennett also explores Sonja’s approach to romance and relationships  as well as her need to always be fighting or protecting someone and balances it nicely with the political intrigue.

Red Sonja #1 is an exciting and blissful read with pleasures for the conoisseur of sexy men and women, fantasy nerd, art appreciator, and history scholar in you.