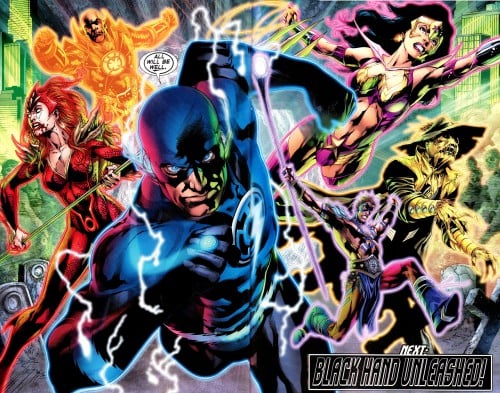 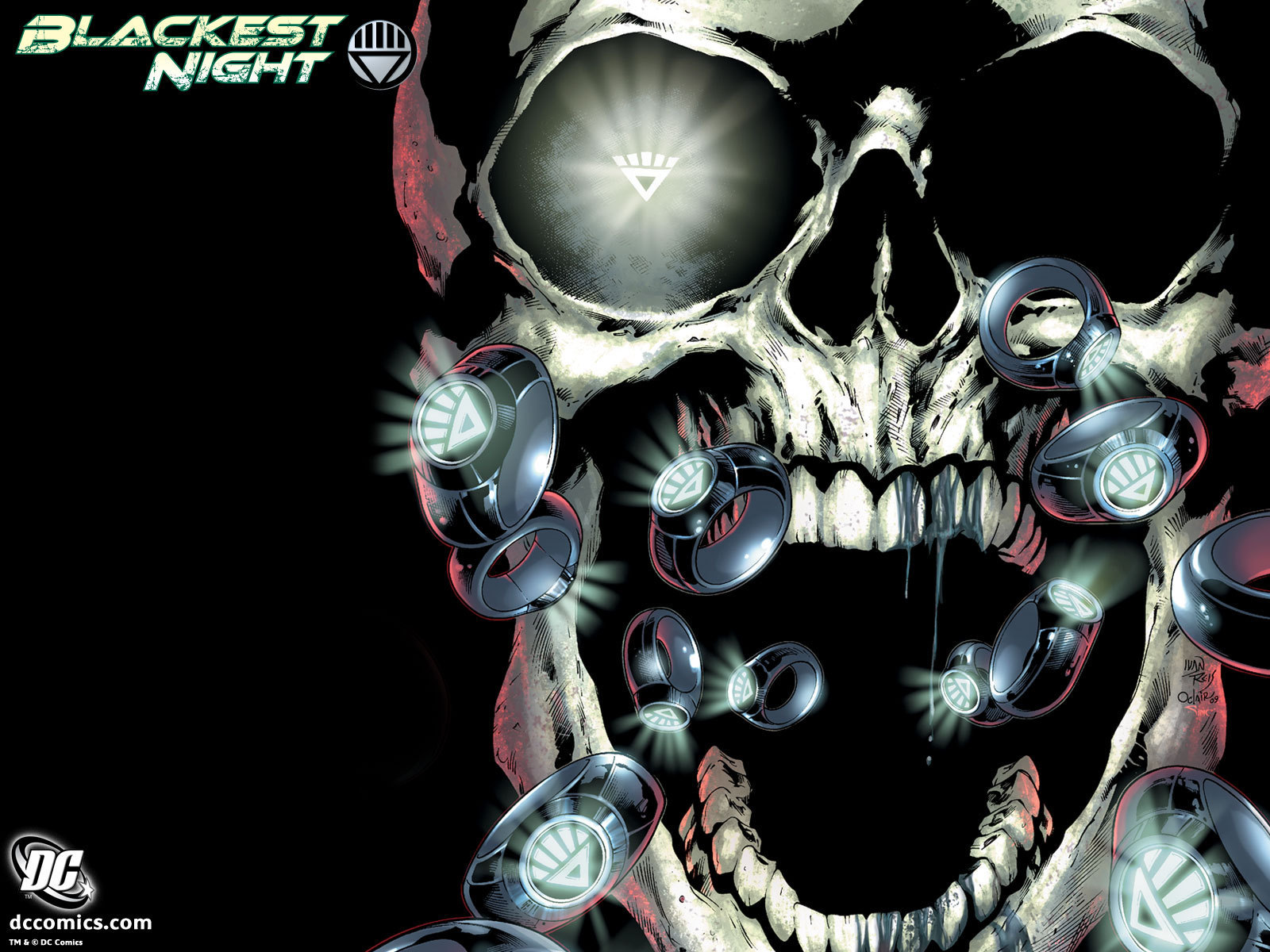 It all started with Alan Moore naturally enough, the comic book equivalent of a cross between Rick Rubin and J.D. Salinger.  Somehow an eight page, pseudo-canonical storyline that not only gave the most perfect explanation for the eventual fall of Abin Sur, but also the most grisly prophecy in all of comics, became the cornerstone for Geoff Johns’ immaculate run on Green Lantern.  Along with Grant Morrison’s Batman, Geoff Johns’ work on Green Lantern was instrumental in restructuring the DCU post Infinite Crisis.  While both runs are seminal and offer the definitive version of each character, what distinguishes Johns’ run on Green Lantern is that he not only brought back Hal Jordan after a decade long absence, he also made the title into one of DC’s heavy hitters.  Batman will sell no matter what because he’s Batman.  Somehow, Geoff Johns resuscitated and then reinvigorated a title that had been inconsequential since the 1970s.

Although Johns wrote Green Lantern from 2006-2013, the climax of his run came in 2009, in the form of DC’s crossover event Blackest Night, arguably the best and most successful DC event.  Blackest Night was originally envisioned as a Green Lantern event only, with the storyline running through the GL books, similar to “The Sinestro Corps War”, but DC decided that the massive storyline would work better as their comic event of the summer, with ramifications impacting the rest of the DCU.  And for once, editorial insight was right. 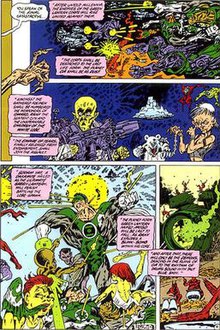 The very first mention of the Blackest Night.

Somehow, despite being borne exclusively from Green Lantern plotlines, Blackest Night succeeds in functioning both as the natural progression of all the seeds Johns had planted in Green Lantern, and more importantly, as a self-contained and inclusive crisis that would necessitate the inclusion of the rest of the DCU.  Because Blackest Night operates on these two levels, the micro GL level, and the macro all-encompassing level affecting the rest of the DCU, it was able to become the best and most enjoyable DC event in recent memory.  It’s possible to read only the main miniseries and have a complete understanding of the plot, crisis, characters, and resolution.  Subsequently, by reading the ancillary titles like Green Lantern and Green Lantern Corps, readers have an augmented reading experience as the peripheral tie-ins are: 1) just as good as the main series (The Green Lantern tie-in issues are arguably better than the main series), and 2) deepen the story by heightening the main crisis, developing characters more fully, and spacing out the event in a way that justifies the existence of the many tie-ins.  Simply put, the peripheral stories feel like they matter without ever feeling necessary.  To understand Blackest Night, readers don’t have to read Green Lantern Corps., but in doing so, gain a fuller understanding of the calamity at hand by further exploring the expanding realm of the Green Lantern franchise.  This isn’t Secret Invasion where all the tie-ins are superfluous and useless; they’re important without ever being esoteric or required reading.

By not reading any of the tie-ins, readers miss out on moments like this. And also Black Hand reaffirming that he is in fact a necrophiliac.

Back in 2009, there was a growing trend in comics (mostly Marvel) where storylines would feature vampires, werewolves or zombies.  Obviously owing a debt to the Twilight movies, and the buzz about the forthcoming Walking Dead TV series, publishers decided that stories about the supernatural were what readers wanted.  It wasn’t, for the most part all those stories failed, both critically and commercially.  Save the werewolves and vampires, for the tweens prepping themselves for a lifetime of Lifetime made-for-TV-movies.  Comic book readers want to read scintillating and organic stories about their favorite characters, not supernatural edicts shoehorned in, diverting the flow of a story already in place.

At worst, Blackest Night was set to be the largest and most epic kind of these flawed stories.  It could have very easily become Green Lantern meets Plan 9 from Outer Space.  Instead, it became an emotionally revealing and high octane event that served as the perfect ending to the first half of Geoff Johns’ run as head architect of the Green Lantern franchise.  The Blackest Night, from which the story gets its name from, is the apocalyptic crisis that will end the Green Lantern Corp. forever.  This prophecy was originally told to Abin Sur on the planet Ysmault, by Qull of the Fiver Inversions in the Alan Moore penned story “Tygers”.  It was during his frequent trips to Ysmault that Abin began to feel the effects of fear, which would ultimately cost him his life.  Although readers were first introduced to the term “Blackest Night”, in 1986, it would be 20 years later when that term would be used again in describing the oncoming “War of Light”.

Since the War of Light and subsequent Blackest Night are all about emotions, Blackest Night evokes plenty of feelings through its eight issues as readers really feel the weight of the character’s emotions.  Watching the original Firestorm kill Gehanna, girlfriend and one-half of the current Firestorm, was unbearable, as was witnessing Damage have his heart torn out by his zombified father.  That was a very whimsical fragment, yes, but it just shows how the emotional impact of Blackest Night makes readers forget that they’re reading a story about zombies.  Readers feel the anxiety, dread, and unawareness that characters like Flash, Atom, and Mera all feel once the crisis began; similarly, readers feel the sense of hope that arises once the heads of the various lantern corps deputize familiar characters like Lex Luthor, Wonder Woman, and Mera in an attempt to turn the tide of the battle.  Geoff Johns is a master at conveying feelings and making his readers reflect the emotions of the characters that he writes, and in Blackest Night, this rare skill is in full effect.

Is that a scythe or are you just happy to see me? Wait. Oh dear God! It is a scyt…

As it should, the main series focuses on the DCU as a whole, and the effect that the Blackest Night is having on those heroes, characters who have no idea of what is truly going on, a great mechanism for slowly unveiling both the conflict and the underlying reason for the conflict.  Green Lantern deals with Hal Jordan’s attempt to round up the heads of the remaining six corps. to combat Nekron, the DCU equivalent of death, and the instigator of the Blackest Night.  While Blackest Night features the main fight and crisis, the issues of Green Lantern that tie into Blackest Night further explore the dynamics between the heads of the seven corps., all of whom have previous history with each other.  These interactions alone are enough to justify reading those issues in conjunction to the main series as these characters, who are supposedly ruled by the singular emotion that the represent, prove to be some of the most multi-faceted and fully fleshed out characters that Geoff Johns has ever written.  Atrocitus is revealed to be a force of righteous indignation, and not blind fury; Larfleeze despises and fears the orange light of avarice that he wields, and Indio-1 is looking for redemption for her mysterious past.

Despite its great individual success, Blackest Night is still an event comic that, by necessity focuses more on events and actions than on character developments.  While it does do a great job of immersing an unsuspecting DCU into a fight against a GL based threat, the miniseries is augmented and accentuated by the character driven narrative of Green Lantern.  Because it’s so large, and devotes itself to representing the entire DCU, a job that it miraculously succeeds at, many of the more memorable spectacles, like the deputation of certain characters into the lantern corps, Sinestro’s tenure as the first White Lantern, and the Flash’s battle with Martian Manhunter are all further examined in other series.

Even with its enormous scope, Blackest Night manages to successfully manage the large cast of characters that it focuses on.  In an attempt to marry the rest of the DCU with the GL universe, Johns makes characters like Mera, Atom, and the Flash just as integral to the story as Hal Jordan, Carol Ferris, Black Hand.  By doing this, Johns effectively uses the crisis of the dead rising as a bridge to link the DCU and the GL universe he created to authenticate the Blackest Night as an omnipresent and magnificent threat.

The creation of the Deputy Lanterns was one of the coolest moments in the past 15 years in comics.

Drawn by the incredible Ivan Reis, Blackest Night is a beautifully rendered comic.  Impossibly enough, Reis ups the ante from his already stunning work on Green Lantern, as he perfectly captures the seemingly endless horde of Black Lanterns.  Instead of looking like generic zombies, each Black Lantern that rises looks and feels as distinct as if they were still alive.  As an artist, Reis knows better than to over exaggerate the look of the Black Lanterns; it’d be too easy to make them look like extras in “Thriller” music video, but because they’re more subdued and look like rotting corpses instead of brittle zombies that are literally falling apart the Black Lanterns are more terrifying and imposing.  Enough can’t be said about the coloring done by Alex Sinclair.  Sinclair’s colors wondrously capture the drab and lifeless tone of the miniseries, yet perfectly contrasts it against the bright array of colors from the other lantern corps.  Having the color contrast of the Green, Red, Blue, Indigo, etc… Lanterns against the gray and black backgrounds really makes Reis’ artwork come alive and pop right out of the page.  The best example of this is when Nekron disembowels a Guardian and their multicolored entrails are splattered across the ground.  Beautiful but yuck!

What makes Blackest Night one of the best event comics of the past 10 years is that it seems real.  Not in the sense that dead superheroes wanting to eat your heart could actually happen, but in the sense that it’s one of the most organic crossovers ever written.  Because it was borne from another series that slowly began to escalate into a line wide conflict, Blackest Night never feels like an annual gratuitous crossover, as many event comics do.  It makes sense that something as encapsulating as the War of Light or the Blackest Night would invariably affect the rest of the DCU, and because the crisis is injected into the rest of the DCU with such precision, the Blackest Night comes off as being a much direr situation than previous event crises.  Blackest Night never feels complimentary or lifeless because it was the natural progression of what Geoff Johns was building to on Green Lantern.  But as we praise Blackest Night as the seminal comic event, let’s not forget that it all really started with Alan Moore.