The 55th BFI London Film Festival announced the shortlists and juries for the 2011 Festival Awards this week, heralding a star studded extravaganza that is due to take place at the prestigious LSO St Luke’s on 26th October.

The Best Film Award celebrates original, inventive and distinctive film-making in the festival – given that they are competing in a field of roughly 200 films this is quite the achievement. The initial shortlist was drawn up by Artistic Director Sandra Hebron (sadly in her final year as festival director) and the programming team, and will be judged by a impressive collection of industry figures including the Oscar-nominated director John Madden, Emmy and Golden Globe winner Gillian Anderson, the BAFTA-winning writer and director Asif Kapadia, Oscar-nominated and BAFTA-winning producer Tracey Seaward,  writer Andrew O’Hagan and the Turner Prize-nominated YBA and film director Sam Taylor Wood OBE.

This year’s shortlist is:

THE KID WITH A BIKE, Luc & Jean-Pierre Dardenne, Belgium/France/Italy

WE NEED TO TALK ABOUT KEVIN, Lynne Ramsay, UK/USA

Interesting to see four British directors in the list, with a clutch of exceptionally strong films in previous festival reactions are anything to go by…

The shortlist for Best British Newcomer is:

The Jury for the prestigious Sutherland Award, presented to the director of the most original and imaginative feature debut in the festival includes Turner Prize nominee Phil Collins, producer Andrew Eaton, director Joanna Hogg, BAFTA-winning director Peter Kosminsky, actress Saskia Reeves, Hugo Grumbar, managing director (International) Icon UK Group, and film journalist Tim Robey.   Peter Kosminsky said “I’m absolutely thrilled to have been asked to join this year’s Sutherland Jury by the BFI. The support of the BFI London Film Festival is a vital lifeline for new filmmakers struggling to achieve visibility in a crowded cinematic world. I am delighted to play a small part in assisting new talent to break through in this way”.

The previously announced Sutherland shortlist is:

Joanna Hogg said “‘I love the BFI London Film Festival. It’s a thrill and a privilege to be judging The Sutherland Award.”

The Grierson Award for Best Documentary, a partnership between the Grierson Trust and the Festival, recognises outstanding feature-length documentaries of integrity, originality, technical excellence or cultural significance.  The Award is presented in commemoration of John Grierson.  Two-time BAFTA winner Adam Curtis will chair the jury, which also includes documentary filmmaker Kim Longinotto, Mandy Chang of the Grierson Trust, and Charlotte Moore, Head of Documentary Commissioning at the BBC.

This year’s shortlist is:

INTO THE ABYSS: A TALE OF DEATH, A TALE OF LIFE,  Werner Herzog

On chairing the Best Documentary category, Adam Curtis said “It is a great privilege and I am really looking forward to watching all the films and I am also hoping that somehow the films will help me make a bit more sense of what is happening in the world at the moment because frankly not much else on television or the cinema is doing that at present”. 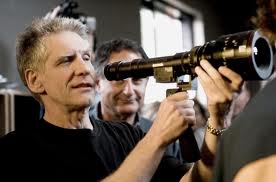 At this year’s ceremony, the BFI will bestow its highest honour, the BFI Fellowship, on David Cronenberg and Ralph Fiennes. The original and provocative Canadian filmmaker David Cronenberg is internationally renowned for films exploring the darker impulses and inner lives of his characters. His distinctive films have gone beyond the science-fiction genre and have had a powerful and enduring influence on contemporary filmmakers. His impressive list of credits includes The Fly, Videodrome, Scanners, Naked Lunch, Crash, Eastern Promises, The History of Violence and premiering at this year’s festival, A Dangerous Method.  David Cronenberg said “This is a monumental, in fact overwhelming, honour, and my being the first Canadian to receive it makes it all the sweeter. British cinema has been a potent inspiration for me, and to be associated with this particular group of filmmakers is tremendously exhilarating.” – funny how a film-maker reviled for his alleged sub-porno nightmares such as Shivers and Rabid is now firmly embraced – and rightly so.

Ralph Fiennes is one of Britain’s pre-eminent actors, who has achieved a singular career in which he manages to command equal respect among theatre-goers, lovers of art-house film and audiences for international blockbusters. With Coriolanus, featured in competition in the Berlin Film Festival 2011 and selected as a Gala screening in this year’s LFF, he has made a bold and critically well received transition to film directing. In addition to his portrayal of Lord Voldemort in the Harry Potter films, his extensive acting credits include The End of the Affair, The Reader, Strange Days, Spider, Quiz Show, The English Patient, The Constant Gardener and Schindler’s List. Ralph Fiennes said “I’m extremely honoured and delighted to be given this fellowship by the BFI”.