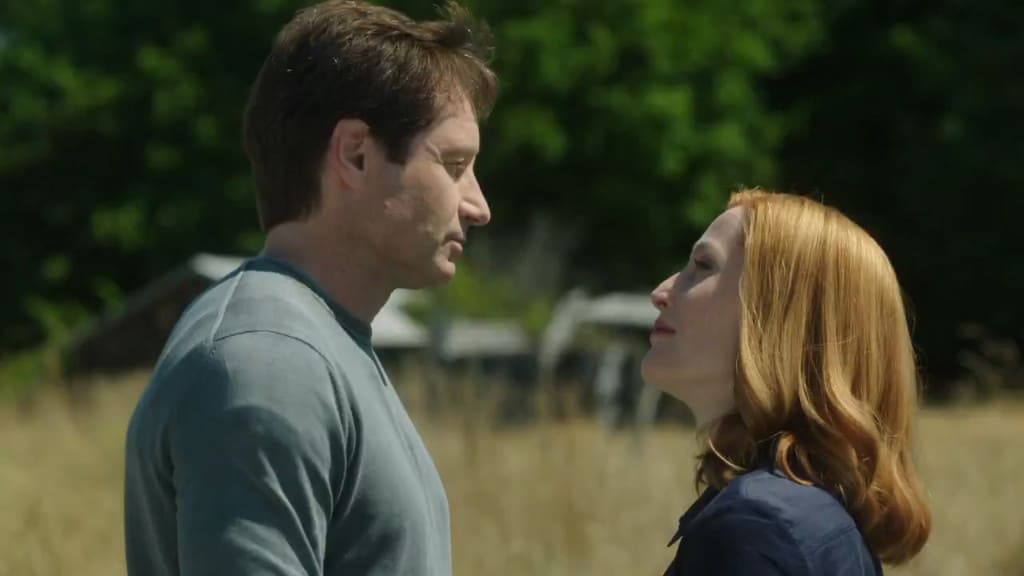 “This is so unnecessary, Fox.” – Cigarette Smoking Man

The government is poisoning you on purpose with vaccines they have always said were meant to protect you. A shadowy cabal of rich white men is planning global genocide in order to assert a new world order based on genetic supremacy. The powers that be have been systematically lying to all of us for decades. Aliens are real and that cabal we mentioned earlier are exploiting their technology to annihilate humanity. The War on Terror was and is a smokescreen designed to both distract us and consolidate power. Global warming is…real, and caused by human excess. (Whoops.)

In the world of The X-Files, the rational and the deeply, deeply irrational are constantly butting heads – that’s sort of the whole point. After all, the entire basis for the series, at its core, is the notion of a Man of Faith and a Woman of Science coming together to solve mysteries beyond comprehension in a universe gone mad. So it’s only appropriate that the lovably scattershot revival miniseries that brings us fresh X-Content for the first time in a decade ends with an episode co-written by two honest-to-goodness medical doctors (Drs. Anne Simon and Margaret Fearon, to be exact) and series creator Chris Carter. The medical professionals were likely brought on board to consult and bring an air of credibility to the episode’s (and the season’s) proposed conspiracy, in which the population has been systematically left defenseless against a multi-pronged onslaught of government-issue viruses, with only those lucky enough to have been forcefully administered a jolt of alien DNA (!) left to survive.

Shortly after we absorb this information, an Alex Jones-ian huckster played by, of all people, Joel McHale reappears to call this impossibly complex, seemingly global catastrophe an “attack on America,” in a final broadcast straight out of Romero’s Dawn of the Dead. Wait. Just America?

Carter’s bookending two-parter, “My Struggle” and “My Struggle II,” is absolutely full of these bizarre “whuuuh?” moments. The tone of these episodes is utterly committed and serious, yet his direction and dialogue is laughably overstated in almost every single beat. Moments that threaten to summon real gravitas bump up against long, thudding stretches of exposition and/or clumsy metaphor. In its most remarkable moments, though, the “My Struggle” episodes seem to act as both homage to and merciless parody of the actual beliefs of many Americans. In a Pew survey from last year, 41% of Americans between the ages of 18 to 29 believed that the decision to immunize kids should be “up to the parents,” a statistic that should worry anyone whose toddler has to share a playground with a few dozen others. Is it irresponsible or brilliant that Carter enlisted the help of two actual medical doctors to help him flesh out the ultimate doomsday scheme in the “My Struggle” two-parter, which turns out to be – you guessed it! – the end result of government-issued vaccines?

Before you attempt an answer, we should note that the one glimmer of hope in the episode comes in the form of…a vaccine, in this case one manufactured from the genetic material of Gillian Anderson, in what must constitute the most believable plot twist in the series’ history.

See also  20 Things You Should Know About Jon-Michael Ecker

Even amidst Carter’s clear attempt to create a clear, streamlined version of the X-Files mythology, one intended to straighten out the mess he left behind when the series was initially axed, these odd and sometimes hilarious fissures of logic and illogic can’t help but bubble up. This messy conflation of real and unreal, conspiracy and fact, drama and satire,  is appropriate – whether intended or not – for not only this new revival of The X-Files, but for the entire series, which even in its new form finds itself as an entity gloriously out of time in its surroundings. In the time since The X-Files first went off the air, the most broadly valued television has become a ferociously disciplined thing; the rise of showrunner-driven TV has allowed for some truly incredible series to emerge and redefine the medium, but at a certain cost. We’ve become so accustomed to creative consistency and rigidly defined tone that we’ve slowly let go of the wooly joys of the old model, wherein individual writers could emerge from a hungry writers’ room and isolate a particular aspect of a series’ concept in order to cast it in a new and distinct light.

The original run of The X-Files was one of the most extreme cases of this phenomenon. A variety of creative voices – from Darin and Glen Morgan, to Vince Gilligan, to James Wong, all the way to David Duchovny himself, emerged to develop personal visions for the series whenever they got the chance, aided by a production model that tended to let these insurgent voices direct their episodes as well as write the teleplays.

See also  Survivor 26.12, “The Beginning of the End”: Two contenders exit, and one’s a big surprise

For all its faults, the new revival of The X-Files manages to preserve the kaleidoscopic quality of the original run despite the severely truncated six-episode order. While Carter’s bookending episodes are dour and portentous, his other writing credit, “Babylon,” might be the most gloriously doofy hour of television to air on a broadcast network since, well, The X-Files, with Mulder successfully preventing a wave of suicide bombings by taking a (fake!) dose of hallucinogens and embarking on a Bill and Ted-esque spirit quest scored to Tom Waits’ “Misery Is the River of the World.” Equally silly but much more disciplined, Darin Morgan’s “Mulder & Scully Meet the Were-Monster” managed Morgan’s typically miraculous blend of humor and philosophical inquiry via a remarkable performance from Rhys Darby, as brilliantly cast as McHale is miscast in the Carter two-parter. Morgan lovingly sets an entire expository sequence at the foot of a mock gravestone for Kim Manners, the crew-adored workhorse who manned 52 of the original run’s 201 episodes. Amidst the jokes about the absurdity of human rituals, there’s a potent reminder of a real human life really lived essentially staring us in the face.

Throughout Morgan’s episode, there’s a clear sense of a true genre craftsman who both understands the tropes he’s working with and knows just how to contort them for maximum effect, without resorting to mere parody or gimmickry. For lack of a better word, Morgan’s teleplay for “Were-Monster” is soulful, with actual ideas about mortality, humanity, and the particularities of sentient life to convey. And yet, and yet – as much as we might daydream about the concept of a Darin Morgan season, it’s the relative scarcity of his episodes (he has only five X-Files to his name, still the most he’s written for any series by a significant margin) that has always made them that little extra bit special. In his episodes we see a splinter rendition of The X-Files that is essentially a smaller series in and of itself.
For better or worse, that sense of a series in conflict with itself is all over this revival of The X-Files, and in that sense it might be the truest yet of this new wave of nostalgic television resurrections. In the world of The X-Files, as in our own, conspiracy theory is an inexact science, constantly reframing its argument at its own convenience, shifting at the same pace as the irrefutable facts that should silence it. Just as it’s impossible to imagine Alex Jones emerging from his libertarian hidey-hole exclaiming “it all makes sense now!”, the ultimate sin this revival could have committed would have been for The X-Files to return as a rational beast that spoke only in perfect rationalities. After all, the truth is out there, not here. Never here.