“For the Girl Who Has Everything” seemed to be a turning point for Supergirl, as this week’s outing finds Kara and company dealing with the emotional fallout of the events to date. The death of Astra, Kara’s aunt and one of the show’s ongoing antagonists, marked a shift to the series that was both surprising and affecting, as the event has now put her at odds with Hank, who is the one that Kara believes killed Astra. “Truth, Justice and the American Way” takes the time early on to give Kara a sequence to mourn, as the rogue Kryptonians honor Astra with a rocket-coffin sendoff. The sequence serves as a reminder of Kara’s conflict between her alien heritage and her loyalty as Earth’s protector, and also sets up a ticking time clock of when to expect more shenanigans from Non and his group of Kryptonian baddies.

Since the show is so divided by Kara as Supergirl and Kara as Cat Grant’s assistant, there can be issues when trying to integrate the two storylines together, so after establishing that James knows about the Kara’s work for the DEO and the DEO knowing about James in the previous episode, some cleaner blending of the two is now possible. James’ conflict with Kara addresses the Max Lord situation and how imbalanced it was for the DEO to arrest Lord without hard evidence. This had been a sour point in recent episodes, as it was very unlike what we would expect from Supergirl, but it appears that the arc had a purpose, and that was to get Kara to learn about justice. Max Lord also had a bit of an arc as well, as he was utilized to save Kara in the past episode, but even so he will continue to be an ongoing antagonist. The resolution of the Max Lord plot isn’t entirely satisfying, as the fears the DEO had about letting go of Lord was that he would reveal Supergirl’s identity are defused by threatening to expose crimes that Lord has committed. Although the Cold War parallels of Mutually Assured Destruction are appreciated, it still doesn’t stand to reason that the DEO doesn’t go forward with bringing down Lord if they could. It’s just a reminder of how Lord is Supergirl’s biggest problem. 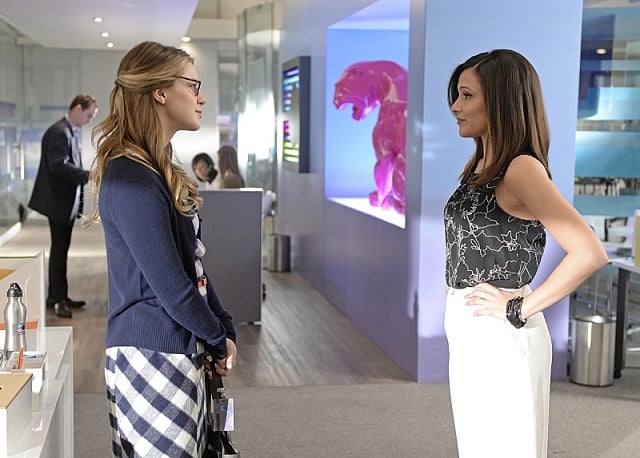 The lesson about justice that Kara learns is pushed forward, as the series often does, by the threat of the week, which is Master Jailer, one of the guards that worked at Fort Rozz prison before it became the show’s super-powered-alien-producing plot device. The story develops pretty cleverly by first having the alien threat that the DEO was after be another Fort Rozz escapee, but then have the turn that said escapee turns out to be the victim of the episode’s true menace. Master Jailer appears as some kind of space knight with lasers that shoot from his wrists and chains that appear magically, not to mention a laser guillotine used to execute his prisoners, an interesting touch that suits the character’s medieval quality. The fight sequences are particularly well-handled by director Lexi Alexander, featuring Kara doling out some impressive fight moves against the villain including a chain spinning blow and a head butt. Kara learns about justice not being so absolute when she discovers one of the Fort Rozz prisoners that Master Jailer would sentence to death was not a danger to Earth. In fact, the former inmate had assimilated to Earth and became a contributing member of society as an astronomy teacher. This proves to Kara that rehabilitation is a part of justice served.

There’s some movement in Kara’s CatCo daily life as well. After being absent one day from her assistant job, Cat Grant has decided to hire another assistant and demote Kara to being her number two. Here we are introduced to Siobhan Smythe, an ambitious and power-hungry obstacle to Kara’s office job. This is actually a pretty neat wrinkle to add to Kara’s workplace, as this adds a new variation to the conflicts she faces at work. Italia Ricci quickly makes an impression as Siobhan, making her out to be a conniving and competitive person as she riles up Kara with probing instant messages and her sinister wink to Wynn. It will be interesting to see what Supergirl does with Siobhan and how quickly they develop her arc.

“Truth, Justice, and the American Way” focuses on the its titular themes well while still advancing the season with steady precision. Although the show still has its issues, the writing is improving the more it addresses and integrates the Supergirl team with compelling conflicts.