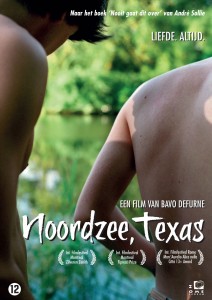 A wistful mother and her seventeen-year-old son take in a gypsy traveler as a house patron. After a slew of ceremonious courtesies, the mother and her son pit themselves against each other, in hopes of seducing the same man.

North Sea, Texas tells the story of Pim (Jelle Florizoone), an introverted teenaged boy who struggles with his apparent homosexuality and his fatally nostalgic mother (Eva van der Gucht). An avid drawer, Pim confides in his illustrations, and when his relationship with an older boy, Gino (Mathias Vergels), begins to escalate, Pim discovers his indelible muse.

In terms of a ‪raison d’être‬, North Sea, Texas doesn’t really have one. The film isn’t narrative driven, nor is it a character study. At its core, the film, like its characters, exists as a form of voyeurism, exhibiting Pim’s strange and unusual methods of understanding the world around him.

Ostensibly somber and meditative, the film, although lacking a cohesive plot, never fully succumbs to ennui because the characters and their actions are so unpredictable. Because they are so off-the-cuff and spontaneous, every scene of earnestness is underlined with anticipation for humour, and when the incongruently absurd comedy finally arrives, it’s enhanced tenfold due to the juxtaposition with its antithetical set up.

Although the film embraces its non-sequitur narrative scheme, there is nevertheless a small semblance of a plot regarding Gino and Pim. These parts feel dangerously undercooked, even considering the film’s potluck sensibilities. The ending is also a bit lifeless and drawn out, with numerous points in the film’s final ten mintues where it could’ve ended.

As a whole, the film never truly coalesces, but as different parts, North Sea, Texas incessantly arouses ones curiosity. Watching Pim and his counterparts doing perplexing things (note the shoebox of romantic mementos) is enjoyable in and of itself, with the small coming-of-age story, however lackluster, adding a quirky dimension.