We all have holiday traditions. Growing up in Western Pennsylvania, then Central Ohio, then Western Pennsylvania again, we had more than a few Christmas ones. Every Christmas morning, we weren’t allowed to open a single present until my father finished his coffee. And he took his time. When he finally gulped down the last swallow, we were still required to open one present at a time. None of this chaotic ripping into boxes and bags simultaneously while no one paid any attention to anything anyone else opened. We all watched each other one-by-one open a gift, thank the giver, and look to the next person in the circle to take his or her turn. 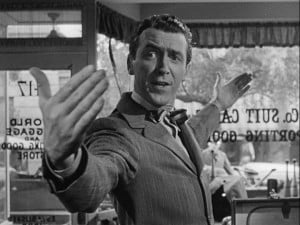 Outside of those Christmas Day traditions, we had one Christmas Eve tradition that was never, ever, EVER under consideration for alteration. Every year, we’d go to church for the 45-60 minute evening service (in our second stint in Pennsylvania, I usually played with the bell choir, so I had to get there an hour earlier for practice), do the minimal socializing afterward, and return home, usually close to 9:00 PM. So, already a mix between tired and beyond excited for the haul we would bring in the next morning, we would all sit down in front of the television and settle in to watch a VHS copy of Frank Capra’s iconic holiday staple.

It’s a Wonderful Life isn’t exactly a movie elementary school children make a conscious decision to watch. In a childhood era that saw the releases of Home Alone, it’s superior sequel, Gremlins, and other holiday themed movies more geared toward my demographic, I was the only kid I was knew of that had to sit through this boring 40+ year old, public domain snooze fest (besides my little brother, of course). But, that’s what my father did growing up, so that’s what he passed on to us. No ifs, ands, or buts. 130 minutes of black-and-white – no explosions, no talking puppets. Nothing unexpectedly hits anyone in the head.

So, every Christmas Eve, we sat in the living room and watched as George Bailey saved his little brother from drowning, lost his hearing in one ear, and put all his big plans on hold and stayed in Bedford Falls (I’m pretty sure it’s in New York, but it’s never clarified). He married a childhood crush (Donna Reed was gorgeous in this movie, no doubt), had a ton of kids, and took over the broken down old Building and Loan, if only to keep evil Mr. Potter from turning the whole town into slums. At first, it was a nightmare. Just let me go to my room and stare at the ceiling for two hours while I wonder what I’m going to unwrap the next day. Hopefully, I’d fall asleep before midnight. But, no. That wasn’t in the cards until “Atta boy, Clarence!” escaped Jimmy Stewart’s lips.

Much to my surprise, I slowly began to warm to the film artifact. I honed my Jimmy Stewart impression to amuse family members (“Well this is a VERY interesting situation!!”). I caught myself smiling every time the floor opened up in the middle of the gym during the Charleston contest. I started to feel pain every time something else would stand in George’s way from becoming the world traveller he dreamed he would be. I was never concerned that Potter was going to ruin Bedford Falls and the lives of all the families there, but I was crushed when the only way to prevent it was for George to stay home. And don’t get me started on Harry Bailey, that little punk of a brother. George couldn’t go to college because his father died, so he gave the money to Harry. He couldn’t serve in the military because he lost his hearing rescuing his stupid brother when they were kids; Harry went instead and became a war hero. All the while Harry apologized, knowing he was partially to blame for his brother’s stagnant lifestyle. But George took it on the chin like a champ. Every time. Every damn time.

By the time I got to high school, I began looking forward to the tradition. I found new moments to focus on, studied the filmmaking itself, and just took in the message, however saccharine it may be. I laughed at Uncle Billy’s drunken stupor (though I would argue he was the true villain of the story; he screwed enough up, anyway). I adored Mary’s honeymoon sacrifice to support her new husband, handing over their stack of bills just to keep people afloat. I cringed as George ripped Zuzu’s teacher a new one for sending his daughter home with an open coat. It never felt like a chore anymore; it felt like a privilege.

When I finally left home for college, I still came back for Christmas break each year, excited for our family movie night. At that point, I had developed a love for film that went beyond the surface. I had begun studying and searching out foreign cinema, independent film, and little pockets of cinema well beyond the tired holiday classics. Add onto that all the other Christmas staples I had grown to love, like National Lampoon’s Christmas Vacation, A Christmas Story, and Elf. But it always came back to It’s a Wonderful Life. It’s simple, but that’s where the beauty was. Watching George Bailey see what the world was like without him broke my heart year in and year out. Watching Jimmy Stewart in that bar, filled with angst as he prayed to a God whose existence he questioned at that moment; that was a moment of pure acting I would put up against any other. 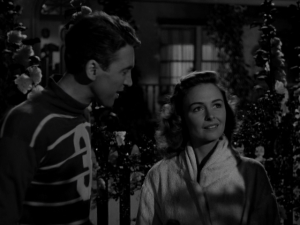 It dawned on me that, in my tumultuous relationship with Capra’s classic, my shift was more because I was never ready to commit. When we first met, I was too young to understand what I was missing. As I grew, I jokingly accepted it as a part of my life, but only in the fleeting way, still hoping for the year my father would finally say, “You know what? Let’s watch Die Hard this year instead.” Finally, as I reached a maturity level where Capra’s go-to themes made sense, I started to see it for what it was the whole time. And I fell in love with it.

Last year, my upstate New York home finally got a good size downtown theater that, much to my surprise, showed more independent and off-the-beaten-path movies in the form of a Bow Tie Criterion Cinemas. As a bonus, they also run a weekend series where every Saturday and Sunday morning, you can watch classic films and drink mimosas. Every December, these classic spots are filled with holiday movies. As luck would have it this past year, the Saturday before Christmas, they were showing It’s a Wonderful Life when my parents were in town. So the three of us took in the movie, watching Capra’s masterpiece on the big screen. I hadn’t watched it since the last Christmas Eve before I moved to New York in 2006. So, seven years since my last viewing, I sat beside my mom and dad in that pitch black theater, staring at that enormous screen as George Bailey returned home to his family and friends, everyone dumping money into a bowl in his living room. And as Martini overturned his tip jar and Sam Wainwright’s telegram is read allowed (stop), I cried. I fought it for half the movie. I fought it for over half my life. I finally gave in after 30 years of love for what I now call my favorite movie.

It’s a Wonderful Life isn’t a perfect film. In terms of true filmmaking prowess, it may not even be Frank Capra’s best film. It’s certainly not Jimmy Stewart’s best overall performance (Rear Window, for my money). It’s not even the best film of 1946 (you could go a number of directions – Notorious, The Big Sleep, Cocteu’s Beauty and the Beast). But, it’s the movie that makes me feel at home. And, odds are, despite my love for the film, I won’t watch it this Christmas Eve. We are usually pretty tired getting things ready for the kids, who are only four and two years old right now. But the year my boys are finally old enough to sit still start to finish for an entire movie, I plan to make this one of their first ones. So, in a few years Riley and Brady will begin their conflicted relationship with a film made over 60 years before they even existed. And I can’t wait. And I have my dad to thank for that. 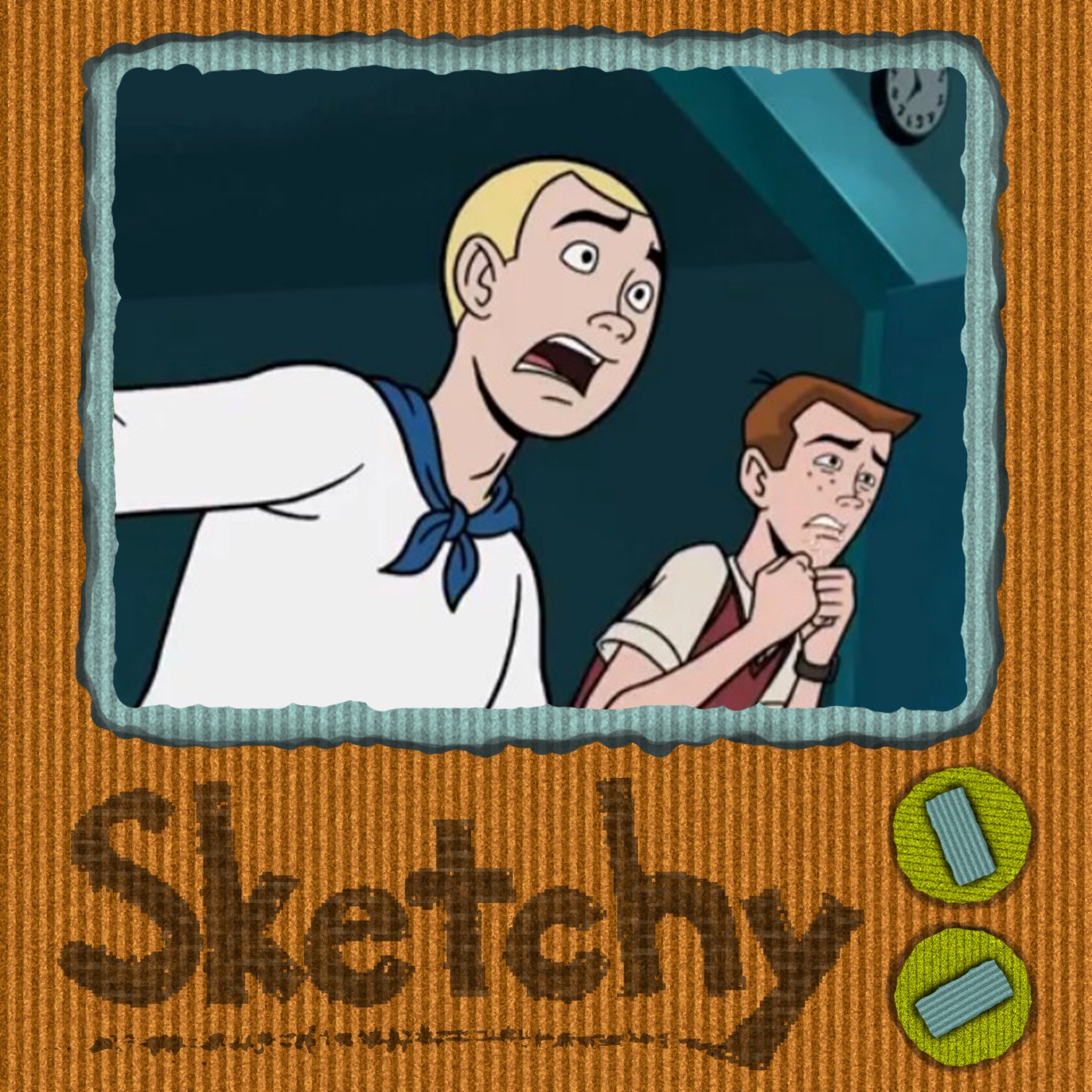