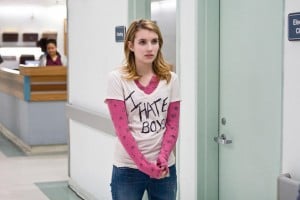 In case anyone thought mildly deconstructionist efforts like (500) Days of Summer might have signaled the end of the stereotypical “indie” quirkfest, they’re sorely mistaken, as It’s Kind of a Funny Story – surely the year’s most mistakenly presumptive title – not only fits the cumbersome mold to a tee, it actually finds new ways to encourage cutesiness-induced wincing. This is doubly disappointing since writer-directors Anna Boden and Ryan Fleck’s previous films (Half Nelson, Sugar), while imperfect, at least managed to steer themselves away from either obnoxious moralizing or the “twee” indie signifiers that have become commonplace in the post-Garden State landscape. Here, Boden and Fleck take a nosedive into spectacularly unsavory territory with wrongheaded gusto.

The problems start early. Our ostensible hero is Craig (Keir Gilchrist), a smart, well-spoken 16-year-old whose problems extend to having a distant workaholic father (Jim Gaffigan), a “fragile” mother (Lauren Graham), and a crush on his best friend’s girlfriend (Zoe Kravitz). These issues, as well as a case of “stress vomiting,” lead Craig to convince an intake nurse to admit him to a psychiatric ward, where he is placed for a minimum 5-day trial. There, he meets two characters of note – Zach Galifianakis’ tortured, wise Bobby and the pretty, pleasant and literally scarred Noelle, played by Emma Roberts – and a whole issue of familiar “Hollywood crazy” caricatures. In the best-behaved mental ward in film history, love blossoms, lessons are learned, and all involved can hopefully write this one off as an isolated incident. This is the kind of movie where every mental patient is charming and adorable, as opposed to tragic or unsettling.

There’s one bright spot. Galifianakis has been typecast as funny-crazy since The Hangover, and he’s intriguing here as a man whose instability is difficult to measure thanks to his gentility. It’s a credit to Galifianakis that both his mildly wacky scenes and one that contains a stark admission of his suicide attempts are equally credible. It’s a performance that suggests notions far too weighty and considered for this movie to handle. Gilchrist does his best, and has a certain puppy-dog charm, but he’s saddled with so much cloying narration and noxious entitlement that it’s a hopelessly uphill battle. It doesn’t help that he’s written as a brilliant artist, a great singer and a gifted intermediary. Boden and Fleck’s script is cruelest of all, however, towards the not-unappealing Emma Roberts. Noelle might be the most blatant Manic Pixie Dream Girl to emerge in the last five years – where she might have represented a challenge to Craig’s maddeningly transient personal issues, she’s instead portrayed as just another girl with a mildly distressing past (whose details are deliberately avoided) who falls head over heels for our stammering hero, just because. Yes, she’s a “cutter,” but any notions of actual mental distress or emotional trauma in her character are never addressed or even considered. Noelle is just a normal, pretty girl who happens to be in a mental institution; she’s an offensively implausible figure.

Beyond the frustratingly empty characterization, Boden and Fleck make a series of mind-bogging aesthetic choices that would have suffocated any script. The still-frame interruptions and animated sequences are maddening enough, but the worst offender is a sequence in which a music-room jam session (Queen and David Bowie’s “Under Pressure,” of course) morphs into a full-blown lip-synced stage performance, complete with costumes. Not only does it seem to stretch out into eternity and serve no purpose on a plot level, it’s shockingly ugly and poorly executed. The sight of Gilchrist, Galifianakis and Roberts hamming it up in glitter on a spotlit stage sums up the experience of sitting through It’s Kind of a Funny Story: no matter how the performance comes off, all involved lost just by showing up.