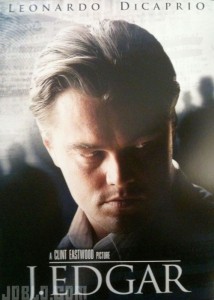 Clint Eastwood has a deceptively simple formula for filmmaking:

Start with a great script. Work with a talented crew that you have known for decades. Hire talented actors and let them work. Work quickly. Go home at a reasonable hour every night. Finish the film on time and on budget.

It is the formula of a craftsman, the measure twice, cut once philosophy of a master carpenter. If Woody Allen is a film archaeologist, using film to peel back the bones of a city and Martin Scorcese is a

crazed chef, blending ingredients that seem like they should never work together, than Clint Eastwood is the filmmaker as cabinet-maker, turning out solid, useful films built according to classical blueprints.

In this case, Eastwood takes us from 1919 to 1972 in the life and career of J. Edgar Hoover, but not in a straight line. Throughout the film, Hoover narrates his life story to a series of FBI agents, so that they can write the definitive history of the bureau – the history of the FBI and of Hoover being one and the same. The film then follows two parallel streams, the first beginning about 1960 with Hoover narrating his past while also trying to protect the future of his bureau and his own position, the second starting in 1919.

Dustin Lance Black’s smart script is filled with telling little details – according to the film, before joining the Bureau of Investigation, Hoover created the classification system for the Library of Congress. One of the big themes of the film is that Hoover was a great administrator and records keeper, who dreamed of being remembered as the nation’s top cop.

Hoover’s inability to separate himself from his bureau and his all-consuming ego is revealed in a two telling moments with Robert Kennedy (Jeffrey Donovan). When Hoover goes to see the Attorney-General with an audio sex tape of the President banging a Cuban embassy girl, he uses the tape as leverage to keep his job and get the authority to carry out wire-taps on the civil rights movement. All the while he admires the fireplace in the Attorney-General’s office. When JFK is killed in Dallas and Hoover is informed before he anyone else, he calls Robert Kennedy to pass on the news, while standing in front of a replica of the Attorney-General’s fireplace.

Hoover’s dictated memoirs are part of a cycle of manipulating the media and commandeering the spotlight. In one critical sequence, Hoover goes from being booed off the screen in newsreels, so that the crowd can cheer for Jimmy Cagney as a crook in Public Enemy, to being kissed on the cheek by Shirley Temple in a photo opportunity at the premiere of G-Men with Jimmy Cagney playing a heroic F.B.I. agent.

This makes Hoover an unreliable witness and an unrepentant liar. Just because we see it on the screen does not make it true. As Hoover’s confidante Clyde Tolson (Armie Hammer) reminds him late in the film, “We made that up to sell comic books.” This is a question that the film never really answers, but that makes the film stronger not weaker. It is clear that DiCaprio’s Hoover is attracted to Tolson, but denies those feelings – warped by his mother’s homophobia. Instead, Hoover has relationships with Lela Rogers (Lea Thompson), Ginger Rogers’ divorced mother and later, Dorothy Lamour – provoking jealous rages in Tolson.

DiCaprio’s performance is nuanced and brilliant as a man so consumed by secrets and lies, that by the end of his life he can no longer recognize the truth. You could say that it took a filmmaker like Eastwood to construct this film, to build a closet for a man so in denial that he  is a mystery even to himself.