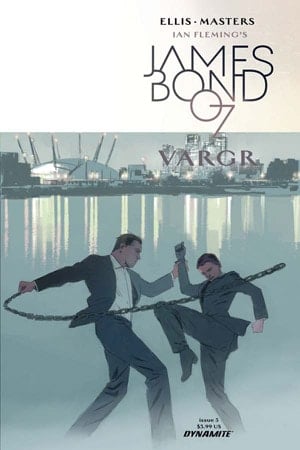 When readers last left secret agent 007, he was trapped by the villainous Kurjak in a sealed research facility room with detox systems fully operational. With the temperature rising at an alarming rate, Bond’s quick thinking wins the day, and after enjoying a delicious cigarette in the cool night air, the protagonist heads back to HQ in London for the next step in his mission. While Kurjak’s German-based laboratory is yesterday’s news, there are still shipments of his synthetic drug being imported into England, wreaking havoc on the lower classes. When M orders Bond to liaise with MI5 at the London docks to intercept the next clandestine ship, 007 gets more than he bargained for when old nemesis Dharma Reach, infuriated by the death of Masters, ambushes him…

#5 of the new James Bond series arrives as something of a relief for fans. With many series, be they in tv, film, or comic book form, utilizing the penultimate installments of their arcs as either lazy padding or set-up with the promise of a big finale, writer Warren Ellis and artist Jason Masters refuse to let up. This fifth issue is replete with gorgeously dramatic and dynamic panels that help briskly move the plot along, with not one but two life-threatening problems for Bond to contend with over the span of 24 pages. Sandwiched in between the two aforementioned challenges is a cleverly devised and written intermission back at MI6, with stalwarts M, Tanner and Moneypenny making cameos to fill in Bond and the readers on the scope of the threat fast approaching England. What’s more, Ellis continues to milk, albeit successfully and with a side serving of wit, the series’ jabs at bureaucracy and how the decisions arrived at by the big hats handicap Bond’s job more than they tend to facilitate it.

See also  'The Living Daylights' didn't reboot Bond, but had a lot of fun within the formula

For that matter, issue 5’s entire structure is worthy of interest. The first bit of dialogue uttered by any character is at the bottom panel of page 5. From there the reader earns a reprieve at MI6 for a few pages before Ellis and Masters get back to extremely simple but effective storytelling via wisely planned, wordless panels as 007 and the assassin Reach engage in what could be their final tête-à-tête. It’s a bold move, especially considering how well Ellis writes his dialogue, to say nothing of the heaps of praise thousand of people have sang regarding his talents as a writer in general. The latest issue is, arguably, the best demonstration thus far of how strong of a partnership Ellis and Masters have formed. There clearly exists a trust between the two, with Ellis acknowledging when he should take a back seat and allow Masters’ work to shine more than his own.

In that light, for the first time since the series began, the art actually does more of the heavy lifting than the dialogue, whereas in the first 4 books both were equally important. The first 3 pages are beautiful to behold, with rich orange and red hues communicating the heat of the laboratory room so effectively one might start to think their own hands are burning up as they hold the book. While action beats such as the rousing opening sequence are what most read the comic for, one should not overlook the quieter moments that further emphasize precious character beats. For instance, once Bond finally escape’s Kurjak’s laboratory, a full two pages are awarded to allow Bond to catch his breath, cool off for a moment, sit down on the front steps of the establishment, and calmly enjoy a cigarette, which is reminiscent of issue 3 when Bond went to a bar to chill out after obliterating an entire gang of arms dealers. After staring death in the face, 007 is the sort of man that relishes in some vices that are known to kill people in the long run anyways. That’s exactly what the Bond of the Fleming novels would have done. That’s exactly who the Bond of the Fleming novels was. The longer this comic series goes on, the more it becomes apparent that its creative minds are intimately familiar with the character and his world. Fun nods to elements from other iterations of Bond lore are amusing too. Thankfully Ellis avoids relishing  in them too much, but every now and then a small detail will catch an aficionado’s eye, such as when MI6 sends a man to Heathrow to pick up Bond with the sign ‘Peter Franks’.

James Bond #5 gets the adrenaline pumping in the leadup to the concluding issue of the VARGR storyline. What could have been a meandering 24 pages of explanations, revelations, and set-up is really an action-packed, brisk read with critical tidbits communicated so the reader knows where Bond will be heading for the final lap of his mission, and why. There is maybe one nagging element that disappoints, but going into detail would spoil an important part of the book’s plot, and since the issue is brand new, it is probably best to leave the subject alone so as to avoid spoiler. In any event, the positives grossly outweigh the negatives. Ellis and Masters are thus far earning their own Double-0 statuses.