Jem and the Holograms #11

Welcome back, Sophie Campbell – I am happy to see your effervescent artwork again!

Issue #11 kicks off the new “Dark Jem” arc. As such, it does quite a bit of stage-setting. Thompson finally introduces the Starlight Girls, gives equal time to developing the character conflicts and betrayals in the Misfits, and kicks off the take over of Jerrica and her sisters in the form of a corrupted Synergy.

Now that we’re into the third arc, and Thompson has well established the characters of the two bands, including the ancillaries like Clash and Eric, the world broadens to include the Starlight Girls, who in the cartoon were orphans taken in by Jerrica’s father and cared for through the estate. Here, five of them are performing for the Holograms. Initially they sound great, but then one of them musically drops the ball, and they all turn on each other with pointing fingers. The Holograms encourage them to work as a team and understand the fights will happen, but they have to stick together. This will be the main theme of the issue and the source of nearly all of the conflict. 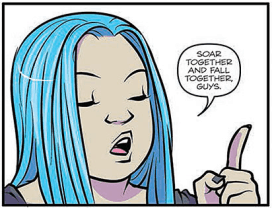 The conflict is most dramatic in the Misfits. As Pizzazz rests in the next room, Jetta heartlessly jokes that if Pizz dies, she’s claiming her cat. Stormer reprimands her, but the tension is set. Are the Misfits going to stand by Pizz or leave her behind. It turns out they don’t have much choice. Their contract with the record label won’t let them cancel dates on the tour to allow for Pizzazz’s recovery, so they’ve got to find a new lead singer. The tension escalates between them because Pizzazz doesn’t know.

Seeing Pizzazz in recovery makes her incredibly sympathetic. Stormer is the only one who shows her real empathy, bringing her hot tea. Aside: the mug is totally awesome, labeling the contents as “Male Tears.” Seriously, between that and naming the kitty Mad Martigan, Pizzazz has become my second favorite character behind Aja. Pizzazz must speak in a whisper due to her damaged vocal chords, and so the reversal of her character, from loud-mouthed force of anger to soft-spoken lump of sad, is a direct parallel to the reversal about to be introduced in the Holograms through the infected Synergy.

Apparently it is unseasonably hot, so the Holograms want to throw a pool party. Jerrica just organized a party and doesn’t want to be stuck doing all the work. While she’s separated from Aja, Kimber, and Shana as they clean the pool and invite their friends, Synergy strikes, playing a discordant song for her. Initially the music is visible jarring, but after hearing it, a seemingly bewitched Jerrica asks to hear more. Her eyes, and Synergy’s, are now black, as are her iconic star earrings.

She goes on to show up at the pool party with newly black hair, black make-up, and a shark-designed swimsuit. She calls the Holograms in to Corrupt Synergy’s lair where they are played the same jangling noise and infected like Jerrica.

Sophie Campbell’s art is masterful. It elevates and celebrates the original cartoon’s narrative. The hair, make-up, and costume designs for the characters are inventive and evocative. The framing offers creative perspectives. In one shot, the frame mimics a cinematic “fridge shot” where the camera is placed inside a fridge looking out at the characters. Rarely, does a comic book panel end up being a straight-on medium shot. Perhaps  the most overtly and awesomely creative of her illustrations comes from the auditions for the replacement lead singer for the Misfits. Each singer has a different look, facial expression, font style, color scheme, and word bubble outline. The visual variation easily evokes different vocal styles on the page.

Jem and the Holograms #11 lays the groundwork for what is going to be an outrageous but also authentically emotional story arc. Building on the character development of “Showtime” and
“Viral”, “Dark Jem” promises delicious character reversals. I can’t wait to see where Kelly Thompson and Sophie Campbell take it.