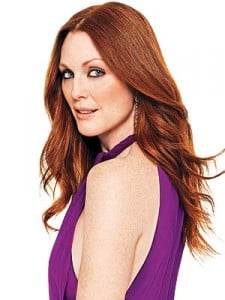 It has been a good awards season run for her this year, nominated for several awards for her The Kids Are All Right role, could she now be aiming for the next awards season? The blogosphere exploded today, with confirmation from The Hollywood Reporter, that Julianne Moore has been cast as former Alaskan governor/ex-Republican Vice Presidential candidate and recent reality star Sarah Palin.

This role is for the upcoming adaptation of 2010’s best selling book Game Change: Obama and the Clintons, McCain and Palin, and the Race of a Lifetime by co-authors Mark Halperin and John Heilemann. Game Change‘s story centers around the 2008 US presidential election and the various figures involved in it as indicated in the title; specific to Moore’s role it “follows John McCain’s 2008 presidential campaign, from his controversial selection of Palin as his running mate to their ultimate defeat in the general election”

Before production begins for Change, Moore will keep busy with a previously announced small role in the Robert De Niro and Paul Dano (There Will Be Blood) led Another Bullshit Night in Suck City, based on a memoir by playwright Nick Flynn. Suck City is written and directed by Paul Weitz (Little Fockers, Cirque du Freak: The Vampire’s Assistant)

Game Change will be produced in part by HBO Films and to be directed by Jay Roach (Recount, Dinner for Schmucks) with a screenplay from Danny Strong. The two will also serve as executive producer and co-exec producer respectively, on the film.