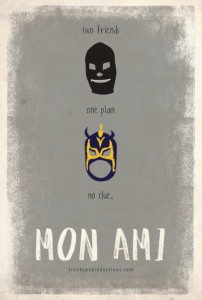 *Mon Ami had its world premier at the 2012 Fantasia Film Festival back in July.

Buddy flicks are a staple of the comedy genre. Two or more characters who know each other very well, their relationship at the start of the picture being amicable or not, are thrust into a situation either of their own doing or due to circumstances beyond their control, a situation which quickly spirals frantically into a good old fashioned, grand scale mess. Either the the characters who were not on friendly at the start of the film have learned to appreciate one another in ways they could never have fathomed, or they have further solidified their bond, now unshakable. Writer-director Rob Grant gave audiences his second feature length film not so long ago at Fantasia 2012, with the world premier of Mon Ami, a film that takes the buddy comedy premise and gives it a balsy kick in the, well, readers surely understand.

Teddy and Callum (Mike Kovac and Scott Wallis respectively) are two employees of a hardware store. Their lives are, for the most part, heading nowhere fast, with the disappointment of their existences driving them more and more. Teddy is dealing with a marriage which appears to be growing on his nerves more than anything else despite that he might not admit to it, whereas Callum, clearly not the ambitious type, is increasingly melancholic for the days when he and Teddy could just hang, a far rarer activity these days since his friend tied the knot. Looking to make some quik cash, the two see a glowing opportunity in snatching a nice bounty on the night of their employer’s Christmas party, during which the owner reveals he will soon enter retirement, handing over the reigns to his two obnoxious sons. With this additional bit of frustrating news adding further bitterness into their lives, the two best friends concoct a plan to kidnap the boss’ daughter, Crystal (ChelseyReist) and hold her for ransom over the course of a few days. With the help of a eccentrict drug/tools/costume dealer (Bradley Duffy), Teddy and Callum execute the first step of their plan, kidnapping, although not without some difficulty. If that was not already hard enough however, things do not get any easier for the two bumbling newbie criminals when time comes to handle their unfortunate prisoner…

There are some movies which preserve their true nature hidden from the audience until the final few frames. Only when everything erupts, in terms of narrative drama, does its shell break, thus enabling the viewer to better comprehend just what sort of world the filmmakers have concocted. Rob Grant, while not making a very mysterious film, does in fact paint the fullest picture of what exactly the viewer has witnessed in the final stretche of the story. This has nothing to do with any questions posed by the protagonists which remain unanswered throughout, or any strange shadowy figures on which light is shed in the dying moments, but rather a better understanding of why Teddy and Callum have behaved the way they did all along. In essence, Mon Ami is a farce, one that presents a very, very heightened and, dare it be said, far fetched depiction of the world we live in, what certain people are capable of when desperate to gain any kind of personal victory in their miserable lives   and how others react when their loved ones are attacked. Certainly, the film is not intended to be taken in all seriousness. Director Grant offers a vision of the world infused with a sense of hysteria, where the thought process of the characters follows a logic no ordinary man or woman would deem acceptable. Without spoiling the film (which, at the time this review has been published, not many people have seen, at least not yet), Mon Ami’s conclusion reveals that not only are Teddy and Callum far fetched characters, but that they are far from alone in acquiescing to macabre behaviour. 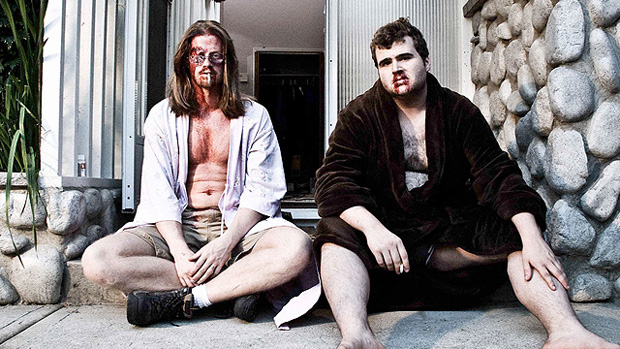 In some ways, this proves to be a double edged sword, although thankfully the film is blessed with more positives than negatives, and even then, the negatives pertain far more to the details and nuances of the characters rather than blatant mistakes in the writing or acting. On the plus side, the movie invites audiences to laugh it up as Teddy and Callum, two characters who are in over their heads if there ever were any, attempt to pull off something they know next to nothing about, that is, a ransom kidnapping. Not only are they unfamiliar with the procedures for kidnapping, but their idiocy extends to how to feed an unconscious person, how to deal with evidence of their wrongdoing, how to shield themselves from outside forces tracking them down and, lastly, how to dispatch of ‘excess baggage.’  On those counts alone, Mon Ami proves to be rather amusing on numerous occasions, with the occasional showcase of bravura reminiscent of that many South Korean filmmakers have proven to be impressively adept with in recent years when juggling disturbing, rotten human behaviour with comedy. In any  other film, no one would be laughing, but in the case of Mon Ami, because director Grant and his cast are, generally speaking, capable of rising to the occasion, the pleasing rewards for the viewer will leave them aroused and amused.

The balancing is far from being a simple task. Nothing seems easy when it comes to comedy, one might assume, and even though the movie is solid for the most part, there are a few small hiccups here and there. The most obvious would be the uneven tag team performance of the starring duo. Mike Kovac, as Teddy, is very strong, playing his part with an amusing nervousness which ensures his character is ever so slightly more believable. There is no mistaking the fact that his decision making is totally insane for the mere fact of engaging himself in such a dangerous, irresponsible and immoral plan, but Kovac, in his own excitable way, brings a little bit of nuance to Teddy. Scott Wallis is not as convincing however, coming off, as least between the two stars, as the more inexperienced actor. There is a handful of good moments courtesy of his enthusiasm, but occasionally the fun a viewer might have with Wallis is partly due to the occasional line delivery, sometimes becomes it  comes across as too intense or, in other instances, lacks punch. Whether this is intentional or not remains open to debate, but as a performance, it is far more amateurish than that of his co-star, which brings some of the scenes boiling with potential down a notch or two. Not all of the jokes land, either, which might seem too easy a complaint to aim at a comedy, for few comedies are uprorious from start to finish, but in the example of Mon Ami, it is not because the setups and punch lines are too opaque or offbeat to the point where few would comprehend them, but rather the opposite: they are too easy. Having Teddy or Callum getting ready to deliver the fatal blow to their helpless captive only for a cell phone ring or any other trivial matter interrupting their momentum can be funny once (although that sort of joke has been told many times, albeit with different set ups), but to have that transpire multiple tmes kills the joke quickly.

There are plenty of little quirks and idiosyncracies that give Mon Ami a special identity, and for that the filmmakers efforts should be applauded. This is by no means a big budget spectacular, but some of the slow motion shots are exquisitely captured, replete with fun details in the picture, making it look quite posh. The score is another of the film’s wonderful little surprises. There is no modern rock, classic rock, rap music or even an original score. Instead, director Grant opts for classical music. Not only do the pieces function as the film’s music as non-diagetic sound, but it also happens to be the musical genre the protgonist actually enjoy the most, playing instantly recognizable masterpieces in the living room or while driving to the hardware store for rope, knives, axes, all the requisite material one needs to perform a proper kidnapping and murder. It’s quite zen, really.

Rob Grant’s picture is a comedy with some serious bite. It might not earn top marks in every department, but this is a case where one would not only give a solid score due to the effort, but because, by and large, the film is genuinely good. It is not afraid to challenge viewers and their sense of comedy, nor does it hold back from embracing the inherent flamboyancy and zaniness of the concept. Mon Ami makes an unorthodox case for how to keep one’s friends, but it should make for a neat movie night with them at least.