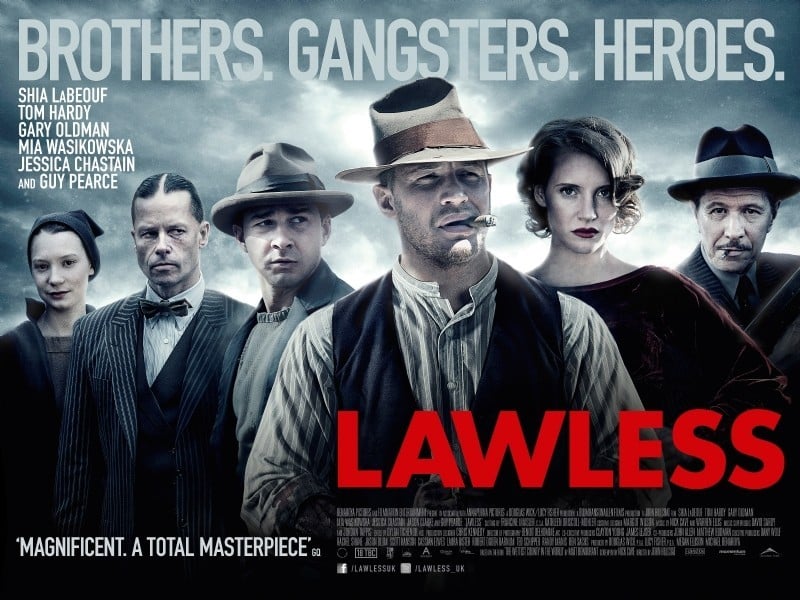 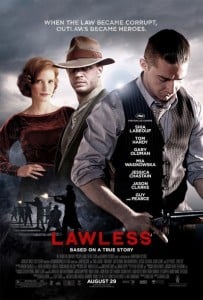 Director John Hillcoat and musician Nick Cave have collaborated numerous times since the late 1980s, from Cave having starred in Ghosts… of the Civil Dead to composing Hillcoat’s adaptation of Cormac McCarthy’s The Road. Lawless marks their second collaboration involving Cave as screenwriter, following The Proposition. That outback-set western was a film of strong lyricism and a blistering atmosphere. Like The Proposition, Lawless concerns three brothers with ties to crime and extreme violence. Unlike the 2005 film, Hillcoat’s latest is an unusually flat affair and lacking in any of the director’s usually reliable boldness regarding harsh, brutal content.

Adapted from Matt Bondurant’s novel The Wettest County in the World, Lawless concerns the Bondurant brothers in the Prohibition era, who set up a racket running moonshine out of the Virginia mountains. While their fellow bootleggers pay the necessary bribes to keep federal enforcement away, the brothers do no such thing, meaning they have no protection when a Chicago special agent, with a fondness for violent tactics outside of the law, arrives to eradicate the various brewing and selling operations. Guy Pearce, another Hillcoat veteran and star of The Proposition, is the agent, while Shia LaBeouf, Tom Hardy and Jason Clarke play the Bondurant brothers. LaBeouf is the runt of the pack out to prove himself, Clarke the enforcer of the trio, and Hardy the seemingly indestructible leader prone to having myths spun about him. In addition to these four, there’s Jessica Chastain as a beautiful barmaid with a mysterious past, and Mia Wasikowska as a seemingly pure preacher’s daughter that LaBeouf’s Jack falls for.

Most of these characters may seem archetypal, which wouldn’t be a problem if they were delivered in an interesting, compelling way, but the main problem of Lawless is that it all feels so hopelessly generic, going through genre motions without a hint of spark to it. As a result, the film, despite its heavy machismo brooding combined with brutality, just feels lifeless. Performance-wise, Pearce has some enjoyable moments in a wildly hammy part, while LaBeouf, Clarke and Chastain all deliver decent if never especially engaging turns. Gary Oldman is also perfectly fine as a woefully underused character that amounts to a barely extended cameo; his third place billing in the cast list is certainly peculiar. Wasikowska, her character being a non-entity, has nothing to do but glow a bit, while Tom Hardy is strangely poor as Forrest Bondurant, in a mumbling-heavy turn that doesn’t so much suggest subtlety behind a resistant facade but a reliance on an ill-advised form of delivery that is sometimes unintentionally humorous. He’s effectively the co-lead with LaBeouf, but he’s a tedious character to follow; his undercooked relationship with Chastain’s barmaid also harbours a scene that really does feel like a gratuitous excuse to get the actress topless. The surprising highlight in regards to the actors is actually Chronicle star Dane DeHaan, sympathetic as Jack’s friend and possessing the only real consistent charm throughout.

As suggested earlier, Hillcoat is usually reliable for striking visual flair, but here sticks to an unobtrusive style that may have worked fine if the narrative and characters were compelling enough on their own; blame can partially be attributed to the neutered colours of the director’s first meddling with digital shooting. With Cave’s screenplay surprisingly lacking in any bite, free of any of his music and other writing’s vivid darkness, the atmosphere of the film just ends up bland and flat. Cave also scored the film, alongside Warren Ellis, and while it’s certainly not the most memorable soundtrack effort of theirs, occasional electric guitar leanings at least inject the occasional bit of life into the film. Less successful is the film’s over-reliance on songs, some anachronistic like covers of The Velvet Underground’s “White Light/White Heat”, which quickly become a grating, obtrusive presence as they pop up in practically every other scene. The one positive about those songs is that some of them are at least occasionally inspired, unlike the frustratingly banal film in which they preside.