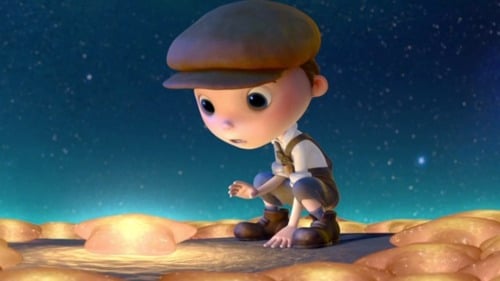 Written and Directed by Enrico Casarosa

Listen to our Mousterpiece Cinema Brave (and La Luna) podcast or read Josh‘s review of Brave.

The Oscar nominated short La Luna has already made the festival circuit, but being featured in front of Brave gives this Pixar short an audience several magnitudes larger than it (or most short films) had before. It deserves to be seen.

La Luna is a fantastic and economical short film about the difference between communication and language, as well as the difficulty of choosing how to walk the minefield of emulating your heroes versus imitating them. Since these are also the themes of Brave, the short film and feature are perfect matches for one another.

Despite being the longest Pixar short paired with a feature to date, La Luna makes good use of its time. As a quick example, we learn in the opening seconds of the film that La Luna is the name both of the short film and of the boat where three generations – of what we initially assume are fisherman – work. As it turns out, saying that La Luna is their workplace is true on multiple levels. The young hero of La Luna (Bambino “voiced” by Krista Sheffler) is being introduced into the family business, which includes being presented with a work uniform – his cap – and his work tools. Our hero finds himself being forced to choose between how his father (Papà “voiced” by Tony Fucile) does things and how his grandfather (Nonna “voiced” by Phil Sheridan) does them; this choice symbolized both by how his father and grandfather wear their caps and what tools they use in the family business.

When the three generations face a sudden obstacle in their work, the two older “lunatics” break into squabbling in an oddly Italian inflected variation of Charlie Brown adult drone gibberish. (Using language rather than communicating.) At which point, our young hero grabs his cap and forcefully chooses a new way of wearing it that apes neither his father’s nor his grandfather’s style. It is simultaneously a declaration of independence and following in their footsteps. Bambino is still wearing a cap and using tools, following their example, he is just doing it in a style (and with a success) all his own.

It is perhaps a bit insane to suggest that La Luna, the short film that precedes Brave, is worth the price of admission by itself and maybe only someone who ran a festival for short films would say it. It would also be true. Don’t be late for your screening of Brave. You might miss the best part.