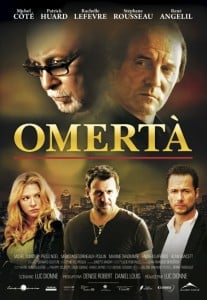 The Québec film industry is often lauded for the exuberant creativity and artistic merit of many films it produces each and every year. Every so often though, a little bit more money is invested in a project, one that, much like its Hollywood counterparts, hopes achieve success beyond critical acclaim. Cast some familiar stars, write a reasonably easy script for the masses to understand and appreciate, and hopefully the endeavour shall reap box office benefits in addition to the much desired warm public and critical reception. The Rocket (2005) was one such film, as were the summer hits Bond Cop, Bad Cop (2006) and De Père en flic (Father and Guns, 2009). The summer of 2012 brings back an important title that should be very familiar to Québec television fans: Omertà, which was a Sopranos-like cop and mobsters drama which aired from 1996 to 1999. Creator Luc Dionne and star Michel Côté return to the foray, but the majority of the cast, while popular names, are new to the world of Omertà, interpreting brand new characters.

Pierre Gauthier (Michel Côté), a seasoned, hard nosed investigator if there ever was one, has left the force since the show’s end, now under the employment of a sophisticated security agency. He is currently tasked with following the happenings of a chick Italian restaurant in Montreal, managed by one Steve Bélanger (Patrick Huard), who himself is reported to have links with the local mafia, headed by the enigmatic, extremely private Dominic Fagazi (René Angelil, who, for those not privy to such info, is world icon Céline Dion’s manager and husband), with a recently released murderer, Sam Cohen (Stéphane Rousseau), tagging along in some nebulous way as well. Pierre’s mission grows increasingly complicated when the provincial officials, in the form of the Sûreté du Québec, reveal that they have been poking their noses in the the mafia restaurant cover up too, sending in one of their own, Sophie (Rachelle Lefevre). An even more infuriating revelation comes when Pierre learns that Steve, believed to be a member of the mafia, is in fact a mole working for the police. As evidence begins to pile up regarding the smuggling of fake gold bullion, the tension mounts amongst those fighting the good fight, but how much tension can exist without it thwarting their undercover operation? ‘The main issue of dispute is that the quality of the picture is a story about two halves, one being far superior to the other in almost every measure.’

Any of those who may be attracted to the film’s marketing and therefore are tempted to pay the admission price to see the picture, yet are holding back out of fear of not fully comprehending what the film is about due to lack of familiarity with the original television series should rest assured. As previously stated, so many characters in this 2012 cinematic Omertà are introduced for the first time that Luc Dionne’s project may be viewed as a loose continuation of the adventures of Pierre Gauthier from over a decade ago, much less a direct sequel heavily influenced by the previous stories. So far as prior knowledge about the world of Luc Dionne’s Omertà is concerned, anybody can walk into the film and feel just as comfortable as those who were, and still are, avid fans of the original series. The main issue of dispute is that the quality of the picture is a story about two halves, one being far superior to the other in almost every measure.

All too often films are decried for providing strong starts, only to sputter out by the final stretches. Omertà offers a different experience, although no less an uneven one, in that the story’s first half is a bit of a slog to get through, whereas the second half provides a great amount of compelling characters interactions and enough tension to cause one to wonder what took director Dionne so long to get things moving along so efficiently. The problem lies in the setup, wherein the film must slowly introduce viewers to a great many characters, not all of which earn the screen time necessary for the audience to emotionally invest itself. The truth of the matter is that the first hour is very much concerned with the tension which can arise when two differing security institutions butt heads over a single case. How many times have viewers watched and re-watched movies in which cops, detectives or lieutenants have brazenly bickered about matters related to jurisdiction or the blatant unwillingness to cooperate with another section, even though if they all got along, then things would understandably move along much quicker efficiently. Pierre Gauthier unsurprisingly makes his discontent known when the Sûreté du Québec its head, with Steve Bélanger equalling the former’s level of frustration when having to handle not only his duties as a mole, but make sure Sophie is not in over her pretty little head. This portion of the film is agonizingly tepid in its storytelling, treading familiar ground and adding nothing provocative in the process, indicative of how the filmmakers probably are not terribly interested in the more common investigative measures, but rather the more character focused dramas which erupts later on. ‘… Michel Côté and Patrick Huard, both major icons of the province’s pop cultural scene, are allowed to shine, and their tête à tête… is quite fun to watch.’

Spoilers shall be avoided, naturally, but suffice to say that Patrick Huard’s Steve Bélanger, suddenly in over his own head, is eventually forced to arrive at a controversial decision which sends the investigation into something of a tailspin. From that point onward, a well acted, amusingly written game of wits erupts between himself and Pierre Gauthier, whose doubts surrounding Steve’s true allegiances practically drive him away from the original focus of the mission, what the Italian mafia and Sam Cohen are up to, and more towards proving what he assumes are Steve’s ulterior, less than honest motives. This is where the two principle cast members, Michel Côté and Patrick Huard, both major icons of the province’s pop cultural scene, are allowed to shine, and their tête à tête, so to speak, is quite fun to watch. The unwilling victim of this pleasurable character piece is the mafia’s role in the story, the weight of which is not nearly as significant by the film’s conclusion. If such is the case, why was so much time allotted to investigating them in the first place? Why not simply use them as a backdrop for a story about internal strife within the camp of the protagonists?

Even if the plot leaves much to be desired despite a stronger second half, the greatest issue plaguing the picture is the cast and the portrayal of the supporting characters. No one is particularly bad, but other than Côté and Huard, no one stands out either. Director Dionne seems intent on making Sophie, played by Rachelle Lefevre, an important player, yet her only discernible trait is that she is an anglophone and therefore cusses mostly in English rather than in French. A pretty face behaving like a very, very tough cookie with whom no man should mess with. How original. Stéphane Rousseau, unquestionably a charismatic personality, is woefully miscast as what Pierre Gauthier describes at one point as a clearly a psycho, something that never felt. In fact, as the story shifts its interest away from the mafia and more towards the Gauthier-Bélanger rivalry, the film loses all need for the character of Sam Cohen, barely using him at all during the final 30 to 40 minutes and ending the character’s subplot in shockingly thankless manner, as though by then Luc Dionne himself had realized Rousseau was not the man for the job. The oddest bit of casting is René Angelil, who, on the few occasions he is even on screen (despite his face and name gracing the theatrical posters), hushes his lines rather than speaks them. The idea is clear enough: he is playing the typical silent but highly influential crime boss type. A neat idea, although René Angelil does not possess the gravitas the script seems to believe the character of Dominic Fagazi projects. Sometimes the ‘big budget’ Québec films pay off handsomely in entertainment value, as was the case with Bon Cop, Bad Cop, while other times they leave the viewer underwhelmed. Omertà, however brilliantly it markets itself (the trailer, which played in front of a lot of films in the spring and early summer, was amazing), falls in the latter category. It feels too long by virtue of an uninspired first segment which eats up far more running time than ever should have been allowed, and, other than the two major leads, most of the cast is mediocre.