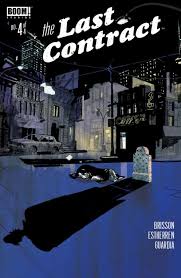 Written and Lettered by Ed Brisson

The Last Contract is ultimately the story of a man, a nameless hitman, who represents, in a Sisyphus-like manner, someone who cannot escape the world and activities they have been cursed to repeat. Even after retirement and an attempt at making a life for himself, The Man has found himself in the middle of a heated scenario. The only way it seems for individuals like The Man to stop rolling their respective boulder is through death. The ominously drawn cover by Lisandro Estherren, of Harv lying down next to a grave whose shadow is that of The Man, sets the tone for this final issue.

Ed Brisson continues the liveliness of this mini-series through a tense and violent climax in the warehouse that Burrell is keeping Dillon. All the separate roads left open in the final pages of the last issue veer towards the same final destination. Beginning where it all started, with the evening Toronto skyline in the background, The Man gives himself to Burrell, hoping that the innocent Dillon will be spared in exchange for the grizzled, experienced hitman. As much as the stakes are amplified, Brisson still has room for humour even when The Man is under duress and completes the series with some emotional moments as well upon the last few pages. 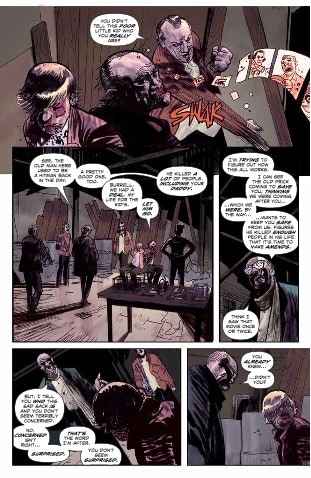 Lisandro Estherren illustrates some claustrophobic sequences within the warehouse with some stark shadow work. Estherren amplifies some of the action and violence by choosing to focus on foregrounded characters without any background detail from time to time. His rough pencil work has paired really well with the world in which this story takes place, capturing the dirty environments and weathered characters. The tension and anger felt from characters like Burrell as he spews out desperate commands is amplified by the colouring work of Niko Guardia. Guardia uses blotches of reds to match the blood pressure of Burrell in the tight frames of his face and for moments of unexpected violence. The beauty and sorrow in the softer colours of the night sky are nowhere to be found in the dense, tight quarters in the climactic factory sequence.

See also  One mystery leads to another in 'Goldie Vance' #1

The creative team of The Last Contract has put together a well-rounded story of a tired character type in the crime genre that confronts questions of regret, identity, morals, and dealing with a fixed way of life. Having the main character remain nameless adds to the sort of tragic life that The Man is living. Without a name, he is further recognized as a tool used in the game of organized crime. However, this doesn’t take the humanity and emotions out of this character, even after committing crimes and deeds that even he questions as impure and immoral. Even though the series is a short, four-issue bunch, The Last Contract succeeds in painting the portrait of a man who fights with the ghosts of his past whom channels a fate he must confront and not turn away from.