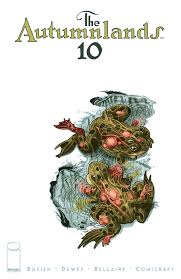 Lettering and design by Comicraft

For the past three issues of The Autumnlands, Dusty and Steve Learoyd have hiked across the mountains, seeking a way back to the Floating Cities. On their way, they were ambushed by goat men, taken in by sheep people, and agreed to find out the mysterious source of light atop the tallest mountain that plagues the land with poisonous water. In this issue, they see firsthand the negative effects of the water on wild life, meet a new comrade, and possibly discover the source of the light only to have it blow up in their faces. Basically, just an average day for them.

The cover for this issue is a simple yet intriguing design. No doubt, the disfigured, sore-covered frogs are morbidly fascinating, but also the water beneath them. With the white background, it’s almost like the holes in a frozen lake. There’s natural rippling effects and reflections in the water. It’s impressive how Dewey and Bellaire add even the tiniest of detail to such a simple image. It attests to how they put 100% effort into the gorgeous art of this series.

As always, Dewey and Bellaire are an outstanding duo. They create a highly detailed world full of dazzling colors and unique characters. What will no doubt stand out in this issue are the mutated animals. The effects of the poisoned water causes them to grow unnatural sizes, develop extra appendages, and spore red sores all over their bodies. They’re a horrid sight to behold, yet they’re also colorful. It takes skill to make mutants grotesquely beautiful, and the art team pulls it off here.

Another impressive design is the woman on the mountain. She’s made of stone and dressed in stylized clothing, a person of power. She is a unique cross between a Greek goddess and Buddhist monk. Not much is known of her except that she glows, and glowing causes her skin to crack and turn red. She’s an amazing looking character, and readers will be intrigued by her without even knowing her name.

Finally, there is an explosion of epic design, and the destruction it causes is just as impressive. It’s probably the most action-packed scene in this story arc, and readers that have felt the story has gone at a slower pace will no doubt enjoy it.

In this issue, Dusty starts showing signs of maturity. He’s getting better at magic, and he’s starting to assert himself. He even puts his foot down in an argument with Learoyd. To his credit, Learoyd expresses approval of Dusty. In an earlier issue, he told Dusty that the first thing that he’ll have to learn in order to survive is be a man that makes his own decisions. It seems as though Dusty’s doing just that.

Learoyd being an encouraging mentor sheds a positive light on him. While regularly harsh, he is friendly and protective of Dusty, like a father with his son (or, in this case, a master and his dog). However, Learoyd’s selfish side also shows. He only agrees to help a sick goat man because he thinks it’ll benefit them. Also, the weird crows show up again, and he hates them calling him “Liberator” to the point of throwing rocks at them. It indicates how Learoyd doesn’t care about the fate of the Autumnlands and only wants out. Seeing these two sides of him make Learoyd an infuriating and intriguing antihero.

This issue introduces a new character, Dirty Aelbert, a goat man. Not too much is known about him except he’s trying to figure out what is up with the water, but first impressions make him a happy-go-lucky yet serious rogue. It’ll be interesting to see him develop in the proceeding chapters.

As much praise as the story has gotten, there are issues. Mostly, the sudden abruptness of action feels a bit like backlash given that the previous issues, despite their action sequences, were slow-paced. Most of this arc has been about discovery and world development, and to go from that to nuclear explosions messes up the pace a bit.

Also, some plot holes come up. First, Learoyd points out how the water has mutated the wildlife, which means most things there aren’t safe to eat, despite the fact he’s holding an armful of vegetables. This does get fixed when Learoyd commands Dusty to purify everything with spells. Second, when discussing Yumanbeins, Learoyd makes a crack at elections. Aside from those who might find the joke tacky, it also raises questions about Learoyd’s amnesia. How would he remember this while forgetting so much else? It’s not very clear what he does and doesn’t remember. Speaking of Yumanbeins, it’s easy to forget this term from the previous issue. It’s not a big deal, one just has to reread the previous issue.

The concept of Yumanbeins comes up for more world development, particularly how there can exist both talking wizard animals and regular animals, which opens up a whole new level of the power structures that dominate the world. Hopefully, this will be fully explored in upcoming issues.

Despite it’s pacing issues and plot holes, The Autumnlands #10 is yet another satisfying entry in the epic series. It contains Dewey and Bellaire’s always amazing art; Kurt Busiek develops Dusty’s character, introduces a fun new character, and hints at big revelations on the way. Highly recommended for fans sword and sorcery, scifi, and talking animals.