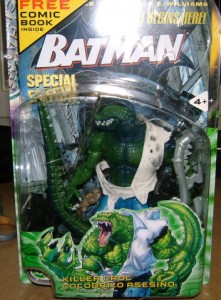 A leaked copy of the script for The Dark Knight Rises, the third and final Batman film from director Christopher Nolan, has found its way online. Before quickly being removed, Comic Book Movie managed to grab some of the details, which listed Dr. Hugo Strange, Killer Croc, Black Mask and Talia al Ghul as the main villains to appear in the film.

Here is what Comic Book Movie had to say:

“The female lead is Talia al Ghul. And Sarah Essen, and Bullock is in the film. Dr. Hugo Strange is the main villain, Black Mask replaces Salvatore Ramoni, and Black Mask recruits Killer Croc as the muscles to take down the bat, Killer Croc is known to be a psychopathic killer with a skin diseased reptile function skinned, who’s an expert in hand to hand combat and extremely agile. Oh and that’s not a lot of villains because everything ties in perfectly. Let me give you guys a slight summary of how the villains all fit together:

None of this has been confirmed by Warner Bros. but it is interesting that they were so quick to remove the script from the net. Back in 2008, The Dark Knight screenplay was said to have been the most sought after script of the year. The security on the set of The Dark Knight was so tight that apparently the only copies of the script were kept in a vault. Only five weeks into the release of the movie did the script make its way online. Based on that fact, I find it hard to believe that Nolan wouldn’t take the same precautions with his latest film but everything seems to indicate that it was indeed the real thing.