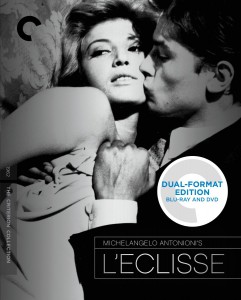 L’eclisse is the third film in Michelangelo Antonioni’s so-called “Trilogy of Alienation,” the preceding works having been L’avventura and La notte. (With justification, some would argue that Red Desert, his next film, truly rounds out what would then be considered a tetralogy). While the three films taken together do explore many of the same themes relating to spiritual emptiness, the disbanding of relationships, and a struggle to communicate in an increasingly modern and alienating world, L’eclisse differs from the two earlier works most notably in its increasingly experimental style and its blatant departures from conventional storytelling and formal design.

A tumultuous relationship begins L’eclisse, as we arrive in medias res, near the end of the rather unpleasantly crumbling relationship between Riccardo (Francisco Rabal) and Vittoria (Monica Vitti). Inside Riccardo’s claustrophobic home, Antonioni packs the frame in a remarkable fashion, with furniture, accessories, and pieces of miscellaneous bric-a-brac invading and protruding through nearly every corner of any given composition. Coupled with a deafening silence (“Many things can be said during silence,” Antonioni once said) and a stifling atmosphere (an oscillating fan stresses the suffocating warmth), this creates an intimately uncomfortable portrait of an affair in ruins, of things clearly having taken a turn for the worse. Vittoria fidgets around anxiously; Riccardo at times just sits and stares. While he is persistent in his attempts at reconciliation, there seems to be no hope. Whatever existed between these two has been sadly severed. 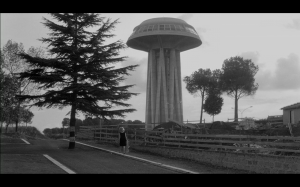 Isolation is a key theme in Antonioni’s work, highlighted frequently through the use of location. Here, after Vittoria leaves Riccardo’s home, she walks along the desolate streets. It’s early and there is barely anyone else around. In this setting, Vittoria’s solitude is underlined by her isolated figure placed in these sterile surroundings. This would stand in contrast to the next key location of the film, one unlike any other previously approached by Antonioni in his films to this point — the Italian stock exchange, where Piero (Alain Delon), who is soon to be Vittoria’s new love, works. This is a hectic, crowded, and noisy location, one of bustling energy that relates to, and feeds off of, the individuals who make up this trade; as they yell and bid and curse, one wonders if they are spurring on this confusion and chaos, or if it the other way around. Either way, this particular locale is quite revealing, not only as far as the characters are concerned, but here we also see Antonioni making a larger commentary on this specific venue as part of Italy as a whole. Men and women shout over each other and violence is primed to erupt at any moment. There is much at stake here, and the attempts to make deals and sell and buy stocks are complicated by all the noise. The earlier silence between Riccardo and Vittoria, which makes their dialogue strained, is paralleled here where the raucousness makes attempts at communication also a struggle. This exchange of currency and property seems utterly uncivilized, yet modern civilization as these people know it is heavily dependent on what goes on in this site. It’s a kind of post-war, consumerist, capitalistic paradox, where big business and stock traders are made to appear unscrupulous and overly aggressive, but are, in many ways, what makes the whole thing move. In a strategy at this point rare in his career, Antonioni is using the market location as instigation for a larger societal critique. When Piero and his associates observe a moment of silence to remember a recently deceased colleague, the anxiety of missing out on potential money earned is excruciating. “One minute here costs billions,” Piero tells Vittoria.

L’eclisse would go on to make use of a location only existing in photographs to further comment on the personal struggles of these characters in their contemporary existence. Following the break up with Riccardo, Vittoria later that evening finds herself in the home of a neighbor, essentially a stranger. There, she marvels at the pictures and artifacts taken from this neighbor’s time spent in Africa. Though never actually in this geographic location, the way the images of the exotic land work on Vittoria’s psyche is nevertheless revealing. She loosens up and becomes uninhibited, going so far as to don blackface, wear a robe, and yell and hop around in the apparent fashion of an “African savage.” What may seem like blatant racism now (and the neighbor seems to view the behavior as disrespectful at the very least), in the film it signals a change in behavior and mentality that Vittoria otherwise never finds the motivation for. The pictures of the African landscapes inform considerably, even if briefly, a retreat from her suffocating, banal, and, to her, difficult way of life. Kenya represents freedom, an escape from modernity, a less difficult place where “things just unfold on their own.”

In another example of an alternate environment playing a part in character development, a major location for Piero also reveals a perhaps latent desire for a return to a simpler existence, here a return to the past. Despite his role in an ever enveloping and evolving contemporary lifestyle, Piero lives in a house populated by antiques. Though he is in no way old fashioned, and actually seems to revel in modern times with the emphasis on prosperity, speed, and progress, these relics surrounding him in this domestic setting hint at a man who once was, or still is, a product of a totally different life than what he is leading.

Taking these two locations together, they both demonstrate why Piero and Vittoria may indeed make a suitable couple — neither are seemingly content with where they are in life or in setting; both maybe even feel more at home, literally and figuratively, in spaces not inundated by the complexities, falsities, and artificialities of a modern reality. If they are a good match, however, then how does one explain the film’s famous final sequence, which amounts to, as Seymour Chatman has described it, “a kind of disestablishing shot”? 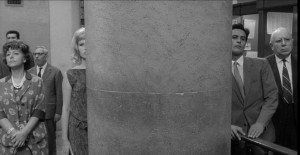 Having agreed to meet later one evening, neither character shows, and Antonioni’s camera is left to comb the area and its animate and inanimate occupiers. A sequence lasting nearly seven minutes provides one of Antonioni’s most stunning moments of landscape examination and ambiguous narrative provocation. Abstract compositions of spatial elements — people, buildings, trees, debris, etc. — give a sense of disturbing estrangement. We see people waiting, watching, walking … but waiting for what, watching what, walking where? It’s an aimless, dreamy, even haunting montage of incongruous features. In Elements of Landscape, a short documentary featured on the Criterion Collection disc, critic Adriano Aprà likens L’eclisse to a science fiction film, particularly with its odd, ultramodern architecture, and at one point, Piero states that he feels like he’s in a foreign country. Throughout the entire film, there is a strong feeling of strangeness, but never more so than in this final sequence. The evocative imagery and Giovanni Fusco’s tremendously effective ambient score suggests an alarming finality, but to what? A newspaper headline mentions the nuclear arms race. A possible clue? Antonioni’s compositions in and of themselves are normal enough (stunningly shot though — Aprà calls the filmmaker a “photographer/director”), but taken together like they are here, and juxtaposed in their content and form, the result is quite unsettling.

And what of Piero and Vittoria? Why are they together prior to this, and where are they now? It’s clear when they first meet that there is an attraction (it’s Monica Vitti and Alain Delon, how could there not be attraction?), but their initial attempts at physical affection are awkward at best. This improves some as the film goes on, but there is never a hint of true devotion. Vittoria says at one point she wishes she didn’t love him, but then she wonders if she wishes she loved him more. Their union is half-hearted from the start. Neither is reliant on the other for security, nor are they necessarily looking for commitment. Unexpressed ambivalence is not unusual for Antonioni’s couples, but the way their relationship concludes here, at least as far as what we actually see in the film, is an innovative approach. By agreeing on the meeting time and location, and neither showing, we are at once not surprised (did they really care for each other anyway) and shocked (because we stay in the area, without them, for so long). 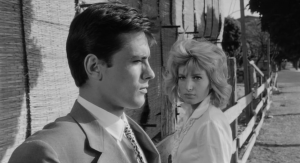 There has been debate about what exactly L’eclisse is referring to. There is no actual eclipse in the picture, so like Red Desert, which features nothing close to a desert, to say nothing of a red one, one has to assume that the title is illusory or metaphoric. In this case, it would seem that there is actually an eclipse of sorts, but it’s one of the landscape over the characters. The setting in this film has become so important that it now outweighs our protagonists. From Riccardo’s home to the stock exchange to the austere streets, Antonioni’s characters are never quite in a place where they seem fully at ease. And by the end, why haven’t Piero and Vittoria met? Where could they be? It’s ultimately inconsequential, because the surroundings have taken center stage. In Antonioni’s work to this point, going as far back as his first documentary, People of the Po, settings have told a great deal about their inhabitants. But now, it seems people are losing their relevance. This is just one facet of L’eclisse, a film that truly rewards, if not demands, multiple viewings. 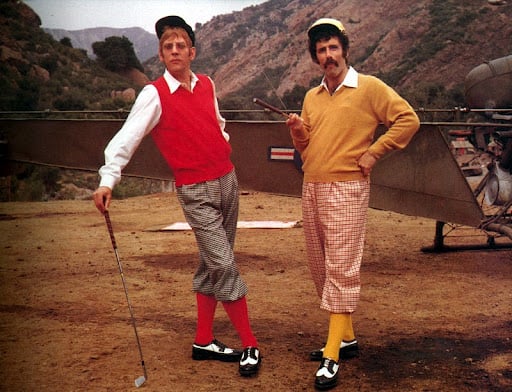