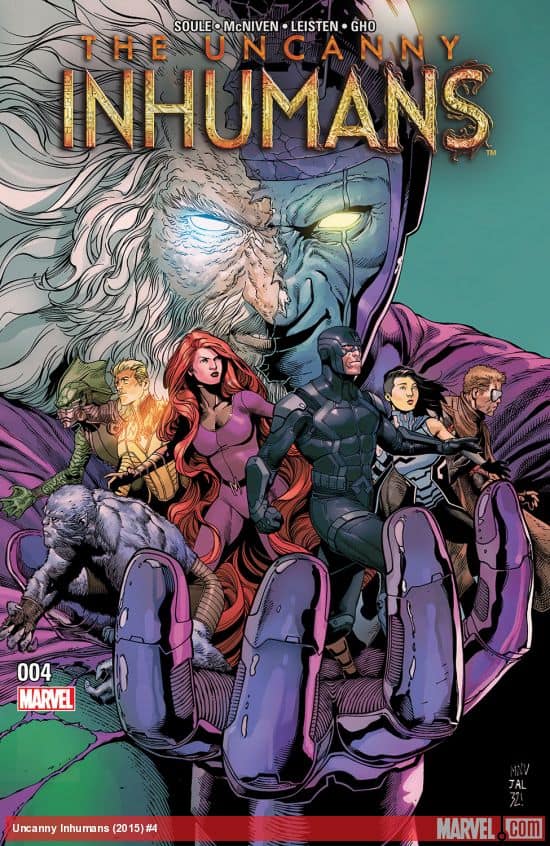 Time travel is a tricky mistress in Uncanny Inhumans #4. It’s even more tricky and complicated when you make deals with Time Warlords named Kang the Conqueror to get your family back together.

Uncanny Inhumans #4 is billed as the closer to the first arc starring the Inhuman royal family and friends, and they go out with several bangs, emotional beats, and leave the door open for more adventures of the Inhuman caliber to be told. We finally get the reveal of what happened during Kang’s escape with Ahura before Secret Wars happened in Uncanny Inhumans #0, and it’s a 13,000 year old doozy of a story. One thing, artists Steve McNiven and Jay Leisten and colorist Sunny Gho made sure of was the expert handling of how each character is rendered and colored. Everyone that has a part to play is displayed with all the ferocity, angst, and other emotions that Charles Soule calls upon for this larger than life story with personal family matters at its core.

In the midst of adventure, Soule forges ahead with a story that started because a father wanted to do right by his son and protect his son from the threats to come. With this in mind, showing readers some prominent figures in Inhuman lore makes the story more enticing  than past issues have because it creates a  mindset that these characters both old and new have countless stories just waiting to be told! The climax of the issue is when Kang discovers treachery, and a young Inhuman must make a choice about what the future means for him and his people. And while the story concludes nicely like a bow on a present…you can’t help but feel this chapter of Black Bolt, Medusa, and their son can’t be done with so swiftly. After fighting airplanes from a distant war, soldiers from a forgotten timeline, and nearly getting erased from history the entire cast has had a moment to shine in the four issue story. The next few issues seem to go for the quiet and character focused stories of the NuHumans, and Soule and the entire art team deserve it after this tale of family, time travel, and betrayal.

Altogether, Uncanny Inhumans #4 stands out among the wave of recently added Inhuman titles, and expectations have never been higher for the royal family’s flagship title.