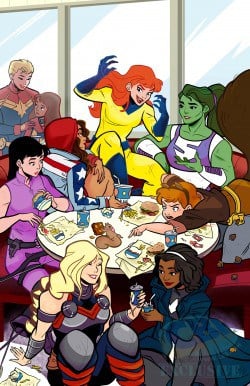 Comedy, the sharp, harsh reality of underemployment for twentysomethings in the 2010s, zippy action sequences, and best of all, super guest appearances populate the new issue of Patsy Walker AKA Hellcat #2. Writer Kate Leth and artist Brittney Williams craft the perfect marriage of the slice of life and superhero genres as Patsy struggles to fit at her new job at the Crop Top Shop while also finding out that her old friend/nemesis Hedy Wolfe is reviving the old Patsy Walker romance comics that she hoped stayed buried in the past. There’s also a fun chase sequence featuring a shoplifter with magical powers with a less than fun ending for Patsy’s employment prospects. Throughout the comic, Leth ties things together through the theme of evolving friendships as Patsy interacts with her new roommate Ian Soo (who might become a style icon of mine), her old friend Hedy, and her superpowered buddies showing how relationships shift and change in one’s twenties.

I can’t say enough nice things about the bright, but far from annoying color palette of Megan Wilson, who adds mood and feeling to Williams’ art. From the vomit of random colors that is the sales floor at Crop Top Shop to the dreary blues of the line of shoppers that reminded me of my Black Friday working experience the past three years and the soft red of Patsy’s hair that gets more intense when she’s angry, Wilson’s colors complement the expressions, speed lines, and background jokes of Williams’ art as well as the whip smart dialogue of Leth. (Well, Patsy forgets how to quip when she’s furious at Hedy, but she’ll definitely get her next time.) Blue also plays a key role in this issue showing up everywhere from Hellcat’s mask to the background when her magical foe escapes and finally Hedy Wolfe’s “means business” top that is the opposite of Patsy’s adorable cat sleeves. So far, it’s an important visual marker of the series after being used in the last issue to show Patsy’s fierceness as Hellcat and sadness about her past. 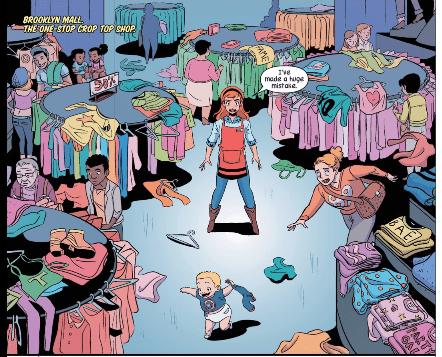 Kate Leth’s script for Hellcat #2 is really quite clever, especially the reason behind Patsy choosing retail of all jobs to do before her superhuman temp agency can find its footing. She chooses a job at the Crop Top Shop (This store name will never not be funny.) because they do less thorough background checks than other jobs, which works for her because Patsy has died and been to hell before. Explaining that could make a job interview really awkward. There is also a great line about kids reading comics again that could totally be Leth throwing shade on certain fans, who like to criticize comics that are geared to a younger audience or women or queer people, and also because every superhero comic has to look like Jim Lee’s work on Justice League. God forbid, characters wear outfits that could actually be cute or fashionable or be influenced by manga or animation. Leth and Williams also nail the emotional beats, like Patsy’s moment of fierce anger about Hedy reprinting the comics without her say-so and then inhaling, getting back to work, and joking around with Ian as she folds clothes. Her conversation with Hedy is dramatically tenser than your usual villain of the month fight even though Williams has action chops too using the mall as a kind of a jungle gym for Hellcat’s kicks and flips.

Kate Leth, Brittney Williams, and Megan Wilson capture the tortuous pain of working retail in Hellcat #2 while still delivering on the quips, art, and color front. They have truly created one of Marvel’s unique comics as Patsy doing superhero things while at work has real world consequences. Patsy goes through realistic experiences like having a hard day at work or dealing with a friend’s betrayal, but these experiences are framed in a fun, heightened way like having red flames in the background while she’s getting angry or have super cute emojis for the superheroes on her cellphone.

Hellcat #2 is cute, funny, painfully relatable, and even sets up possibly the raddest superhero team-up ever in the next issue.