The prestige releases of awards season and the high-gloss trashiness of summer blockbuster season have one thing in common: they both cause movie fans to ride a circle of hype after any given movie is released, with many films going from highly praised amongst audiences, to being the cause of a vocal backlash in the space of an opening weekend. No matter the amount of critical praise, time tends to be unkind to Oscar winners; once the subject of respect, recent winners like 2011’s The Artist and 2014’s Birdman are equal parts punching bags amongst many online film communities. No matter how unique they appeared upon first glance, taking home the Best Picture Oscar renders them nothing less than awards bait to certain people when viewed in retrospect.

This year, that criticism (that a film is mere “awards bait”, with no other purpose for existing) has intensified to a level that has led to the most unpredictable Oscar race in recent memory, with no clear frontrunner for the prize. Although it is unlikely to win, there is one nominee that not only hasn’t faced any backlash, but hasn’t come close to receiving even the slightest bit of critical damning: Mad Max Fury Road, the only nominee that can never fall victim of being described as mere “awards bait”. George Miller’s film has sustained an admirable level of hype since its May release- a rare critical darling of blockbuster season, sustaining enough vocal admirers to the midst of awards season, culminating in 10 Oscar nominations.

But whereas the other films nominated have been held up to some level of scrutiny, no matter how minor, Fury Road appears to be the film that must not be criticised; to suggest it is anything less than an action masterpiece is to fuel the endless scorn of internet fanboys. In the eight months since its debut in theatres worldwide, the only widely circulated criticism are the mixed reactions reported from its 2014 test screening that have been the subject of much mocking in retrospect.  Collider Editor-in Chief Steven Weintraub originally tweeted that “MAD MAX: FURY ROAD test screening was last night. Sorry to report, I didn’t hear good things”. Other readers who were at the same test screening sent Twitter reports that have become infamous (and since deleted in retrospect). 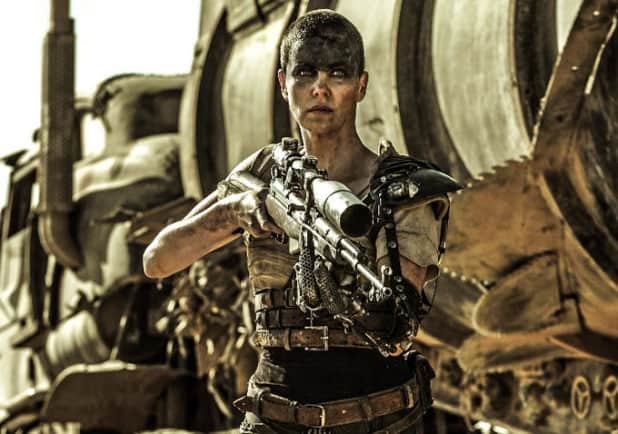 Most damningly, one attendee at the 2014 test screening complained: “Just saw a Mad Max advance screening. I can’t say much about it but let’s just hope they do tons of re-shoots before it’s released next year, or start again from scratch. Also Tom Hardy can’t stop doing the Bane voice. So annoying”. These claims can at least be held up to some scrutiny; Warner Bros. opted to test both PG-13 and R rated versions of the film for audiences on different occasions- however, it remains unclear which version these audience members saw. Coincidentally, if this was the R-rated version, no reshoots were made; the only reshoots were shot prior to any test screening.

But you would be hard-pressed to find any critical derision following the release of the film. On Metacritic, 46 of the 47 critical reviews that were aggregated were positive, with the other being a mixed review. That sole mixed review, from San Francisco Chronicle reviewer Mick LaSalle, described it merely as a “two-hour chase scene, one that seems founded on the assumption that if you show one set of people chasing another, that’s enough to get an audience excited”. Of course, his words will go down in history as proof in point that not only is that enough to get an audience excited, it is enough to make a film generate high praise at levels normally reserved for Citizen Kane (2022’s Sight and Sound poll could make for interesting reading). The only other negative review found in the mainstream press is from British tabloid The Daily Mirror, whose two star review is the sole knee-jerk reaction to the hype amongst mainstream critics, sharing LaSalle’s criticism of it being nothing more than a dull extended chase sequence.

Setting aside the personal indifference this writer has towards Fury Road, it still remains unfathomable as to how widespread the positivity the film has been greeted with was upon release and remains to this very day. At 120 minutes, it is the longest entry in the franchise, with the majority of that running time devoted to an endless array of action set pieces that should prove to cause fatigue due to their ceaseless repetition- only the sandstorm sequence offers a true differentiation of the endless “chase through the desert” formula. Furthermore, in this age of calling out “plot holes” in every single film, nobody dares to question a post-apocalyptic world with scarce quantities of fossil fuels wasting the majority of the fossil fuels in order to send an unnecessarily large quantity of vehicles to catch a single “war rig”. As awesome as a flame throwing guitarist is, it is a shameless waste of resources. Maybe it is the above adjective (“awesome”) that has caused the inner 14 year-old to re-emerge from inside the minds of audiences; George Miller has created a film that exists purely for the sake of being awesome, which in the Oscar-race, definitely stands out from films that exist purely to win awards. In this regard, the reasoning for a lack of backlash is obvious; amidst many serious films, Fury Road is a breath of fresh gasoline.

But the fact the movie is both “awesome” and a full-realisation of the apocalyptic fantasias Miller has been trying to create for four decades doesn’t mean the film is exempt from any level of scrutiny. Take the most widely praised thematic element for example: the feminism, with many arguing it may be the most mainstream film to be so deeply-ingrained into feminist issues. The only criticism this has received is utterly backward, as laughable men’s rights activists demanded a boycott against the film for the apparent crime of having a strong female lead; these same “activists” are presumably unaware that similar narrative occurrences happen in Miller’s preceding trilogy. The struggles of the female characters were praised by playwright Eve Ensler, who visited the Namibian set as an advisor, delivering talks to the cast and crew about the struggles of violence against women.

But although the feminist themes are there and deserve the high level of praise, the movie still should face feminist scrutiny. Take the portrayal of the wives Furiosa frees from Immortan Joe’s slave regime, where they were used as nothing more than “breeders”. On paper, this is a perfect allegory about women being able to make the choice to escape the tyranny of what society demands of them. In execution, it seems somewhat muddled. The wives are frequently portrayed by cinematographer John Seale’s camera in a highly sexualised way; the leery nature of a sequence where the rig stops at a watering hole undercuts any feminist virtues the film has elsewhere. 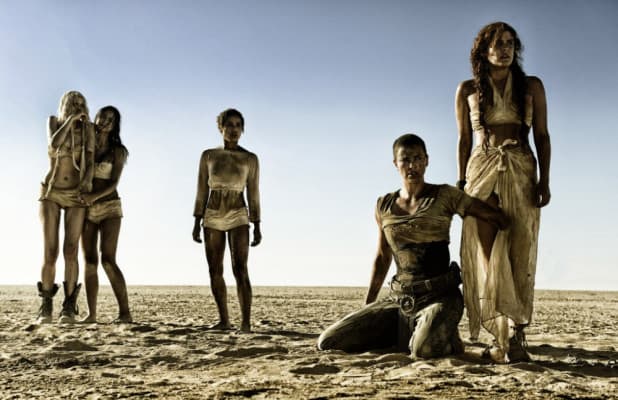 These are women escaping a lifetime of sexual violence, portrayed as nothing more than sexualised beings for the audience to gawp at. In a year when The Danish Girl, a fellow Best Costume Design nominee at the Academy Awards, has been criticised for equating femininity with clothing, why has Fury Road not received the same criticism? Even viewed objectively, its feminist virtues are sorely lacking from the moment the wives’ costumes (forced upon them from being sex slaves, no less) are introduced and continued to be depicted in a way designed to entertain the fantasies of teenage boys.

For a film praised for its feminism, this is unforgivable, a sequence that would be more expected in the highly misogynist oeuvre of Michael Bay. The fact that Furiosa is comparatively a “strong woman”, an action heroine who can still kick ass despite a life-altering disability, ensures she never becomes sexualised in the way the wives do. The sexualisation depicted makes the feminist themes seem like mere window dressing- in focusing on the feminism, which is muddled at best (if undoubtably stronger in the screenplay), audiences have ignored the biggest redeemer to the film’s virtues. This is the first blockbuster where a disabled character is portrayed as an action hero, something which is far more progressive than merely featuring strong women. This is why it is more of a call to arms for disabled viewers than female ones; there is never a moment when Furiosa’s disability is filmed in a leering way, that undercuts how strong she is in spite of it.

Even with the pretensions of thematic substance, Fury Road uses its strongest elements as disguises to hide the fact that it is style over substance in the most cartoonish manner. In the opening chase sequence, Max’s daughter appears directly in front of our eyes as a screaming hallucinatory vision; despite a $150 million budget and an extensive three year post-production process, this sequence still falls victim to having bad effects. The post-converted 3D may have been part of Miller’s directorial vision and not a studio compromise (he originally planned to film in 3D), but seeing a flame throwing guitar smash directly on to the retinas of the audience looks inarguably tacky. Minor criticisms regarding elements of SFX feel easy to give- a film that has been this intensely storyboarded for decades is clearly more focused on the visual style than the underlying emotions of the narrative.

Of course, Fury Road has deeper themes; but they are embedded in characters who remain thumbnail sketches instead of fully realised beings. They aren’t characters so much as being factors in the stylised landscape- the general indifference as to their narrative arcs makes it increasingly difficult to care about the stakes of the action set pieces, as imaginative as they may be. It is easy to see why action and genre-movie aficionados would be so enthralled by the form of the film (it is undiluted action at its most pure), but for the rare action film to cross-over to awards acceptance, taken at face value it is hard to decipher why it is so widely beloved outside of genre fans.

This article doesn’t intend to start a backlash against Fury Road– instead, it merely wants to start a dialogue as to why it is held in such a high regard when its faults are there to be seen, but seldom mentioned. After all, the art of a movie facing a “backlash” after its initial release is laughable and often infantile name-calling amongst competitive producers during awards season. But a backlash does open a dialogue debating the film’s relative merits. All works of art should be objective, inspiring varied subjective takes; it remains inexplicable that there is only one widespread subjective opinion of Fury Road, shared by a hive-mind of the Academy and movie audiences.