The closing moments of Manhattan‘s second season finale, “Jupiter,” are simply terrifying. A blinding white light obliterates the screen and then dissipates to reveal a crackling, howling mushroom cloud licking at the sky, the bone-chilling birth announcement of an evil genie forever burst from its bottle. We’ve known this moment was coming. We’ve known the testing of the bomb was inevitable. And, looking back at the last few episodes, we should have known that Fritz’s fate was inevitable, too. It feels like there is no other way this could’ve ended for him and yet the moment isn’t telegraphed until the final two minutes. It’s the soul-busting masterstroke of a masterful season that at once ties up all major storylines and plants intriguing plot and character seeds for a hypothetical third season.

This is a busy episode, but it doesn’t feel rushed. Last week’s “Brooklyn” hauled all the storylines up to the finish line, and viewers have known that the finale would revolve around the stormy night of the Trinity test since the premiere. But there is still impressive drama to be found in the variables. We knew Charlie would oversee the Trinity test, but his tiny healing chat with Helen was an unforeseen touch, as was his satisfying takedown of Colonel Darrow. Likewise, Oppenheimer’s role in the Trinity test is set in stone by plot and history, but him plucking Helen from obscurity to oversee the dropping of Little Boy on Japan is an unexpected throwback to his interest in her during “The Threshold.” Meanwhile, the logistics of the episode foretold that Liza and Frank would remain apart, but they enjoy a reconciliation of sorts as Liza learns about all the things Frank has done for her behind the scenes, including diverting funds to her research. And, finally, we knew that Paul upped his spy game last week, but his new skills twist the plot when he–knowing of Darrow’s propensity to lose his shit during interrogations–convinces Frank to try to flip Jim instead of handing him over to Darrow. This suddenly shifts the complexion of Jim’s long-foreshadowed interaction with the Gadget, as first Frank and then Fritz enter the tower with him.

Manhattan‘s first season finale ended with Frank confessing he was a spy for the greater good and, quite possibly, to alleviate the oppressive moral responsibility he felt for introducing an atomic bomb to the world. In “Jupiter” Frank again tries to impose his will on history, but having failed to stop the bomb, he goes small, reaching out to save Jim, knowing he can do nothing more to save thousands of people who are essentially walking piles of ash. At least, that’s what he seems to do. Frank always looks like he’s several moves ahead of everyone else in a game of chess, and when he sneaks up to the bomb tower to try to talk Jim out of sabotaging the bomb and killing himself, there are echos of his duplicitous conversations with Bucher back in “Fatherland.” This guy can manipulate anybody. But whatever questions there are regarding his always complex motivations, he goes all in when Fritz shows up to check on them. In an attempt to spare both Jim and Fritz, Frank again confesses to being a spy and sends Jim up as the hero. It all works. The situation is defused and the bomb is re-fused. They make it back to the blast shelter, and Fritz seems inclined to forget what Frank confessed. But then it all becomes too much for Jim. Whether it was Frank’s perceived selflessness or Fritz’s forgiving heart, it’s one variable too much. Jim cracks and tells Fritz that he’s the spy and that Jeannie got in the way. 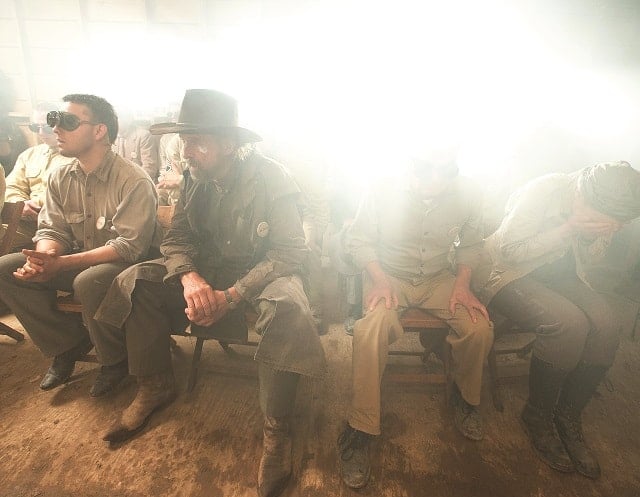 This whole season has been counting down to the inevitable explosion of the Gadget, but in the final moments, viewers watch the heart-rending implosion of a human being. Fritz goes to the car and gets Jim’s gun. He points it at Jim who accepts his fate by simply invoking the code of their friendship, “See you on Jupiter?” Then the demon is unleashed into the Los Alamos sky. Fritz turns to see mankind’s new beast, turns back to his corrupted friends, and changes his mind, doing the only thing that now makes sense: He puts the gun to his head and pulls the trigger as the ungodly monster hisses and moans in the background. It’s a devastating symphony of sight and sound that in seconds sums up two TV seasons and one of the biggest moments in history. Welcome to the dawn of the nuclear age, you pitiful bastards.

As of yet, WGN America has not renewed Manhattan for a third season. It’s hard to imagine they’ll let this show die on the vine, but if they do, we will lose one of the Top 10 shows on television (yes, that’s a big compliment in the age of peak TV, and I’m prepared to thumb wrestle over it). While it’s set 70 years in the past, it holds a mirror up to our contemporary, post-911 (and, presciently, our post-San Bernardino) soul-searching better than any series on TV, showing us that, very often, evil done for the greater good is just evil awaiting a new master. It’s like Jim says of his spying, “I thought I could control the variables. It just got away from me.” It always does. Fritz knew that.