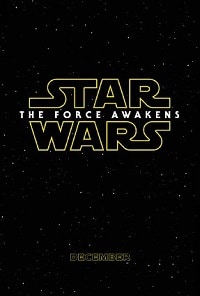 Star Wars: The Force Awakens is a welcome return to the franchise’s space opera roots. It’s a big schmaltzy mess, with a respectful eye turned toward the Star Wars canon. Though far from a perfect film, director J.J. Abrams has not only awakened The Force, but the hopes of disgruntled fans that have been waiting for a proper continuation of this beloved sci-fi saga.

George Lucas might have forgotten what made audiences love his Star Wars original trilogy, by J.J. Abrams was taking notes. The spirit and tone of those films has been lovingly restored, complete with old-fashioned dissolves and wipes, and an adorable robot that could be the spokesman for the 2018 World Cup. The Force and The Dark Side are well represented, with plenty of gravitas and ridiculousness to go around. It’s hard to imagine Abrams and his crew could have been more faithful to the films of their childhood.

From the ashes of the decimated Empire has risen a new evil called The First Order. Its leaders are the ethereal Supreme Leader Snoke (Andy Serkis) and his Darth Vader fanboy sidekick, Kylo Ren (Adam Driver). Together, they’re chasing a cute droid named BB-8 that has vital information on the whereabouts of a certain Luke Skywalker (Mark Hamill), who is living in self-imposed exile at the farthest reaches of the galaxy. Protecting BB-8 is a reformed Stormtrooper named Finn (John Boyega) and a scrappy scrap collector named Rey (Daisy Ridley). Joining them is the ace pilot, Poe Dameron (Oscar Isaac), along with a cast of familiar faces from the first three films. Together they must find Skywalker and save the galaxy from The First Order’s terrifying new weapon.

This is a broad sci-fi adventure on the grandest of scales. As you might expect, the action and spectacle have been turned up to 11, but it still manages to feel refreshingly small. That includes the character goals and motivations, as well. Many of the themes from Lucas’ original trilogy are re-visited, including honor, redemption, and self-doubt. Abrams doesn’t get lost in mythology or trade disputes; he keeps his characters out in front of all the preposterous action.

It’s ironic that the weakest portions of Star Wars: The Force Awakens involve the characters we most want to see. More specifically, Abrams and his co-screenwriters, Lawrence Kasdan and Michael Arndt, seem perplexed by an older Han Solo (Harrison Ford). They know his ultimate purpose, but can’t figure out if he’s a sage mentor or just the comic relief. His (re)introduction leads to the single most disappointing scene in the entire film, feeling every bit like a perfunctory action set piece that clashes with the carefully established tone.

Luckily, the new cast of characters is outstanding! Rey is a modern heroine who doesn’t need rescuing. She waits patiently on the planet Jakku for her family to return, foraging for rusty treasures in derelict Star Destroyers. Indeed, the starship junkyard is the film’s most inspired new landscape. Likewise, Finn is a breath of irreverently fresh air. His byplay with Rey is witty, genuine, and serves as the emotional core of the film. When the focus shifts from them to Solo and company, however, things feel decidedly less energetic. The feelings of nostalgia may leave you warm and fuzzy, but the seams are showing between the new story and the cherished past.

The most interesting new character is Ren, who brings a whole heap of turmoil and conflict to the table. Abrams and his writers take an interesting path with Ren. Rather than making him a fully-formed and terrifying adversary, we join his apprehensive transformation to The Dark Side. Instead of psychically crushing the windpipe of a hapless subordinate, Ren is more likely to strike down a piece of furniture with his flaming lightsaber. These temper tantrums hint at a petulant child in need of discipline, making Ren a fascinating paradox in this galaxy of otherwise straightforward archetypes. 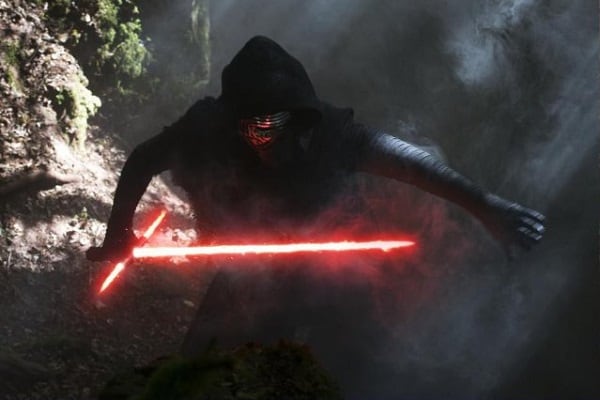 Technically, The Force Awakens is a breathtaking achievement. Like Lucas, Abrams shows a knack for painting in the corners. A desert landscape serves as the canvas for odd creatures lurking just out of frame, while scoundrels and con artists share a drink in a crowded saloon. The aerial dogfights look and sound amazing, with modern technology rendering classical starships in breathtaking detail. A surprising shortcoming is John Williams’ score. Your heart soars when the main themes kick in, but otherwise, this is a middling effort from the veteran composer that adds nothing to the mood or tone of the piece.

There can be no denying that Abrams has resuscitated this venerable franchise. Yes, it’s too long and the Supreme Leader Snoke is a complete bore, but it’s clear that new and exciting adventures are in our future. Star Wars: The Force Awakens won’t make anyone forget the original trilogy, but it beautifully restores the spirit that was lost in the second trilogy. The Force is back and it’s ready to have some fun.