I’m not normally a huge player of horror games (although I do enjoy games like Outlast from time to time), as I just don’t find them as appealing or varied as a good RPG or other styles of adventure games. There is no shortage of horror experiences in the games that are being created today, with a new zombie-filled post-apocalyptic world being introduced at seemingly every moment. The challenge for me comes in finding one that looks to show a different perspective on the genre, a new world to saturate with terror.

Enter Medusa’s Labyrinth, the new release from indie developer Guru Games. A passion project for the studio, the game was originally planned to be much longer and expansive. However, a lack of funding stopped the studio from being able to achieve their vision. Rather than simply trash the project, Guru decided to put together what they had and launch it as a free game on Steam.

Set in ancient Greece, you play as a man on Temple Island with no knowledge of what happened there or how you have come to arrive.The mythological, old world influence is present from your first moments on Temple Island. Everything from the style of the architecture, to the small details on the pots scattered around the landscape give nods to a past civilization. Guru really did a wonderful job of providing enough of these clues to frame the background of the island without making it cheesy or overdone; something that I think is all too easily done when dealing with ancient civilizations and their portrayals in media. 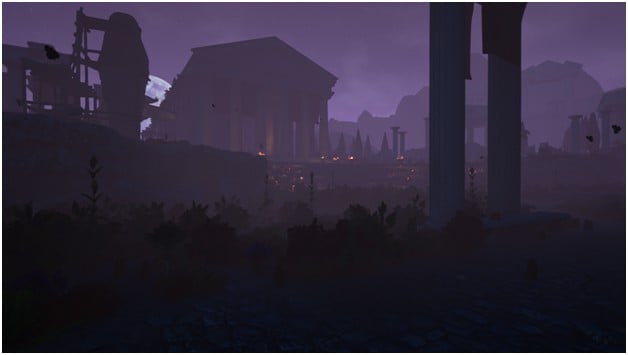 Despite the unfinished nature of the project, the visuals are stunning from the start, immediately inviting the player in to explore the island. Subtle moments with the lighting design really highlighted some of the smaller details of the environment and I found myself stopping and really taking in the world. Although many horror games are gorgeous now with the enhanced next-gen technology at developer’s fingertips, the genre wasn’t always known for that, and I appreciate Guru’s choice to make it a priority.

While it may be somewhat annoying to some that there was no explanation for the reason why your character is on this island, I actually enjoyed it. In games more focused on exploration, such as Gone Home, the mystery can be exactly what inspires the player to become invested and immersed into the world.

Medusa’s Labyrinth, even in its unfinished state, offers a great mix of story, puzzle, and fear in its short length (the game can be finished in anywhere between 30-60 minutes). Your only clues to the past events on Temple Island are found through journal entries left throughout the labyrinth by two characters, detailing a story of a young girl stolen from her family by a group of priests for reasons unknown. I will admit that I really wanted to find more of these entries or clues throughout the game, but for only being a snippet of what this game could have been, the amount that Guru was able to include is commendable. 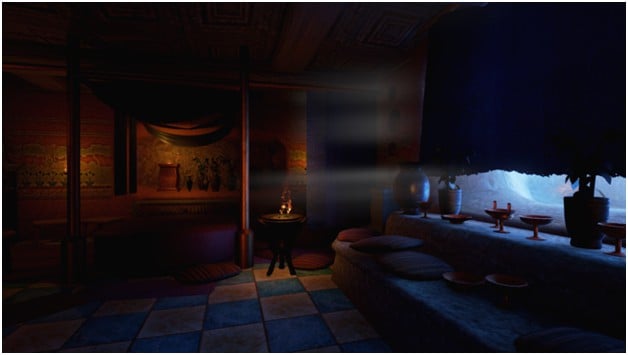 One minor complaint of mine was the odd way that Guru included puzzle elements. Although I’m sure this may be something that would have been cleared up had the game been able to be fully developed, one simple puzzle is introduced fairly early on. This was a really pleasant surprise, as I wasn’t expecting any of those elements out of what I thought was going to be a relatively straightforward horror game. However, after this first puzzle, there aren’t any more that you encounter through the entire game. Yes, there are clues as to the story plot, and you can do your best to piece those together to unlock some parts of the mystery of Temple Island, but as far as puzzles that require action, you are limited to one.

What really makes ‘Medusa’s Labyrinth’ a great game despite the lack of funding and full development is the subtle, terrifying ambiance present throughout. It’s not a game that’s in your face with a massive amount of jump scares or monsters to fight. However, what Guru does amazingly well is take full advantage of their choice of environment, allowing the player to become fully immersed. The idea of being trapped in an underground, dimly-lit maze of tunnels and passageways with no foreseeable way out is often enough to make most people squirm. Add in the subtle but effective sound design and haunting music and it’s a surefire formula for a memorable nightmare.

But Medusa’s Labyrinth doesn’t stop there. The only pieces of equipment at your disposal (when you can find them) are a torch and a bow. Even though you might think this would make you feel better in the tunnels, supplies are scarce and difficult to find in the shadow-filled pathways. I was able to gather a measly five arrows in my playthrough. Torches are limited as well, not only in number, but in the amount of time that they will burn before becoming useless. 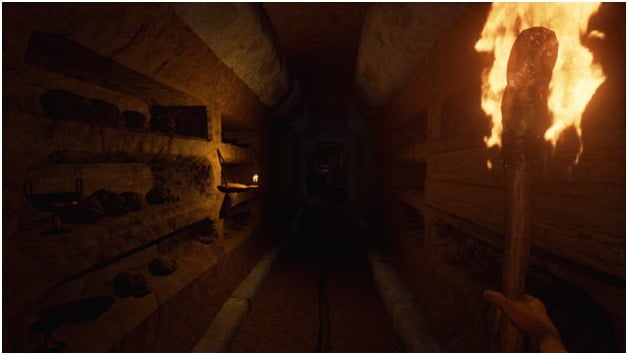 Because you can’t rely on having something on hand all the time, the sense of dread continues to grow around every corner, even when nothing really should be making you uneasy. This marks for me a true victory in a horror game. When the game feels like it has to really try to scare you, I tend to find them more lackluster and run-of-the-mill, falling short of expectations.

Although Guru really succeeded in a number of ways with this release, there were some problems that have to be chalked up to its incomplete nature. There were some glitches in the controls that could only be solved by closing and restarting the game, which was definitely an annoyance when I had to do it three times for a relatively short game. Some of the controls were only stated once and couldn’t be found anywhere else, making it somewhat of a challenge when I would have to break my playthrough to restart the game and continue on after a glitch.

However, even with some of these challenges, Medusa’s Labyrinth is a solid release, well worth an hour of your time. Guru Games did their best with what they were given by the community, and it absolutely shows. These are the types of games that should really be gaining more support: projects full of passion and heart with massive capabilities. Between the unique concept and attention to detail, Medusa’s Labyrinth is a perfect choice for everyone from the diehard horror fan to the more casual gamer.