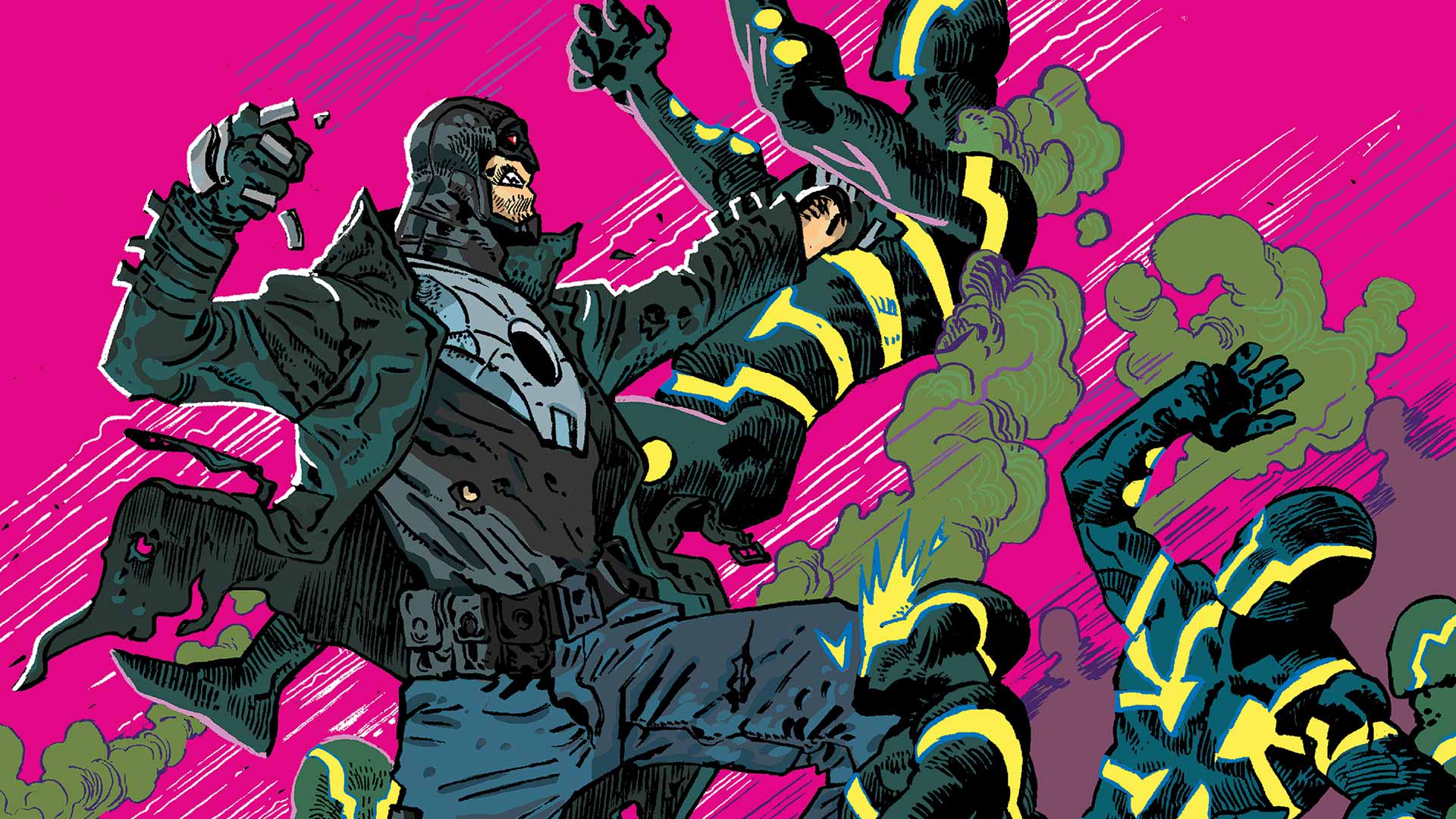 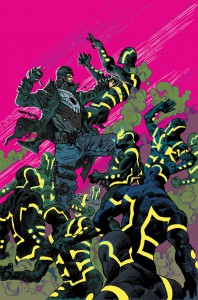 Aco returns in Midnighter #3, which really captures the way Midnighter’s computer for a brain work in an extremely non-linear plot. However, writer Steve Orlando weaves these time separated threads to tell a coherent story about Midnighter taking down members of an unknown organization that experiments on humans using the God Garden similar to the one that And there’s ample time for some flirting as Midnighter continues to date around along with bone crushing action and foggy glimpses into his past.

Like John Woo or The Wachowskis in their prime, Aco knows when to slow down the action for emphasis as Midnighter looks for clues to the whereabouts of a girl kidnapped by supervillain turned God Garden flunkie Multiplex. He also uses full page spreads to show the speed and ferocity of Midnighter as a fighter with flurries of blows and turning and bending inset panels that have become the hallmark of Aco’s Midnighter art. Colorist Romulo Fajardo uses an almost two tone palette of light blue and blood red to show how Midnighter’s thoughts become action in the heat of battle. Basically, Midnighter sees a bone and then breaks it. It is hard to follow who Midnighter is chatting (or chatting up) in a two page club scene, but for the most part, Aco, inker Hugo Petrus, and Fajardo’s art 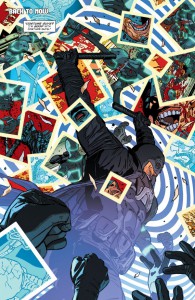 gives readers visual insight into how Midnighter processes the world around him in and out of costume.

But what keeps Midnighter #3 from being a straight up fight book is Orlando’s strong characterization of Midnighter  through both biting and occasionally bone dry one-liners along with some intense heart to heart conversations. Brain matter and blood definitely fly, but readers get to see Midnighter open up to a young girl, who was going to be experimented on just like he was at a young age. His tone is gentle and even lightly humorous as he tells her why he fights and doesn’t spoil the “midnight snack” waiting for Amanda at home.

There are also a pair of conversations in this issue where Orlando takes a stab at Midnighter’s place in the superhero genre as a whole. They are a flashback to his breakup with Apollo and a rooftop, post-coital talk with his new (hopefully not temporary) squeeze Matt, who he rescued and then clubbed with earlier. The club sequence showcases some pulse pounding colors from Fajardo and also continues to show Midnighter’s awkwardness in the whole dating/being single department in a pretty adorable way. Not all of us (even agile anti-heroes with computers in their heads) are cut out of for the dance floor.

The not dancing connects to Midnighter talking to Apollo about how he needs to find an identity as a gay man and person apart from Apollo and maybe apart from being someone who is just a fighter. This flashback dovetails nicely with the rooftop chat as Midnighter and Matt start to grow close physically and mentally, and Midnighter opens up about both his mission and feelings. Midnighter isn’t like Batman, who is the guardian of a city and a larger than life symbol that happens to be a grieving child at heart. His crime fighting is intensely connected to his identity as lab experiment, gay man, and protector of the weak around the world as he goes after everyone from Russian homophobes last issue to a human trafficking supervillain and even more enigmatic opponents.

Midnighter #3 has attention grabbing layouts and fight choreography from Aco, bold colors from Romulo Fajardo, and witty one-liners that leave both James Bond and John McClane in the dust from Steve Orlando. However, it’s the quiet moments between the mayhem that make Midnighter such a relatable character and set it apart from other superhero and action comics.