Directed by Cameron and Colin Cairnes

Written by Cameron and Colin Cairnes 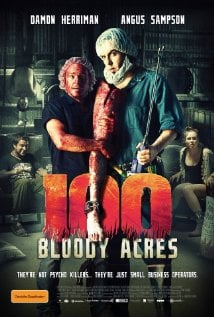 Tucker and Dale vs Evil subverted the Evil Hick subgenre of slasher films where others – led by Rob Zombie – were satisfied with mining ever deeper the mythology of the murderous, cretinous backwoods of middle America, the America of Ed Gein and Leatherface. Well, Australia has its own take on the city slicker/country bumkin divide and the results of such close encounters. Notwithstanding the lone backpacker slayers of the deep outback epitomised in Wolf Creek or the drunkenly sinister small-towners of Wake in Fright, rural Australia is more the province of down-to-earth living, mateship, hard drinking and primary industry. And perhaps a measure of family values.

Cameron and Colin Cairnes are two brothers who have made their feature debut about two brothers, Reg and Lindsay Morgan, the owners of what they repeatedly remind us is a legitimate small business. They manufacture blood and bone fertiliser, a fantastic source of nitrogen, phosphorus and potassium if you ask anyone versed in the art of gardening. The thing about the Morgan brothers’ product though is that it does not discriminate species-wise when it comes to obtaining the freshest raw material. Whether it be a car-battered roo freshly lifted from the warm bitumen and fed into a grotesque flesh grinder or the six victims of a particularly horrendous country road accident whose bodies were never found amidst the wreckage, the brothers’ blood and bone isn’t on its way to being the premier plant food money can buy just by sheer chance. This we learn in the film’s opening minutes when Reg comes upon a truck totalled against a tree on his way back to the Morgan workshed. Seeing that the bloodied victim is unresponsive and the coast is as clear as it often is in the Australian bush, Reg stows this godsend in the back of his truck and continues on his way until he comes across a trio of young…stranded…lascivious road-trippers…on their way to a music festival.

It’s not surprising that legions of film geeks raised on forgotten and underseen non-classics who eventually end up transitioning into the arena of feature filmmaking inaugurate their careers with forays into capital G genre. How many ways can the timeworn staples of the stranded-in-the-middle-of-nowhere slasher film be mixed and matched, subverted, converted and inverted, commented on, reinvented? Rather than straying into uncharted territory, genre provides a solid foundation upon which a filmmaker can build narrative, character, theme, and maybe – if they are lucky enough, talented enough, or both – they might push their chosen genre one step up its evolutionary ladder. But even in the absence of all this, genre cinema remains perhaps the greatest playground for a filmmaker on a technical level, whether the inspiration is Argento’s operatic virtuosity or the DIY magic of Sam Raimi. In the case of 100 Bloody Acres, the film succeeds almost purely on its basic cinematic competencies and the giddy conviction of those involved, the perverse novelty of its premise, and the clear love for filmmaking exhibited in the Cairnes’ simple but effective directing, which is more than can be said for a depressingly large number of films. In other words, it does nothing worth sitting up and taking notice at, and does nothing to set up the future of any genre, whether horror or something else. 100 Bloody Acres couldn’t even be accurately classified as a horror or even a horror-comedy. Despite a good few shock/schlock moments, it isn’t in the least bit scary, and there’s a good chance that fear was not the brothers Cairnes’ main objective, but rather, a laugh-out-loud, groan-out-loud, gasp-out-loud, gross out time at the movies. Reg Morgan (an immediately affable simpleton of sorts) is sympathetic if only because he is so laughably insecure and comes across as slow-witted to the point of seeming kind-hearted, which he ultimately is. He is the lesser of the two brothers, subservient to the steely-eyed and beastly Lindsay, who looks like an Amish man on steroids. Reg is eager to prove his worth to the partnership, to take initiative and stake his claim on the business, and he is no mood to give a lift to three city slickers. But when he is flagged down by Sophie (Anna McGahan), a gorgeous redhead who treats him with the kind-hearted ­­decency of the good ol’ country sheila she once was as a young girl, Reg thinks it a sound idea to stow her boyfriend James (Oliver Ackland) and his English mate Wesley (Jamie Kristian) in the back of the truck where the accident victim has been poorly hidden under sacks of manure, while she sits up front with him where he promptly falls for her. Then the friends go ahead and discover the body, forcing Reg to take that detour to Morgan HQ.

Whether or not the remainder of this plot is predictable will depend on how familiar one is with the tropes the brothers Cairnes are playfully exploiting here. Will there be blood and mayhem? Yes. Gore? In graphic detail. Sex? Not much, but enough for the film’s purposes. Incest? Of course. All of this, though, is handled with the kind of headlong offhandedness that the Coens do so well in a film like Burn after Reading.  Which is what makes Angus Sampson’s performance as Lindsay Morgan such a tickle of joy to behold. While the other actors knowingly betray their self-awareness at playing certain types, Lindsay is played without a wink, without a nod, but with comic conviction. In a way, he makes the film. The character of Reg may be a tad overthought by the Cairnes or overplayed by Damon Herriman, because rather than the string being ever present as is the case with McGahan’s ginger sexpot, or invisible as with Sampson’s performance, Reg’s scaffolding and underwires are present one second and gone the next, creating some tonal inconsistences that are ultimately not an undoing, but noticeable. James as the boyfriend, though, is annoyingly one-note, and there are moments as he hands over the meat grinder that I wished the damn thing would start and get it over with. He is the least interesting character of the bunch, less interesting even than Jamie Kristian’s English lad, whose shaky start is remedied as the film progresses.

The middle of the film, when the Morgan brothers discover that blood and bone made with the freshest of ingredients – live flesh – would enable their brand to sweep the market, is the most engaging portion. The “stakes” are never truly raised to edge-of-your-seat levels, but the filmmakers’ generosity with gore maintains levels of anticipation. For emotional kicks, the strained brotherly relationship is touchingly funny, even dishing up some real pathos on both sides of the coin. Also worth mentioning is Sophie’s amusing attempts to exploit Reg’s infatuation which certainly drew laughs from the midnight audience. But don’t expect that 100 Bloody Acres is attempting to make any grand statements about or insights into anything. As a midnight screening for a so inclined-audience, it could very well be a consistently funny time, at least before the film almost loses momentum in the final third. But in a genre market inundated with first timers and veterans due for retirement, 100 Bloody Acres certainly earns its place somewhere in the middle…of nowhere…